Piecing together the story of the Brontë-Heger letters

Jennifer O'Grady is confused by certain discrepancies between different accounts of what happened to Charlotte's letters to M. Heger. She has sent the following queries in the hope that someone may be able to throw light on the aspects she finds puzzling.

"I am not a Brontë scholar; I am a poet, and for a piece of writing I am contemplating, I am trying to understand exactly what happened to the Brontë-Heger letters. Specifically, when were they thrown away by M. Heger and when preserved by Madame. Heger obviously had them in his possession when he met with Mrs. Gaskell in 1856; had they already been torn up and repaired then or did this happen after that meeting?"

Eric Ruijssenaars directed Jennifer to M. H. Spielmann's 1919 article "The inner history of the Brontë Heger letters" (included in the bibliography on our website). However, Jennifer wasn't wholly convinced by Spielmann's account:

"Heger provided Mrs. Gaskell with extracts from two of CB's letters to him, for the Life. Gaskell, it seems, also either saw or read the letters when she met with Heger in 1856. Does that mean that Heger saved these letters for some years, and only tore them up after he met with Gaskell? Spielmann was apparently told by Heger's daughter Louise that Heger tore each one up at once after reading it (except for the first), and that Madame repaired them and kept them in secret. Were the letters already repaired by 1856? I realize it must seem like a small point (and there is probably some simple answer that I have missed or have not yet come across) but understanding this would help me very much.

"Margaret Smith, in Volume I of her Letters of Charlotte Brontë, says that the first three letters were torn and sewn back together. She (Smith) attributes the repairing of the first two letters to Madame Heger, but the third one was also repaired. The first two were the letters from which Heger extracted for Mrs. Gaskell. If this is right, then it all seems rather mysterious to me.

"I suppose the general belief is that Heger tore the letters up after reading them and Madame patched them - and must have somehow convinced M. Heger to keep them, since he had some or all of them for Gaskell? However, acceptance of that seems to pose more questions for me. For instance--isn't it odd to think of Gaskell or anyone looking at letters that had been sewn together? How would that have been explained? What would she have made of such an explanation? And how did the letters later wind up with Madame and why was it apparently kept a secret from M. Heger, as Louise/Spielmann indicates? (After Madame dies, when Louise shows M. Heger the letters, she says he looked at them with astonishment. ) For me, unless I'm missing something, fewer questions are posed by imagining that the letters were retained whole by Heger until 1856. Is it possible that Louise Heger was not remembering correctly or was remembering what was convenient to remember? These are rhetorical questions, and perhaps I am making a mountain out of a molehill, but if anyone has any thoughts I would greatly like to hear them.

"On a related note, I was reading Clement Shorter's Charlotte Brontë and her Circle. He claims that CB ran into Laetitia Wheelwright in London, after CB was famous. According to Shorter, L. Wheelwright asked CB if she still corresponded with M. Heger. CB told her that Heger mentioned in one letter that his wife did not like the correspondence, and he asked her to address her letters to the Royal Athénée. "I stopped writing at once," said CB. "I would not have dreamt of writing to him when I found it was disagreeable to his wife; certainly I would not write unknown to her." (Quotes are Shorter's, of course). I thought this was interesting, especially because the last surviving letter from CB to Heger (the one that was not torn up according to Margaret Smith) was addressed to the Athénée. Perhaps this early account has since been discredited, but I did think it was odd and interesting!"

Would any of our readers like to comment on this?
Posted by Helen at Thursday, March 29, 2007 5 comments:

Presenting the Brontës in Brussels - in French

Like Charlotte and Emily Brontë before her, Brussels Group member Sheila Fordham, who moved to Brussels recently to work at the European Parliament, is attending French classes. And like them she is sometimes given "devoirs" by the teacher.

The latest assignment was to give a presentation in French to the rest of the class on a subject that really interested her. Choosing the subject was easy: of course Sheila spoke about the Brontës and our Group!

She started by telling the other members of the mixed-nationality class who the Brontës were, which was just as well as only the teacher (who is an enthusiast, having read Jane Eyre three times) knew anything about them. She went on to talk about the Brussels connection, using pictures and books as visual aids.

Thanks to Sheila's enthusiasm she succeeded in interesting the other students. Like Charlotte after handing in a particularly good French essay, she can feel the satisfaction of a "devoir" well done. She has practised her French while fulfilling the duty of every conscientious member of our Group - spreading the word about the Brontës in Brussels!
Posted by Helen at Thursday, March 29, 2007 No comments: 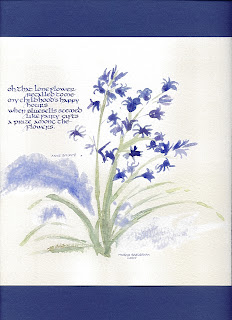 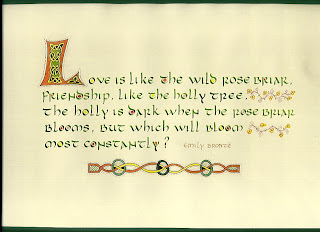 The editor of the Bronteana blog has drawn our attention to her resource site, which contains illustrations of Villette and Jane Eyre and other material that may be of interest. You can find it at http://bronteana.bravehost.com/

The Villette illustration page is at http://bronteana.bravehost.com/villette.html
Posted by Helen at Sunday, March 11, 2007 No comments:

I am happy to announce that the website of the Brussels Brontë Group is now on-line.
Check out the address at: www.thebrusselsbrontegroup.org.
It has a lot of information, interesting features, links , excellent photos and images, all centred around the Brontës in Brussels.