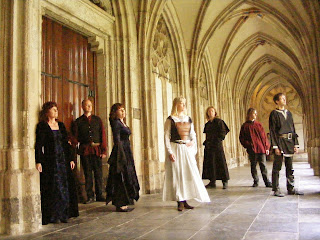 A perfect match, made in heaven : Celtic Music and Emily Brontë!

As a Brontë enthusiast, and in particular an Emily Brontë fan, I was delighted to learn about a project which is at present going on in the Netherlands.
A Dutch band, called ANOIS (the Gaelic-Irish word for “now”), is at the moment working on a CD which is to combine Emily Brontë poems and Celtic music. We were contacted by Veronica Metz, who is the main vocalist of the band, and who composes and performs most of the songs.

Anois was founded at the end of 1996 and is based around the vocals & compositions of lead singer Veronica Metz. The band has in the past been inspired by the writer J.R.R.Tolkien (“Lord of the Rings”) but also by other musicians such as Deanta, Enya, Loreena McKennit and Clannad.
On their website, which is worthwhile visiting (www.anois.nl), they describe their music as being “poetic Celtic music”.

For their present project on Emily Brontë Veronica and her band have given their personal musical interpretation to a number of Emily Brontë poems.

A few of the poems used are:

The songs are beautifully performed by Veronica with her “angelic voice from heaven”, assisted by excellent musicians and backing vocals. This is the music I like to listen to and the texts being Emily’s words make it for me THE PERFECT MATCH!

Have I raised your interest? Do you want to know more? You can contact Veronica Metz (veronica@anois.info), or visit their website (www.anois.nl)