A hundred years ago: the Pensionnat demolished 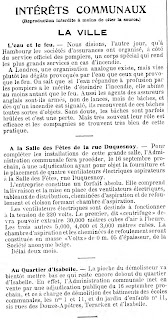 It is now, in the first weeks of autumn, exactly 100 years ago that the Pensionnat building was torn down. A sad anniversary.

At the beginning of September the final decision had been made, and published in newspapers. The illustration here is from the Chronique des Travaux Publics (4 September 1910): "The pick-axe of the demolisher will soon bring down what is left of the old Quartier Isabelle".

At this time the Pensionnat had become an 'ordinary' school, an 'école communale', as it was named in this note.

Much of the quarter had already been torn down in the previous year. It seems likely that this demolition work will have started at the end of September, and will have taken several weeks. It is not entirely clear but it very much seems that by 1 November the Pensionnat was no more. It will never be forgotten though.