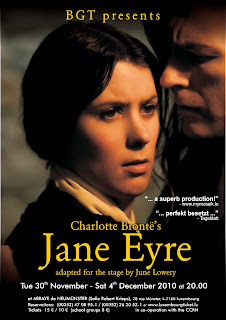 On Friday 3 December I made the three-hour train journey from Brussels across the snow-covered Ardennes to see June Lowery’s stage adaptation of Jane Eyre performed by the Berliner Grundtheater, an English-language theatre company which performs frequently in Luxembourg. The play was being premiered there with a mainly Luxembourg-based cast.

A more romantic setting for this most romantic of stories is hard to imagine: the arts centre in the magnificently renovated Abbaye de Neumunuster down in the picturesque Grund quarter. At this time of year the quarter was particularly beautiful, the snow sparkling with the Christmas lights.

June Lowery has been involved in drama since her university days when she helped her future husband with the lights for a student production of Hamlet he was directing. They set up the Berliner Grundtheater 20 years ago.

She re-discovered Jane Eyre through reading Stephenie Meyer’s Twilight novels with her daughter. She wrote the script in 5 months - somehow combining the work with her roles as a manager at the European Commission and mother of two children- after she and her husband, Tony Kingston, met their Jane (Jacqueline Milnes).

The play was directed by Tony and produced by June who also took the role of Mrs Fairfax. 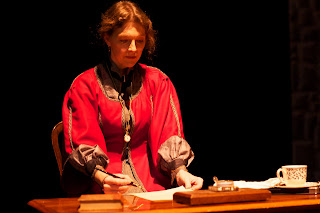 It is an ambitious staging, every essential scene of the novel packed into the two-and-a-half hours, with a huge cast and a striking set design, stairs up to a higher level being used to different effect for Gateshead Manor, Lowood School and Thornfield Hall where of course they lead up to the attic!

As usual in English-language productions in Luxembourg and Brussels, the cast was multinational, with a Danish Rochester, for example. The cast’s multilingualism came in useful: Adèle spoke in impeccable French as did Jane when required (Jacqueline Milne is Irish but was brought up in Luxembourg).

Charlotte Brontë’s interest in foreign languages was one aspect of the novel that attracted June. Jane loves French, learns German, even learns Hindustani. This made the play particularly suited to the babel of tongues that is Luxembourg. In preparing the show, June met fans who had read the novel for the first time in French, Spanish, Greek, Romanian, Slovakian….

Two other aspects of the novel seemed to June timely and modern: the treatment of sexual passion, and of religion. Charlotte Brontë acknowledges the force of sexual passion and frankly analyses Jane’s dilemma when torn between love and principle. As for religion, while the framework of the novel is Christian – Rochester must be punished and repent before he can be united with Jane – the emphasis is on tolerance and forgiveness. Brontë has no time for the strict and narrow-minded religion of Brocklehurst and St John Rivers.

The Brussels Brontë Group has several members in Luxembourg, who have been known to spend hours on trains in order to attend our events. I hope there will be lots more “trans-Ardennes” exchanges!