The Literary World was a New York based weekly magazine published between 1847 and 1853. Recently I had a little bit of time to look at its year 1853. I presumed they would have a review of Villette, probably in March. This indeed proved to be the case. On the 19th of that month they had quite a lengthy review, though much of it was quotation from the novel. “We must do ourselves the pleasure of quoting the capital description of Miss Snowe’s first introduction to the school room”. It also gives the “description of Rachel’s acting … equal in intensity to the great actress’s best efforts”, and it quotes the last page of the book, “a most admirable example of concise, powerful writing.”

It certainly is a positive review. Here are the opening lines:
“There is a freshness about the books of Currer Bell which we find in no other writer. She seems to cast herself loose from all novel writing precedents, and constructs from beginning to end, after her own fashion. Her independence is shown in the choice of a heroine. She takes a plain looking woman, with no graces of manner or speech, unpropped by rank or fortune. The heroine tells her own story. At the outset we dislike her; she takes no pains to ingratiate herself, but, on the contrary, turns the rough side of her character to us. As we read on, we are, in spite of ourselves, interested in her adventures.” 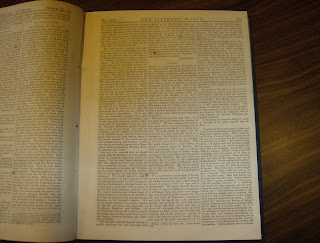 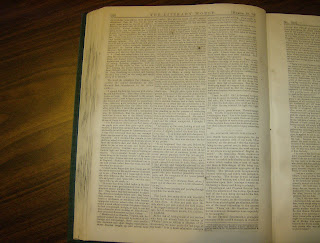 Like The Athenæum in England this magazine also realized immediately that the novel is set in a fictionalized Brussels. In London, it describes, Lucy “takes passage for a port in Labassecour, and journeys thence to Villette – a happy name for the snug little capital, the miniature Paris, Brussels.”

“Caroline No”
On 15 October the magazine ran an article about ‘Anonymous works’, which attempted to reveal a number of writers’ pseudonyms. The ninth book was “”Jane Eyre,” 1848, by Caroline Bronte (who has since sent out “Shirley,” and “Vilette [sic],” though of conceded talent, producing less sensation, under the pseudonym of Currer Bell; the only survivor of three sisters; one other of whom is also known to the reading world.”

The article also has Mrs “Gaskill”. The magazine earlier in the year had a very positive review of her Cranford.

Advertisements
The magazine does have one advertisement for the American Villette, published less than two months after the English edition, by Harper & Brothers. Apart from that there was only one Agnes Grey ad – “By the author of “Jane Eyre,” “Shirley,” etc”. This book was published by T.B. Peterson’s.

In November it was reported that much of the publishing house of Harper and Brothers had been destroyed by fire. 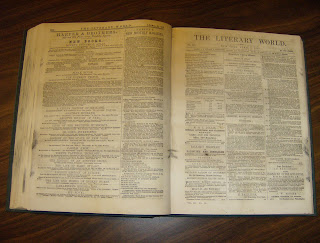 Other authors
Thackeray (who, in 1853, was in the US) and Dickens (who in that year published Bleak House; January e.g. has a few articles about spontaneous combustion) often feature in the magazine. There are two articles about Rachel, apart from the Villette review. Unfortunately The Literary World stopped at the end of the year, suddenly it seems.

My main topic of research here, this year, is a man named Abraham Staets, who came to New Netherland in 1642, so it was nice to find a literary reference related to my research. The magazinehad several articles about New Netherland, including a curious little article about Dutch Van - names in a story written by the American author J. Fenimore Cooper. After a lengthy list of these names the writer adds that there's also a Van Staets in it, but that as far as he knows this name was never written preceded by Van.