Late in the evening of 9 January 1890, Claire Zoë Parent (b.1804) passed away at Rue Ducale 13, suffering from double pneumonia. In the Brussels Brontë story, she holds a prominent role of course, as directrice of the Rue d'Isabelle pensionnat which Charlotte and Emily attended in 1842–43, and as part model for the characters of Madame Beck (Villette) and Zoraïde Reuter (The Professor) in Charlotte's novels. Much has been written about her in Brontë-related literature, yet the story of the house where she lived out her final days has never been told. It is a story which offers some interesting details.

Rue Ducale is one of the more attractive streets in today's Brussels. Beginning at the Place du Trône near the Royal Palace, it runs along the east side of the Royal Park, past the Belgian Parliament buildings, to end at the Rue de Louvain. It is one of the main axes of the neo-classical Quartier Royal, built in the late 18th century. Fortunately the street has been spared unsightly reconstruction projects over the years, and retains much of its original, harmonious architecture. It lies but a short distance away from where the Rue d'Isabelle and the Parent-Heger Pensionnat once stood. The street has many literary connections. In 1816, Lord Byron stayed briefly at Rue Ducale 51, where he is said to have composed several stanzas of Childe Harold's Pilgrimage.


In May 1889, Zoë and her husband, Constantin Heger, accompanied by their daughter Louise, left Rue d’Isabelle for Rue Ducale 13. Their new home was a three-storied, neoclassical maison particulière, modest in size compared to other, more palatial houses on the street, but no less elegant. They had not bought their new house, they were only renting it out. Doubtless it was an expensive place to rent, but at this stage the Hegers were a relatively prosperous middle-class family, and were well able to permit themselves some luxury. After Zoë's death, Heger and his daughter remained at Rue Ducale until June 1892, before moving to Rue Montoyer 72 in the nearby Quartier Leopold.

For anyone looking for Rue Ducale 13 today, there is a surprise in store. As one goes along Rue Ducale from the Royal Palace towards Rue Zinner, the house numbers pass from 11 to 15, with no number 13 in between. Yet, with the help of some Brussels City Archives documents, this missing number can be explained. During the period 1892–1912, houses 9, 11, and 13, owned by the Comte t'Kint de Roodenbeke, underwent a series of transformations. As a result, house number 13 was incorporated into number 11. The number 13 was formally cancelled by Brussels City authorities with effect from 28 January 1913. 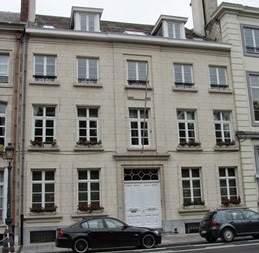 Rue Ducale 11[see photo] now appears to belong to the BNP Paribas Fortis Bank; meanwhile, number 15 is occupied by the Swiss Embassy. Indeed, over the years, several houses on Rue Ducale and its adjacent streets have served as important diplomatic buildings. The United States Embassy on Boulevard du Régent stands about two hundred meters away from the house the Hegers once occupied. The Embassy is a highly protected place, and security guards are rather nervous of people taking photos anywhere in the vicinity.

Besides its Brussels Brontë connection, Rue Ducale 13 has other reasons to be considered a special Brussels address. For decades it was the home of Jules Van Praet (1806–1887), who served as secretarial minister to both King Leopold I and King Leopold II. Bruges-born Van Praet had a huge influence on the political and diplomatic affairs of 19th century Belgium. Today’s Brussels has two streets named in his honour – Rue Jules Van Praet in the city centre near the Bourse, and Avenue Van Praet, which leads to the Royal Palace of Laeken. Van Praet moved out of Rue Ducale some time shortly before his death in 1887; his house remained vacant until the arrival of the Heger family.

Van Praet was not only an accomplished diplomat, he was also a dedicated art lover. His residence on Rue Ducale was renowned for its rich art collection. Works by painters such as Géricault, Delacroix, Corot, Millet, David, Ingres, and Goya adorned the salon walls.

Charles Baudelaire, the doomed French poet, visited Rue Ducale 13 in 1864 to meet Van Praet and to visit his private gallery. He took an instant dislike to Van Praet, as he did to just about everyone in Belgium at the time. He left a rather caustic poem about their encounter, entitled L'Amateur des Beaux-Arts en Belgique, the first lines of which read:

Unfortunately, Van Praet's now priceless art collection was not saved for the Belgian nation, and ended up in various museums collections around the world. Louise Heger (1839–1933), daughter of Constantin and Zoë, was a hardworking impressionist painter; she might have been pleased to move into Van Praet's former home, which once housed so many notable artworks.

The Hegers had prominent neighbours on the Rue Ducale in 1890. Former Belgian premier ministre Frère-Orban (1812–1896) lived a few doors away; other neighbours included a countess, a senator, a retired army lieutenant-general, and several doctors and lawyers. In his younger days, Constantin Heger felt somewhat out of place when presented to the upper echelons of Brussels society. Yet now, in his latter years, he was living on a street reserved for the city's elite.

And it was here, at this splendid address, that his beloved partner Zoë was to die. Constantin fell ill soon after her death; he never fully recovered from his illness and died six years later, in 1896.