It is remarkable that the end of the journey around the world coincided with reaching the 400th translated edition. It is the Finnish Villette that had already been announced at the beginning of the year. This Syrjästäkatsojan tarina was published on 27 February, by WSOY again (743 pp.). As expected it is the old Tyni Haapanen-Tallgren translation. It’s the 8th edition since 1921. She’s getting close to a century.


The Danish Villette that was intended to be published on 1 March has been delayed, thus missing the chance to become nr. 400. The new publication date is now 21 April. It is a new translation, by Christiane Rohde, who has also translated Lewis Carroll’s Alice and two Wilkie Collins books. This Villette is published by Gyldendal from Kopenhagen, and has 632 pages. The cover has recently been made available.


There is no news on the Brazilian The Professor set to be published this year, which is the current nr. 402.

New statistics
Presumably all translated editions that have been published around the world up to the summer of 2016 have now been found and described. It is quite possible that a few more recent ones will turn up, so it will take some time before we know which edition really was number 400. The 300th was published at the beginning of 2009. It’s gone fast since, as the following graph shows. 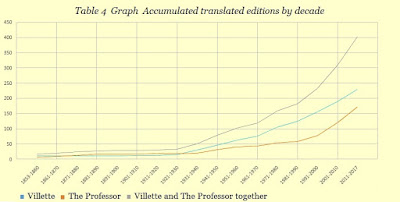 PS. It would be interesting to hear about your favourite covers, now that all have been presented.
Posted by Lisbeth @ The Content Reader at Monday, April 03, 2017