On Sunday morning the UK Brontë Society group were not too exhausted by the long afternoon at Waterloo the previous day to enjoy a guided walk by Jones Hayden around the site of the Pensionnat Heger and other places known to Charlotte and Emily around Place Royale. 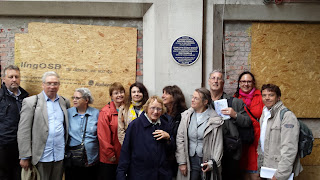 The group was joined by a couple for whom our Brontë tour was part of rather a special weekend, Guy and Evy from Menen near Ypres. Guy is head of the Menen tourist office, Evy a researcher at the Memorial Museum Passchendaele 1917. Guy had planned a romantic break for the two of them in Brussels which he called a ‘proposal weekend’; he was going to ask Evy to marry him, and knowing her interest in the Brontës, he booked our tour as part of the programme he had put together to impress her.

‘The proposal weekend and the Brontë walk was a surprise organised by Guy, I just knew when to pack my bags, destination unknown.

‘I have always been interested in 19th century English literature, especially the Brontës, Jane Austen, Mary Shelley, etc. - how these authors stood up for themselves in a male-dominated society and pursued their passion for writing. And of course the love stories with sometimes unrequited love.

‘What I particularly enjoyed about the walk was finding out more about Charlotte’s and Emily's stay in Brussels. I was surprised that they had been near places I once just passed without knowing the Brontës walked there once and without noticing the memorial plaque where the Pensionnat Heger once was. It changed my view of that part of Brussels. I knew they had stayed in Brussels for a while to teach and that Charlotte returned to Haworth after her love was unanswered. But I wasn't aware of all the details of their stay and the exact places that are connected to the Brontës. About five years ago, I visited the Brontë Parsonage Museum in Haworth and I am still very impressed by the visit and the journey to Haworth and Yorkshire.’

Both agree that they will always remember the tour as a wonderful part of a wonderful weekend. They have joined the Brussels Brontë Group and we look forward to seeing them back here soon. (Evy said ‘Yes’, by the way.)