The re-enactment of the Battle of Waterloo 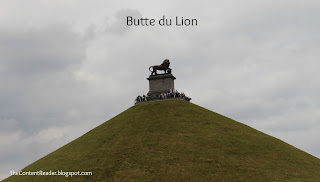 Saturday the 20th of June 2015 was a particularly memorable day. Starting at 10.00 a.m. we were treated to a superbly enthusiastic talk by Emma Butcher on the Bronte heroes, Wellington and Napoleon and the Juvenilia which to my discredit I knew little or nothing about. The talk was followed by a relaxing lunch where people mingled and set the tone for the subsequent coach journey to Waterloo. As we stepped into the coach a parade of French militia drummed its way behind us for a few minutes before the coach moved off, whetting our appetites for the afternoon.

We were blessed with a gorgeous day and our party walked up to the village where we split up. I spent the afternoon with Joanna and we trekked the considerable distance to the French Bivouac.
Because of the great distances choices had to be made so the Allied Bivouac had to be missed. I have to admit a great deal of our enthusiasm was actually looking for loos which were pretty nonexistent unless actually on the site. 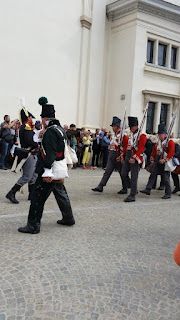 The village was full of buzz and the museum is a must, gone is the musty red velvet shabbiness and in its place a very well thought out museum interesting for any age. Standing on the side of the road near the museum we were treated to all the armies coming past, a really brilliant spectacle, the re-enactors had really made every effort to look authentic. My claim to celebrity fame for the day was being brushed aside by Jeremy Paxman. Have to say he is a good looking chap. 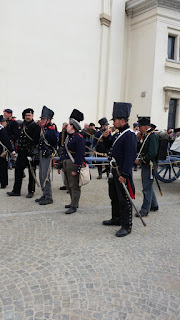 The battle began on time and the seating was fairly well organized. The atmosphere was very good even when Napoleon rode past with many spectators shouting ‘vive l’Empereur’. We did the British thing of pretending not to hear. There was a lot of commentary but I think it would have been better had we been told what was actually happening. A lot of smoke, canon fire and not much movement but the 3 hours (we were meant to be in our seats at 19.00) just flew past. 6000 re-enactors from all over the globe (even got talking to a group of Canadians who participated) took part and to choreograph that was no mean feat.

I think it was an extremely good experience but I did not get the idea that we were actually watching a battle, did not see many wounded or fallen soldiers but the cavalry did have a lot of fun. With around 60.000 spectators at each performance, leaving the site was dramatic and although the weather was excellent all day, the minute the show was over it started. That kilometer from the site to the car park where the buses were waiting took nerves and patience and more than 1 hour and then finding the coach amongst the 500 in the car park was no joke either but no one really minded and a very good day was had by all. I would not have missed it for the world. 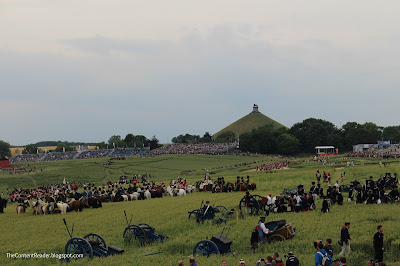 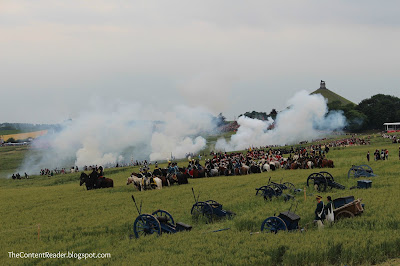 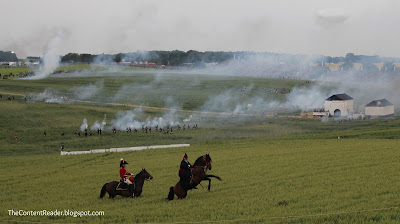 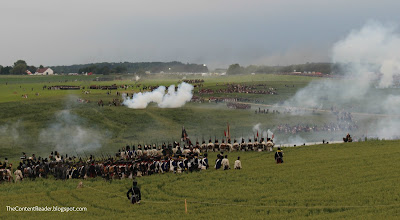