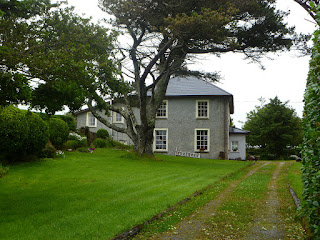 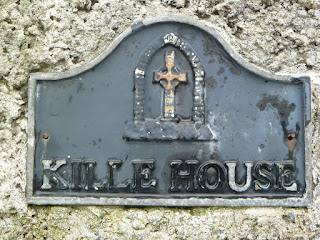 My husband Paul, who is becoming a real “Brontë-detective”, has now discovered some exciting news:  Kill House seems to be on the market for sale.

The publication by the estate agent gives some detailed information on the history, the remarkable connections and the interior of the house.  The name “Kill House” derives from an ancient and very large area called “Kill” which means “church” in Gaelic. This could also suggest that an important ecclesiastical community could have existed in this area. Indeed, the ruins of a small and very old church are still visible underneath the ivy. 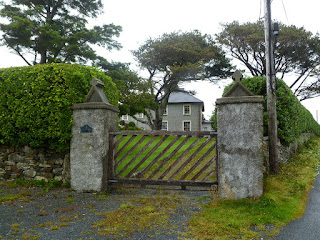 The house as it appears today, was built in 1861 by John Evans Adamson after he acquired Kill Cottage and Kill estate with 200 acres of land in 1854. In that year John married Harriette Bell (daughter of Alan and Harriette Lucinda (Adamson) Bell from Banagher). John and Harriette were distant cousins. Together they had seven children.

The original Kill cottage was a small stone house, and became very cramped for the expanding family. So a larger home was required. The new house was completed in 1861 and had become a stately mansion. It was built entirely of stone and contained ten large rooms.

John died in 1869 at the early age of 47. His wife Harriette was unable to cope with the hard work at the Kill estate. So she decided to leave Connemara and go back to Banagher to live with her relatives. Kill estate was finally sold to a captain Thompson.

According to the information from the estate agent, the house has been renovated and restored sensitively and meticulously  with major attention being given  to maintaining as much as possible of the original features and the historical architectural details. That is why many authentic features dating back to the origin of Kill House have been preserved. The majestic staircase, many floors, most of the doors including their locks, the roof structure and some of the historic sash windows have survived and are still in place. Almost all historical casement shutters are also still existent and fully working (which is a rare detail in historic houses in these days).

The house itself is situated right on the edge of the Sky Road as part of the famous Wild Atlantic way, and, surrounded by beautiful mature gardens, natural stone walls, well-maintained hedgerows and a walled gated entrance, is “a haven of privacy  and serenity with magnificent, magical and unspoilt views in every direction of the Connemara mountains and sea”.

In our (= Paul’s and mine) opinion, an ideal location for our holiday retreat:  Fishing nearby and the Brontë spirit still lingering!


I was very excited when I saw the lovely  pictures from inside and outside the house.  As we are going back to the area this year, we might just try to view the house via the estate agent. With a bit of Irish luck, we might just succeed.

If only I had won the Lottery or Euromillions, I would certainly be tempted to make an offer immediately!

For the moment, I just keep dreaming…….

Wonderful post! Thank you for this information! It sounds marvelous. Given you and your husband's love of Ireland, I too wish you could put in an offer. The house would certainly be in good hands if you did! Thank you again!