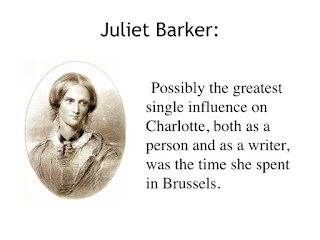 
Jones looked at various ways in which the Brussels experience is reflected in Jane Eyre. In Brussels, Charlotte wrote devoirs for Heger, as do the heroines of The Professor, Shirley and Villette for the male protagonists. Jane doesn’t write essays for Rochester, but she calls him her ‘master’ as Charlotte did Heger, and shows him her drawings – a similar means of revealing her character and aspiration.
Villette has been called a novel of revenge because of Charlotte’s supposed depiction of Mme Heger as Mme Beck. Did Charlotte also get her revenge on Mme Heger in Jane Eyre? Was Madame transmuted by wish-fulfilment into Bertha Mason, with Rochester finally free to marry Jane, in whom he finds his intellectual equal?


It wasn’t the first time we’d had a look at the Brussels experience, or Jane Eyre. Ola Podstawka’s subject, however, was a first, and it was one we’ve neglected too long: a man who, like Heger, had a considerable influence on Charlotte, particularly in childhood and youth. This was her brother Branwell, the only male Brontë sibling, whose life and character Ola examined in her presentation We need to talk about Branwell. We’ve been a little late in doing so, as it was his bicentenary last year, but better late than never.

It is Juliet Barker’s opinion that without Branwell, the sisters probably wouldn’t have become the writers they did. Ola looked first at some less positive images of Branwell in film: comic relief in the film Devotion, debauched Romantic artist in Téchiné’s Les Soeurs Brontë, ‘sobbing drunken mess’, as Ola put it, in the latest Brontë biopic, To Walk Invisible. 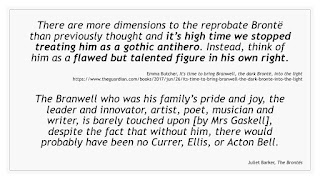 We then followed the chronology of his professional life. Every venture into paid employment ended in failure, whether as portrait painter or railway clerk. These ventures aside, how talented was he really? He was quick to learn, prolific as a writer – yet often derivative and undiscriminating, lacking in self-criticism.

Some of the questions that most intrigue Brontë enthusiasts centre on Branwell Brontë’s life and work. Might he really have had a hand in the authorship of Wuthering Heights? Did he have an affair with Mrs Robinson? What were the elements of his character that drove him self-destruction? Ola’s presentation provided a concise, well-rounded and balanced introduction to the Brontë brother.
It was wonderful to see so many of our members at this event. The two presentations were received with interest and enthusiasm and were clearly greatly enjoyed.