6 March, Sunday – W: 2 to 9 C, a very sunny day
On this day the Senne flooded, inundating parts of the lower city, as a result of all the rain in the previous days. There were floodings elsewhere in the country too.
On this morning, at ten o’clock, an exhibition was opened at the Temple des Augustins of paintings by Belgian and foreign masters, intended for the benefit of the needy people of the city.
For the first time since the sisters had arrived, a new ‘patent’ obtained by Abraham Dixon could be found in the newspapers. Since he was married to an aunt of the Taylor sisters they may already have met by then. 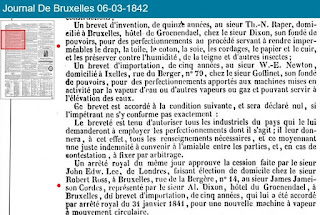 The second mentioning of him here shows him residing at the Hôtel Groenendael. This patent dates from 8 February, but another registration in l’Indépendant of 14 April still gives it as his address. (There will be more about the Dixons in a separate article.)

7 March, Monday – W: 1 to 9 C, bright morning, clouded afternoon
The conspiracy court case continued to attract much attention, in the newspapers and at the court scene (← 28 February). The Dutch press noted that regularly there were a number of beautifully dressed women attending, in the reserved places. They also reported that most of the accused seemed to be double agents. The group was certainly infiltrated enough to prevent any success, apart from being poorly organized. The aim had been to depose the Belgian king, and to reinstate the Dutch king, in the autumn of 1841. After some theatrical outbursts in court earlier, Mrs. Vandersmissen, one of the accused, had fallen ill now, supposedly. (→ 17 March)

9 March, Wednesday – 6 to 8 C, partly clouded, with a good amount of rain (6 mm). In the evening Belgium and France began to be hit by a storm of hurricane (“ouragan”) force
The Journal de Bruxelles reported that the Senne water level, after having decreased since Sunday, was rising again due to the newly fallen rain.

10 March, Thursday – W: 4 to 6 C, hurricane storm (a southwestern) at night and the morning, 10 mm rain, a very clouded day
It was another unlucky Thursday for the sisters had they wished to go out on their free afternoon. Although the wind began to subside then a bit, it did begin to rain. A number of chimneys got blown off in the city, but that seems to have been the only damage done. (The maximum wind force given here in the Annales table is 8, nowadays it would surely be presumably a 10.)
The newspapers reported that the “carcasse du City of Edinburgh” (← 3 March) was to be publicly sold to be demolished. The new storm however smashed the ship to pieces on this day.
They also reported about disastrous news from Afghanistan, for the British troops who had ventured an attempt to in some way conquer the country. They had reached Kabul months ago, but got completely isolated, and surrounded by hostile Afghans. Some high ranking soldiers were murdered, but it was now, thanks to the Bombay Times of 1 February, that they could bring the “longs et lugubres details sur les désastres essuyés par les troupes anglaises dans le Cabul.” And that news only went to the end of 1841. Much worse was to follow (→ 14 March). Branwell Brontë at least was interested in it. On 13 February he had written a poem called The Afghan War, when things already were known to not go well.
This day too saw an advertisement which shows that having one’s likeness taken became available for more people, although it was still expensive. Here it’s a daguerreotype picture. By some coincidence only a day later another ad offered the opportunity to do “portraits photographiques.”

11 March, Friday – W: 1 to 9 C, clouded
The waters of the Senne were beginning to flood the “prairies d’Anderlecht, Schaerbeek et Evere” again. At about 3 pm the Senne reached its highest level.

14 March, Monday – W: 3 to 11 C, gradually more clouds
News came in about the hurricane of 9/10 March having caused deaths and huge damage in The Netherlands, France and England.
There was more disastrous news from Afghanistan too. It became clear that the British troops had tried, in January, to escape from Kabul, but on their way to safety in India, they were practically all killed by Afghan forces. On this day it became known that only one man, a Dr. Brydon, had reached India, out of 6000 soldiers. (Although not mentioned, only a dozen or so of the ‘sepoys’ (camp followers) out of 12500 did so too.) A hundred or so persons, mainly women and children had been taken hostage, and brought back to Kabul

16 March, Wednesday – W: 5 to 13 C, clouded
On this day Charlotte completed her ‘devoir’ manuscript of L’Ingratitude, rediscovered some years ago by Brian Bracken (see this article).

17 March, Thursday – W: 6 to 12 C, clouded
There continues to be a large crowd at the conspiracy court case (← 7 March, → 25 March) and military measures have been taken, as if there is a fear of the people getting unruly, which was not the case. Madame Vandersmissen has recovered, she’s back in court, usually ‘elegantly dressed, with shining gemstones.’

18 March, Friday – W: 8 to 10 C, clouded, a pretty strong storm beginning in the early hours, with rain and hail after 4.45 pm
This Good Friday may well have been a holiday.
An advertisement in L’Indépendant shows that the British Queen (← 18 February, → 20 March) was to make its first journey to New York on 4 May. 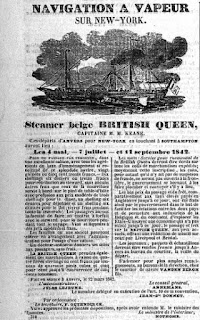 19 March, Saturday – W: 4 to 7 C, clouded, strong winds, rain beginning about 3 pm, a bit of thunder and lightning around 9.35 pm).
Saturday was it seems no free day, not even partly, at the Pensionnat. Today though may well have been an exception, as on this date the Catholics celebrated H. Joseph. It was a holiday later on at least. They again had not much luck though with the weather.

20 March, Sunday – W: 4 to 6 C, wholly clouded with a huge amount of rain (24.4 mm)
Belgian Parliament approves a war compensation act, for foreigners who suffered damage during the time of the 1830 uprising and the war with the Dutch that followed. One risk was that without it the British Queen (← 18 March) would be confiscated after arrival in New York.
L’Indépendant had an advertisement for the Revue Britannique, the magazine that exactly 13 years later began publishing La Maitresse d'Anglais, the first French translation of Villette. Here they had the memoires of Belliard, the man whose statue stood near the Pensionnat (→ 22 March). 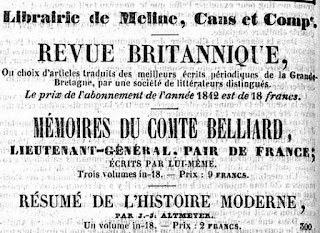 22 March, Tuesday – W: 2 to 5 C, clouded, with rain and wet snow in the afternoon
L’Indépendant reported about the last meeting of the Brussels city council. “M. Hauman, as well as his lawyer, have made it known that they wish to reach an agreement with the city after losing the court case about the construction and elevation of two buildings at the Passage de la Bibliothèque (place Belliard), which hide the view.” Two new houses, at either side of the Belliard Steps, opposite the Pensionnat, had grown rather tall, thus obscuring the panoramic view of the city, and there were lots of complaints about it. It’s an interesting matter, which will be dealt with in a separate article.
L’Indépendant also carried an ad for the sale of “un vaste et bel hotel” in the Rue Notre Dame aux Neiges, the street where in The Professor Frances Henri was living. All the references to this street in these years give some idea about this street, which will also be presented in a separate article later.

25 March, Friday – W: 2 to 6 C, a misty day
The conspiracy court case comes to an end (←17 March). Four men are sentenced to death (soon commuted to prison sentences), the others, including Parent and Mme. Vandersmissen, are acquitted. Again a crowd of 10,000 men was reported to be at the court building.
Recent research has shown that there was undoubtedly an attempt to conspire against the state, and indeed, that the Dutch king was involved in it. At a later stage, in September 1841 he withdrew from it. It doesn’t seem there was ever any chance of a successful coup.

26 March, Saturday – W: 5 to 8 C, quite a lot of rain, at night and in the early morning, and a heavy shower around 3.35 pm (6,7 mm), somewhat brighter weather in the afternoon though
On this day Charlotte and Emily visited Mary and Martha Taylor in Koekelberg – “such a happy day” Charlotte wrote in a letter begun on that day, written together with Mary and Martha, to Ellen Nussey. Because of Easter this may have been a holiday.

27 March, Easter Sunday – W: 5 to 8 C, clouded, some rain
‘Never before has the Holy Easter Day been celebrated by so many people, in all the churches of the city. The mass in music at St. Gudule was of a most beautiful performance,’ a Dutch newspaper reported.

28 March, Monday – W: 4 to 12 C, wholly clouded, drizzle rain in the morning
On this day, also an Easter holiday, Madame Heger gave birth to a son, Prospère.
Every month the newspapers gave the population figures of the preceding one for the city: Prospère was one of 398 births in March. There had been 455 deaths too, 55 marriages and no divorce (fairly similar to the figures for February, reported on 8 March). In the summer the number of births began to exceed the number of deaths.

31 March, Thursday – W: 7 to 11 C, clouded, a rainy afternoon and evening, a new big storm batters the country, from the beginning of the afternoon, ‘low and rapid clouds’ (→ 1 April)
L’Indépendant had two extra pages about the possibility of establishing a Belgian colony in Guatemala. It’s a recurring theme. Only four days earlier for instance such a letter had been published about Honduras.