Dutch sisters Maartje and Janneke Schut launched a website dedicated to the Brontë sisters (www.brontezusjes.nl) two years ago and started organizing talks on the literary sisters in the Netherlands. The latest talk was an April 13 discussion on Charlotte Brontë's Jane Eyre by Sarah Talbot, who teaches English literature at Amsterdam University of Applied Sciences.

A small contingent from the Brussels Brontë Group took a road-trip to make a Dutch Brontë day of it across the border in Bussum, a town about halfway between Amsterdam and Utrecht. Marcia Zaaijer, a founder member of the Brussels Group who lives in Rotterdam, met us for lunch before the talk – at the appropriately named café Heidezicht (“view of the moor”). At the talk, the Bronte Zusjes had promised an “English treat” -- which turned out to be delicious scones and jam with little High-Tea sandwiches.

Sarah Talbot started her Jane Eyre talk at the beginning -- diving into the first two paragraphs of the novel in an interactive discussion. She noted how repetition of ideas creates a mood of oppression right from the outset. Allusions to the weather are bleak: the cold winter wind, chilly afternoons and raw twilight. And phrases like “no possibility” and “no company” and “out of the question” give a feeling of limitation.

But the first few chapters also show a protagonist who has a strong sense of right and wrong, knows her own worth and stands up for herself. “Speak I must: I had been trodden on severely,” Jane tells the reader. “How dare I?  Because it is the truth.” Overall, the character of Jane Eyre constitutes a marked contrast from the heroines of Samuel Richardson's popular eighteenth-century novels, Talbot said.

If Jane represents a new type of heroine, the novel also includes a new kind of hero, she said, showing a slide of such Byronic personalities as Napoleon, Elvis Presley and Dutch rock star Herman Brood along with Mr. Rochester. Talbot made the point that the character of the Byronic hero – the dark, brooding, smoldering anti-hero – ultimately stems from John Milton's Satan.

That led to a discussion of what attracts Jane and Rochester to each other. Amid numerous suggestions about their similarities, Talbot summed it up: “They are searingly honest with each other” – a fact that comes across strongly in the scene where Rochester looks over Jane’s art work. But Jane also has a lot in common with Bertha Mason – both are passionate, both are abandoned, both marry Rochester. And they both are described as untamed animals, Talbot said: Early on in the novel at the Reeds’ house, Jane is called a “rat” and a “mad cat”. 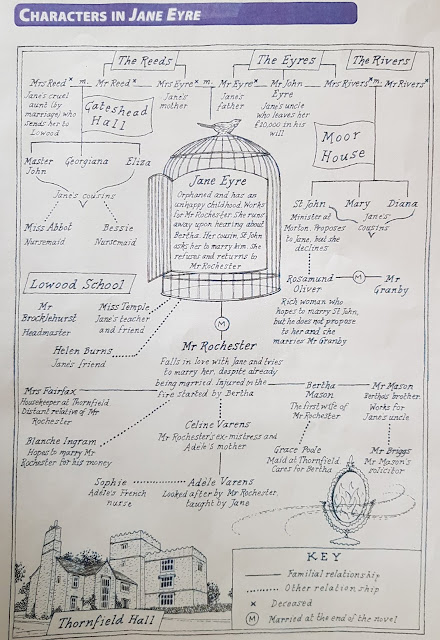 Bertha also is one of the Gothic elements in the novel, the unknown “other” haunting the house. Other Gothic elements include the scary red room at the Reeds and the lightning strike on the chestnut tree – “The tree splits apart but the root remains whole,” Talbot pointed out. She also highlights the “real Gothic element” in the story – when Jane and Rochester communicate with other across the vast distance of the moor. This is not imagined or mis-characterized – Jane heard Rochester’s call and Rochester heard her reply, Talbot said.

Though “the mad woman in the attic” can be seen as merely a Gothic plot device in Jane Eyre, Charlotte Brontë packs a lot into Bertha as Jane’s alter ego, Talbot said, calling Bertha her favorite character in the novel. But Bertha is “irredeemable’’ and doomed in Charlotte’s story. “Making Bertha a monster allows Rochester to be redeemed in the end,” even if that means “he has to become less of a man,” Talbot said.

“In the end, everybody gets what they deserve,” she said. “Rochester had to come down. Bertha had to go.”
Posted by JH at Thursday, April 25, 2019