Patsy Stoneman, Emeritus Reader in English at the University of Hull and distinguished Brontë scholar, on Oct. 12 gave us a fascinating critical tour of some of the highways and byways of Brontë biography, editions, critical works and biographical fiction. Her lucid and trenchant route-map through this changing, variable terrain was much appreciated.

It was after reading Elizabeth Gaskell’s The Life of Charlotte Brontë (1857) that Patrick Brontë commented that the author should be permitted “a little romance” – saintly forbearance considering that Mrs. Gaskell had described him as “the strange, half-mad father” – and Dr. Stoneman used this first biography of Charlotte Brontë as a starting point in her discussion of different types of Brontë writers and the difficulties for unwary readers who can so easily be led astray by a blurring of fact and fiction. 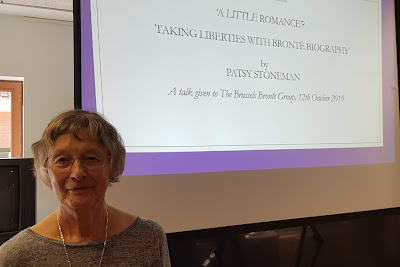 We started with writers using known facts as the basis for serious biography, but, as Dr. Stoneman pointed out, even in this apparently limited field there is great variety. Mrs. Gaskell had the inestimable advantages of being a contemporary and knowing her subject personally, but she also had to deal with contemporary mores, her own prejudices and a novelist’s tendency to romantic exaggeration which led her to paint a highly coloured picture of life at Haworth parsonage and to suppress or gloss over anything she thought might be prejudicial to her friend’s reputation.

Later biographers are faced with different problems and have tried different approaches: should they follow the rules of serious biography and base their work on known facts? And if so, how can they disentangle fact from fiction? balance differences of tone and intention in letters written to different people and in memoirs and diaries? deal with gaps in correspondence and documents that have been forged and doctored? assess facts for which there is little or no evidence? Dr. Stoneman, who also is vice president of the Brontë Society, gave some examples of the different conclusions reached by serious modern Brontë biographers: Juliet Barker’s The Brontës (1994) revised Elizabeth Gaskell’s picture of Patrick Brontë, whereas Claire Harman’s Charlotte Brontë: A Life (2015) is closer to Mrs. Gaskell.

Or will the author decide to “work loose from historical moorings”? Canadian literary theorist Linda Hutcheon coined the term “historiographic metafiction” in the 1980s to describe works of fiction which combine authorial imagination with actual historical events and personages and, as Lucasta Miller pointed out in The Brontë Myth (2001), the Brontës, unlike other writers, are particularly the subjects of fiction and myth: there are over 30 works purporting to be Brontë biographies.

These come in different forms and are more or less fictional, misleading or useful additions to works about the Brontës. Some authors distinguish between fact and fiction, embedding their imaginative and perceptive contributions in known fact. Sarah Fermi’s Emily’s Journal (2006), for example, is a classic historical biography based on what we know and particularly what we don’t know about Emily, for whom the author invents a lost diary which dovetails with known facts. But others falsify fact or confuse it with fiction: James Tully’s The Crimes of Charlotte Brontë: The Secret History of the Mysterious Events at Haworth (1999) is based on an invented story, falsified documents and a final editorial apparatus that distorts facts and could persuade the unwary reader that this a serious biography.

However, there are others who make no serious historiographic claims but gallop to the sunlit fictional uplands of extravagant or outrageous invention, such as Laura Joh Rowland in The Secret Adventures of Charlotte Brontë (2009) and Bedlam: The Further Secret Adventures of Charlotte Brontë (2010) in which Charlotte is involved in secret investigations and the thwarting of skullduggery involving Queen Victoria, Thackeray, a mad scientist and the Great Exhibition; but crazy though the invention is, the author sticks to the known timeline and facts so there should be no confusion in the reader’s mind when they finish this. There are other cheerful fictional riffs on the Brontë theme, including an interesting category which considers the effects of Brontë reading on later readers, such as Rachel Ferguson’s The Brontës Went to Woolworths (1931) in which three sisters living in 1930s London share a vivid imaginary life and are so immersed in Brontë fiction that they receive a ghostly visitation from Haworth … Would the Brontës approve of Woolworths? I won’t spoil if for you.

However, as Dr. Stoneman pointed out, it is important to bear in mind that although myth and fiction can provide useful insights and some amusement, they take us close to dangerous territory where fact and fiction become blurred and the unwary reader becomes so lost in a miasma of confusion that they can no longer tell the difference and may go on pilgrimage to the Brontë museum in Haworth anxious to ask the guides, as did one confused visitor – so which sister married Heathcliff?