Cathy and Heathcliff in Brussels 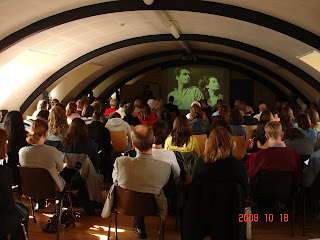 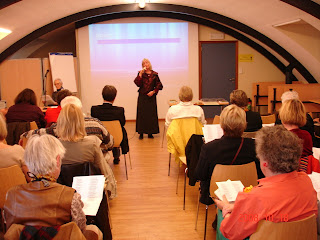 On Saturday 18 October, exactly a year after organising its first talk, the Brussels Brontë Group once again brought the Brontës to a Brussels audience. The talk hosted by us last year was on the theme of Charlotte's anguished letters to M. Heger. A journalist in a Brussels magazine announcing that event, getting a little carried away himself, invited people to "close their eyes and let themselves be swept along by this torrent of passion". This year we again invited our audience to be swept along by a torrent of passion, but with their eyes open not closed, gazing at a screen on which they could watch Heathcliffs and Cathies from various film versions (the 1939 Olivier one, the 1970 one with Timothy Dalton and the 1991 version with Ralph Fiennes) chasing each other over the moors.

The film clips were shown to illustrate a talk by Patsy Stoneman called What everyone knows about Wuthering Heights: the novel and its film adaptations. She pointed out that many people are not quite sure whether they've read the novel or not, as it permeates our consciousness. Her comparison of scenes in the films with the corresponding passages in the novel revealed how often we, the readers, supply in our imaginations scenes (such as those between the lovers on the moors) not actually described in the novel.

Patsy Stoneman's talk, which was received enthusiastically, was the first in our new venue in a university in central Brussels, Facultés Universitaires Saint-Louis. We have for some time been looking for a suitable venue and were delighted when some of the English lecturers at this university who support our events offered us the use of a room which is ideal for our purposes. The staff bent over backwards to make us welcome and help with all the practical aspects of the organisation, and staff and students from the English language department, who had prepared for the talk beforehand, attended the event. In all over 80 people were present.

After the talk we wound up with some music before partaking of the refreshments offered by the university. The music was supplied by a Dutch member of our group, Veronica Metz, who is the lead singer of Anois (www.anois.nl), a Celtic band which is recording an album of Emily Brontë's poems that she has set to music. With recorded accompaniment, she sang four songs to haunting melodies a little reminiscent of Enya's. Another member, Marina Saegerman, had prepared a display of her calligraphy versions of Emily's poems.

We are looking forward to our next event to be held in the same venue, a Brontë weekend in April when Stevie Davies will be talking to us, also about Emily Brontë. Having hitherto concentrated more on Charlotte because of the influence of Brussels on her we are devoting this year to Emily, who of course also spent time in this city although there is less evidence of it in her work!
Posted by Helen at Tuesday, October 21, 2008 No comments:

A whole new webpage has been added to the website of the Brussels Brontë Group. On our Picture Gallery page, you will discover a new album, called Old Prints & Lithographs. It consists of several pages, showing wonderful images of Brussels and the surrounding area of the 1830’s and 1840’s. Some you may never have seen before.

If you have not yet seen all of our other pages, don’t forget to have a look; it has really interesting information on other historical themes, such as Brussels in the mid 19th Century and information on Charlotte and Emily Brontë, the Heger family and the Brussels novels; all with wonderful illustrations. Have a pleasurable exploration! 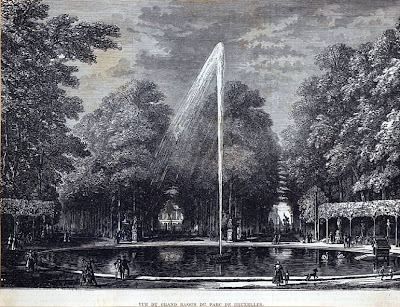