The death of Julia Wheelwright

Little more than a month after the death of Martha Taylor, another English friend of the Brontës, Julia Wheelwright, died in Brussels, on 17 November 1842. She was only seven years old. Again Winifred Gérin, without giving any evidence, attributed it to cholera, and again it certainly is not true. There was no cholera in the city, nor another serious contagious disease. It is just another Gérin lie.


Julia was at a still rather more vulnerable age. On the 30th of October she had reached the age of  seven. She had thus only just reached the stage of getting mentioned by name in the newspapers’  lists of the city’s registered deaths. Had she died three weeks earlier she wouldn’t have made it to the newspapers, but would only have been listed as one of those children under the age of 7 that had died.

We know nothing of her last days, which makes it rather difficult to try to assess the cause of her death. Charlotte and Emily had already left Brussels, following the news of their Aunt Branwell’s severe illness. An analysis of what we do know helps quite a lot though, to get to a good educated guess. As with Martha, a main question is whether or not it could have been a contagious disease.

The true cause of death of Martha Taylor

After about two weeks of illness Martha Taylor, the beloved friend of the Brontë sisters, died on 12 October 1842 in Koekelberg. It has become a fact in Brontë studies that it was cholera that killed her, but can this really be true? We do not know of any evidence. It is not that difficult to research this, and to find out what the alternative options are. It will show that Martha certainly did not die of cholera, it can already be revealed.

Cholera and other contagious diseases

The history of cholera as the cause
We need not be surprised that this history begins with Winifred Gérin. And by now we know she was a serial liar. In her 1967 biography of Charlotte she states without any doubt that it was cholera, but also without giving any evidence. In her biography of Emily she added that it was "a very prevalent infection in Brussels." It doesn’t help that at about the same time William Weightman died in Haworth, possibly indeed because of cholera, and after a similar fortnight of suffering from illness.

What we know from Charlotte and Mary
Although Charlotte didn’t witness either in their last two weeks, she thus compared them, based of course on real witnesses. “Mr. Weightman’s illness was exactly what Martha’s was – he was ill the same length of time and died in the same manner. Aunt [Branwell]’s disease was internal obstruction: she also was ill a fortnight.” (Letter of Charlotte to Ellen Nussey, 10 November 1842)

Mary only sheds a little bit of light on what had happened. In a letter of 1 November to Ellen she says she will give her the history of Martha’s illness in a few months. “A thousand times I have reviewed the minutest circumstances of it but I cannot without great difficulty give a regular account of them … But when I recall the sufferings that have purified her my heart aches.”

The Brontë Brussels Calendar: May 1842

1 May, Sunday – Weather: 11 to 22 C, largely unclouded
At the beginning of chapter 23 of Villette Lucy Snowe says that “on the first of May, we had all – i.e. the twenty boarders and the four teachers … notice to rise at five o’clock of the morning [for a] breakfast in the country.” It could well have happened this day. A Sunday would have been a good day for it. The weather certainly turned out to be very good for such an excursion.
The Journal de Bruxelles wrote about a City Council question, about whether it was true that pupils of the renowned Athenée Royale, where M. Heger was a teacher, had been insulting people after leaving their classes (← 28 April, → 2 May).

2 May, Monday – W: 6 to 20 C, another sunny day
The City Council’s rulers acted quickly to dispel the rumours about the Athenée pupils (← 1 May). It may well be that these were not boys from the Athenée, as there were other schools nearby, they said. And apart from that, nobody has complained to the préfet des études of the Athenée. They added that “many men who nowadays make the glory of our country, had their education at the Athenée of Brussels.” It was thus important to keep its reputation clean.
The Journal de Bruxelles reported that negotiations had started between Belgium and the United Kingdom about a postal convention, meant surely to send mail between the two countries easier.

3 May, Tuesday – W: 7 to 16 C, a sunny day
The first indication of a drought comes from Valenciennes, in France, just over the border with Belgium. L’Indépendant quotes from the Echo de la Frontière: “The continuation of the drought, in a season when rain is so necessary, is beginning to occasion serious questions for the farmers here.” M. Heger would by now indeed have been quite busy with watering his garden plants.
L’Indépendant also wrote that “despite the beautiful weather which prompted many people to go out walking, and despite the many concerts that have been given this year, the musical ‘soiree’ given by M. Baldeneeker [a young pianist] attracted a large crowd.”

4 May, Wednesday – W: 7 to 16 C, clouded, with a little bit of rain at the end of the morning
On this day M. Heger gave back to Charlotte her devoir Le Nid (← 30 April), with his comments, the British Queen left Antwerp for its first voyage to New York (← 20 March), and the Belgian king and queen came back from Paris, from one of their many travels abroad.
Belgium saw a few cases where the extent of the matter of freedom of speech was tested. The Journal de Bruxelles on this day wrote that two book printers had been arrested, after the newspaper had filed a complaint against them for suggesting the Journal endorsed a certain novel. In fact, it was Auguste Luchet’s Nom de famille, a novel that went against all the religious and moral principles of the newspaper. In France Luchet was convicted to two years in prison for this book. The Journal regularly raged against it. Eventually though the printers were not brought to face trial.

5 May, Thursday – W: 6 to 17 C, fairly clouded
On this day the first of a series of concerts was given at the Jardin Botanique, performed by the orchestra of the Société Philharmonique, on all Thursdays until well into the autumn. The concerts began at 18.30 hrs.
A devastating city-wide fire began in Hamburg. It would rage for three days, aided by strong winds, and the drought. It would take until 11 May before the first reports were published in the Brussels newspapers. 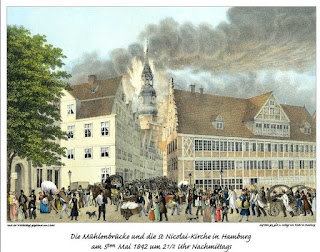 Before she spoke to the Brussels Brontë Group on April 21, Lucasta Miller visited the Cathédrale Saint-Michel et Sainte-Gudule. It was her first trip to Belgium and she wanted to see where Charlotte Brontë made her dramatic confession to a Catholic priest during the distraught summer of 1843 – an incident she related to her sister Emily in a letter and later fictionalized in her last novel, Villette.*

Legend has it that Charlotte used the second confessional on the left, though we don’t know for sure. Lucasta reported that the confessionals are ``quite intimidating -- huge, dark wood carved with vast angels,’’ adding that she ``almost felt anarchic enough’’ to move the security rope and go inside. ``But I didn’t quite dare. I don’t know – if I was Emily, maybe I might have done,’’ she said.

Professor John Sutherland came to the Brontës early in life, but not in what you might call the usual way. He may be the only person to have started his Brontë experience with The Professor – the book Charlotte referred to as her ``idiot child’’ and the one most people probably read last, if at all.

As Sutherland explained in his talk on April 21 to the Brussels Bronte Group, the novel struck a chord with him when he first read it as a pre-teen, particularly a scene early on before the protagonist, William Crimsworth, heads to Brussels. The volume included six illustrations by Edmund Dulac, and one was of this scene in Chapter II:

At a distance of five miles, a valley, opening between the low hills, held in its cups the great town of X----. A dense, permanent vapour brooded over this locality -- there lay Edward’s “Concern.”

I forced my eye to scrutinize this prospect, I forced my mind to dwell on it for a time, and when I found that it communicated no pleasurable emotion to my heart -- that it stirred in me none of the hopes a man ought to feel, when he sees laid before him the scene of his life’s career -- I said to myself, “William, you are a rebel against circumstances; you are a fool, and know not what you want; you have chosen trade …”