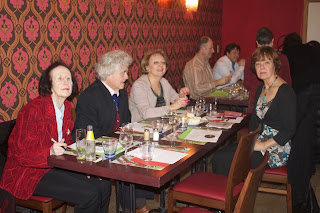 It was translated by long-standing Brussels Brontë Group members Myriam Campinaire and Daniel Mangano and published by CFC-Éditions, who run the Quartiers Latins bookshop.


This publisher’s catalogue contains lovingly-produced, richly-illustrated books about Brussels. ‘Les Soeurs Brontë à Bruxelles’, an illustrated guide to Charlotte and Emily’s time in the city, forms part of the collection ‘La Ville Écrite’; in the same collection is ‘Les Écrivains dans la Ville’, a guide to the literary plaques and statues in the city.

Helen MacEwan introduced the book in conversation with Frédérique Bianchi, who specialises in nineteenth-century literature and organises literary walks in Brussels, and Claire Billen, a retired ULB lecturer specialising in the history of Brussels.


‘The Brontës in Brussels’ is the first book dedicated exclusively to Charlotte and Emily Brontë’s time in Brussels. The French translation introduces readers to a little-known literary connection of Brussels and also to a historical period in the city (the 1840s, shortly after the Belgian Revolution) less thoroughly chronicled than the later 19th century, which saw its expansion and transformation under Leopold II. Numerous additional images have been included in this lavishly-illustrated French edition.

It is always a pleasure to spend time in Quartiers Latins, a marvellous place a little off the beaten track and located in one of the most beautiful squares of Brussels. The genuine love of books that motivates the publishers and booksellers who work in this tranquil spot is almost palpable in the air.


‘Winifred Gérin: Biographer of the Brontës’ 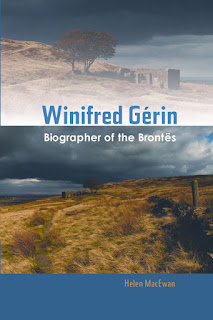 On 29 November 2015, Waterstones Brussels hosted the launch of a book about a Brontë biographer with Belgian links.

Winifred Gérin, who moved to Haworth in the 1950s to research her biographies of the four Brontë siblings, was the best-known Brontë biographer after Mrs Gaskell and before the historian Juliet Barker became the definitive chronicler of the family in the 1990s. Helen MacEwan’s life of Gérin draws on her unpublished memoir and on hundreds of letters to the family of her first husband, a Belgian cellist called Eugène Gérin. Helen met members of the family when researching the book, one of whom (a great-nephew of Eugène Gérin) attended the launch.

Winifred Gérin’s colourful life took her to Paris, where she lived with her musician husband in the 1930s; to Brussels, where the couple were living at the time of the German invasion in May 1940; and to southern France where they found themselves trapped for the first two years of the War and became involved in helping Jews to escape arrest under the Vichy government. Having escaped back to England themselves, they worked for Political Intelligence near Bletchley Park.

Eugène Gérin died in 1945. Ten years after his death, Winifred’s life changed direction after a first visit to Haworth on which she met her second husband, a Brontë enthusiast. Once her Brontë biographies were completed she went on to write lives of other nineteenth-century women writers including Elizabeth Gaskell and Anne Thackeray Ritchie.


Around 30 members of the Brussels Brontë Group attended the launch and heard the story of the research for the book that uncovered the story of Gérin’s hitherto unknown life.

Previously, on 21 November, a launch was organised at Waterstones Piccadilly, London. It was attended by the publisher of the book, members of the Brontë and Gaskell Societies and people who helped with research.

‘Winifred Gérin: Biographer of the Brontës’ is available in Waterstones Brussels. Read about the book here: