Brontës in Brussels: Jolien Janzing talks about the novel she’s writing on Charlotte and Emily’s stay in the city 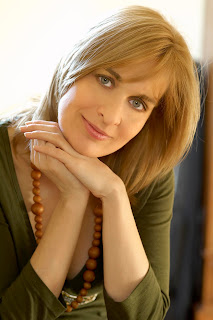 The flow of fictional biographies about the Brontës appearing on the market is never-ceasing; in the last year or two we have had Syrie James’ The Secret Diaries of Charlotte Brontë and Jude Morgan’s The Taste of Sorrow, to name but two of many. What is unusual about Jolien Janzing’s new novel is that it will concentrate on Charlotte and Emily Brontë’s stay in Brussels and will be written by a writer who lives in Belgium; she is Dutch by birth but was brought up in the Ghent area, where she still lives.

Jolien’s first novel, Grammar of an Obsession, was well received. She knew that she wanted her second to be a historical novel about a real person, but searched for some time for a subject before hitting on the Brontës when she discovered that they had lived in Brussels. She had not realised this despite having read Villette as a teenager, and she knows that the Brontës' link with Brussels will be new for many of her readers too.

Her Dutch publisher liked the idea of a novel set in Brussels, a city that appeals to readers in the Netherlands. In it Jolien will explore the history, everyday life, and politics of the city and how all these might have influenced the Brontës. And the other reason why it is the perfect subject for her is that she has loved and admired the Brontës since her mother introduced her to Jane Eyre when she was 12.

Like so many girls before her, Jolien at once identified with Jane, who at the start of the book is about the same age as Jolien when she first read it. She felt the same emotions as Jane, in imagination grew up with her. Her sense of identification with Charlotte Brontë has continued in adulthood. Although, as can be seen from a glance at her photo, in physical appearance she has little in common with Charlotte and her “plain”, physically “insignificant” and “invisible” heroines, she claims that as a Dutch person growing up in Belgium she shared Charlotte’s sense of being an outsider. She also shares her drive and ambition, the wish to prove herself through writing. She says that one reason she feels this need to prove herself as a writer is that Dutch and Flemish women writers have to work hard to be taken as seriously as male authors and carry off few of the literary prizes.

Inevitably, the subject of Charlotte’s attitude to the Flemish comes up in the course of our conversation. Although Charlotte’s prejudices don’t diminish Jolien’s admiration of her as a person and writer, she addresses these attitudes in her novel. She points out that, living with the French-speaking Hegers, Charlotte would have had little real contact with the Flemish speakers and that although Dutch was the language spoken by the majority of the city’s inhabitants, French was the language of the upper and middle classes, of the upwardly mobile.

Apart from her interest in the Brontës – she feels closest to Charlotte but finds Emily fascinating – Jolien is naturally interested in exploring the character of Constantin Heger too. Her own experience as the daughter of a Catholic father and Protestant mother, brought up as a Protestant in a Catholic country (at school she was given religious instruction apart from the rest of her classmates, rather as Charlotte and Emily were excused from religious observances at the Pensionnat) gives her insights into differences between the two religions that may explain some aspects of Heger’s personality and behaviour. In Jolien’s view, the flirtatious element in Heger’s teaching style, while never overstepping certain limits, reflected a more relaxed attitude typical of a Catholic culture that would have been novel to Charlotte, reared in a Protestantism that was stricter about such matters.

One element not found before in a novel about the Brontës is a sub-plot Jolien is introducing about King Leopold I’s young mistress, Arcadie Claret, by whom he had two children. Arcadie was the mistress of a married man; Charlotte had intense feelings about a married man. Arcadie appeared to be a woman who had everything while Charlotte was deeply unsatisfied with her own life. We will have to wait for Jolien’s novel to find out all the parallels and contrasts she draws between the two.

The novel is being part funded by a scholarship from the Flemish Fund for Literature (Vlaams Fonds voor de Letteren), and is likely to be published in 2011 / early 2012.

Helen MacEwan
Posted by Helen at Friday, January 14, 2011 No comments: