Meeting of Dutch members of the Brussels Brontë Group in Rotterdam 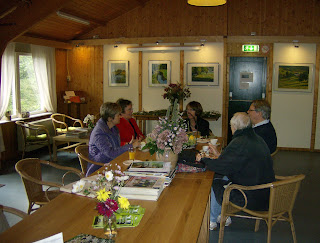 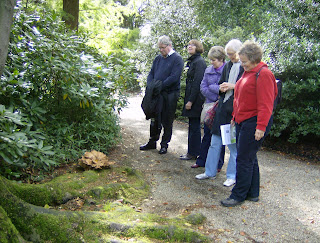 On Saturday 25th of September the Dutch Branch of the Brussels Brontë Group met in Rotterdam. From one of our earlier meetings we learned that we not only share our love for the Brontë-sisters, but that we also like to dwell between plants, shrubs and trees. So we met in the Trompenburg Gardens and Arboretum in Kralingen, since 1895 a part of Rotterdam.

The history of these gardens started in 1825 as part of a house in the country. Most of these country houses disappeared in the 19th and 20th centuries because of the ever-increasing need for houses for the common people of Rotterdam, but Trompenburg survived and its garden became a real park. For the greater part of its history Trompenburg belonged to the Van Hoey Smith family, but since 1958 it is a foundation and the park is open to the public. No ‘allée defendue’ here as in the Pensionnat, though there are beautiful hidden places, where in summertime you can sit quietly and read a book.

In one of the newly required parts of the arboretum there is a tea-house, a good place to renew our acquaintance and talk Brontë. In the afternoon we were lucky that during our walk it was dry and sunny, so we could really enjoy this greenest part of Rotterdam.

Our next chapter was Hoofdtuk II (Chapter Two), a grand café and restaurant decorated with books and serving good food and a nice environment to talk Brontë again.

We hope to continue meeting and talking Brontë in future gatherings in the Netherlands and we look forward to see you all in October in Brussels. 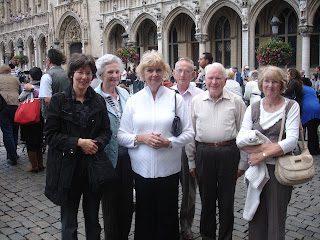 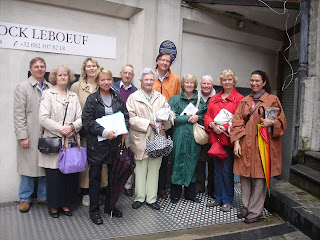 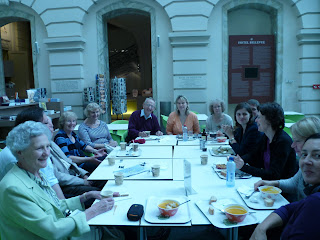 Northern Irish visitors with Helen MacEwan in Grand Place; in front of the "unofficial" Brontë plaque in rue Terarken with guide Myriam Campinaire and other Brussels enthusiasts; having a drink after the walk

Six members of the Northern Irish branch of the Brontë Society, led by Robert Logan and Margaret Livingston, visited Brussels over the weekend of 11-12 September and met members of our group on a guided walk arranged to coincide with their visit. During it they had a taste of Brussels weather as it poured with rain for the first hour, but it cleared up enough to take a photo on the cobblestones of rue Terarken, where we took them to get a feel of Brussels in the 1840s.

The Irish visitors had interesting stories of the activities organised by their own branch, including a 10-day trip to Sicily where they were invited by an Italian envoy to Ireland keen to promote his region and specifically the Bronte town and area in Sicily which is believed to be the inspiration for the surname. For those not familiar with the story, Nelson was made Duke of Bronte by the King of Sicily in return for military services. Since Nelson was a hero of Patrick Brontë, who was born Patrick Brunty or Prunty in County Down, Northern Ireland, when Patrick went to England to study and registered at Cambridge University he decided to change his name to the grander-sounding Brontë. That at any rate is one theory as to why he changed the spelling.

The manor house on the Bronte estate is now used as a conference centre. But as far as I know no Brontë literary conference has ever been held there. An idea for the future?!

(Another idea: a visit of Brussels members to Sicily, following in the footsteps of the Northern Irish branch?)

Patrick was one of 10 children and there are numerous Brontës today in Northern Ireland. One of the Irish visitors, a teacher, told us that at one point she had an Emily Brontë and an Anne Brontë in her class – curiously, though, the original pronounciation of “Prunty” has been retained!

It would certainly be interesting to visit the beautiful Brontë Country in Northern Ireland. The Brontë Society has organised trips there in the past and we hope there will be another one in the not too distant future. In the meantime we can dream about a visit to Sicily!

Helen MacEwan
Posted by Helen at Sunday, September 12, 2010 No comments: