Villette and The Professor in China


Worldcat has an edition of ‘192?’, but this is certainly a mistake. The 1933 work refers to the first edition of 1932 (or rather the 21st year of the new Chinese empire timetable).

The translation got a third edition in 1971, in Taiwan. It has already been described in an article of May 2016. Later I also explained that the title translates as ‘Miss Luo Snow’s study tour in the mind.’

We are happy to read that the Brontës have ended up on a list of top 10 tips what to do in Brussels. There is also a reference to our guided tours. Here is what they say.

Discover old Brussels, Brontë style
Charlotte Brontë was famously rude about Belgium, after living in Brussels for a couple of years from 1842. But don’t let that put you off the Brussels Brontë society’s fascinating walking tours, which offer a window into a vanished world. In a couple of hours you can unlock a few secrets, from a hidden bust of Peter the Great, which marks the spot where the drunken tsar fell off a fountain, to the long-demolished boarding school where Charlotte lived, worked and dreamed up novels. Check online for dates. Tours (around €10pp) may be possible for groups of 10 or more.  •

For more tips what to do and see in Brussels have a look at the Guardian's article. 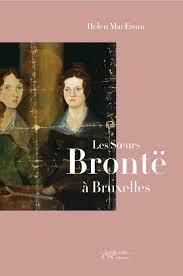 On Sunday 12 March Helen will be signing her book Les Soeurs Brontë à Bruxelles, published by CFC-Éditions. It takes place at the bookfair in Tours et Taxi.

Let any francophone friends know who might be interested, and if you’re at the fair that afternoon, do go and say hello to Helen!

Villette and The Professor in Japan

There have been six editions of Villette and The Professor in Japanese, three of each. They were all published in a ‘complete works of the Brontës’ series. The first Villette was published in 1952, by David-sha which also published the first The Professor in 1954. Both were translations done by Jiro Sagara. In 1951 he also did Shirley. The Villette consisted of three volumes, of 232, 278 and 208 pages. Its Japanese subtitle, apart from a Villette transcription, was ‘A Note of a Solitary Soul.’ The Professor had 199 pages.