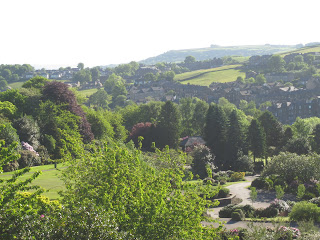 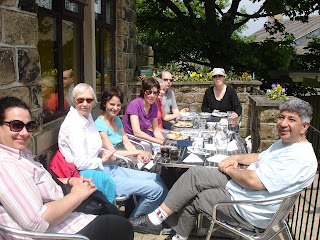 This was my first time in Haworth. Already an avid fan of the Brontë literature, I was looking forward to finally walking in the place where the three sisters lived and wrote. The Brontë Society had prepared an excellent programme to highlight all that which makes the Brontës eternally interesting - their style that has inspired so many other authors of their time, but also continues to inspire authors of the present.

The choice of lectures combined all the domains the sisters engaged in, and I was pleasantly surprised that they exceeded my expectations, with all these new details to further feed my interest in them. The programme was also accentuated by the restoration of the Brontë piano, and the pleasure of an evening of music "out of this world". The notion of such an old instrument, that gave so much pleasure to the Brontës, finally being able to play music transcending all generations into the future - what an experience! The trips organised in the area also provided an insight into the region and an appreciation for the history of people and places that have formed the world we live in.

And then, there were the moors of course... Such indescribable beauty that, despite all the travels I've made, left me speechless. That vast area of all the shades of green, the absolute silence for enjoyment and reflection... This is a sight I fully recommend to all those who have not yet travelled to Haworth.

The most important aspect of this trip, however, were the people I met: the other members of the group, who embraced me in this first journey to the history of the Brontës and of Haworth and who, with their addictive interest and knowledge of the subjects, wooed me into wanting to learn more myself! Their kindness and this exchange of information and experience brings out the best in people, and has made me immerse myself into learning more and enjoy this interaction!

A truly wonderful experience all in all, to be repeated! 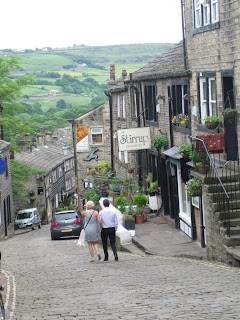 This year 7 members from Belgium and 3 from the Netherlands travelled to Haworth to attend the annual Brontë ("AGM") weekend. For some of the Brussels members it was their first visit to Haworth. The Brontë Society had prepared the usual interesting mix of events: a concert, talks, interviews with writers and with an artist, a graphologist talking about the Brontës' handwriting, a book auction, an evening of entertainment by members, guided walks and a full-day excursion.

Apart from the Brontë Society programme, for those with any spare time or energy there were other things going on in the village "on the fringes" of the AGM. Some Brussels members rode on the Worth Valley steam railway and saw the station used in the film The Railway Children. Others stayed up until 3 a.m. on Sunday to go on a ghost hunt organised by the Black Bull, Branwell Brontë's local, which of course boasts at least one haunted room and still houses Branwell's Chair. Bleary-eyed members who attended told us next day about this "psychic event" which included a séance using the chair and a visit to the churchyard in the small hours.

The weekend started on Friday afternoon with a interview with the artist Victoria Brookland about her exhibition of paintings inspired by dresses in the Brontë Parsonage Museum collection.

The evening event was a magical occasion: the opportunity to hear a concert using Emily's tall "cabinet" piano, restored thanks to a donation from an American member, the first time it has been heard since the Brontës' times. Emily was a keen player, and of course studied the piano here in Brussels as well as teaching it to young pupils at the Pensionnat Heger. The restored piano is now back in Patrick's study and as it was a fine evening we could listen either in the Parsonage (in the hall or sitting on the stairs) or in the front garden at the top of the village, adjoining the churchyard, with the moors beyond. 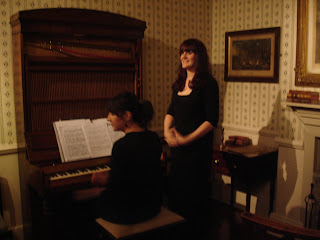 Concert in the Parsonage with Emily's piano

Saturday, a day of brilliant sunshine, started with an interview with the children's writer Robert Swindells about his novel Follow a Shadow, in which a teenage boy's Water Mitty-like fantasy life involves Branwell Brontë and we see the Parsonage through his eyes on a school visit to Haworth. This was followed by Lyndall Gordon, author of the biography of Charlotte Brontë A Passionate Life, speaking of the Brontës' influence on Emily Dickinson, once described as "a kind of left-over Brontë". Many parallels came to light apart from the obvious autobiographical ones (strong father figure, closeness to siblings, importance of home and homesickness when away).

In the afternoon we had an auction of books left to the Society by a member, a garden tea party and the AGM itself, and in the evening we listened to Lucasta Miller, author of The Brontë Myth, talking to the American feminist literary critic Elaine Showalter, author of A Literature of their Own, which Lucasta told us she read in a single night as a student when she was supposed to be studying Milton! Elaine told us about the reactions to the Brontës of American 19th century readers who, unlike their British counterparts, did not find them shocking or "coarse". They took Jane Eyre to their hearts at once, appreciating in particular her egalitarian words to Rochester ("Equal, as we are"). 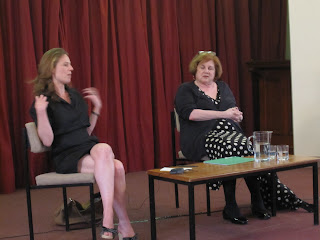 On Sunday morning we could choose between a walk over the moors to the "Brontë falls", or around Haworth with a local historian, both in the rain! In the afternoon we were introduced to the art of graphology by Diane Simpson, who got us analysing our own handwriting and that of various famous personalities, including Lord Nelson, who signed himself "Nelson and Brontë" (Brontë being one of his titles, which is what is thought to have inspired Patrick Brunty to change his name) before moving on to the four Brontë siblings. This was followed by a service in Haworth church where Patrick preached for so many years. A church service of remembrance and celebration of the Brontë family is always held over the weekend with an address or lecture on a Brontë theme. 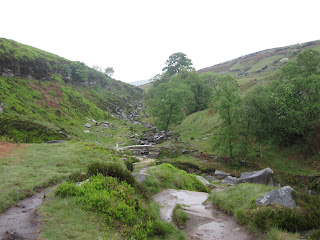 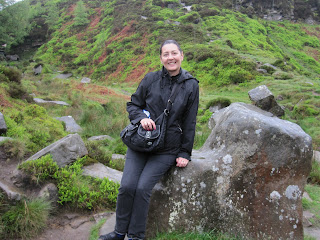 To round off the day we had a meal in the Old White Lion with entertainment (poems, songs, readings and a comedy sketch) provided by members.

Monday was as always taken up with a full-day excursion and this year's was to places associated with Branwell and Emily Brontë's periods of employment in the Halifax area. These periods ended of course in their return to the Parsonage, driven home again by homesickness in Emily's case and in Branwell's by his losing his job as a railway clerk. We visited the lovely town of Luddenden where he stayed when working at stations on the new railway, and stopped at Law Hill House where Emily worked briefly as a teacher. We also visited places nearby that she would have known: the site of High Sunderland Hall which may have inspired Wuthering Heights, and Shibden Hall, whose unconventional owner Anne Lister had been the subject of a BBC series the previous week. 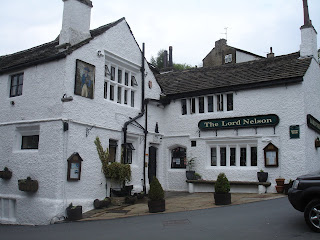 The Lord Nelson in Luddenden, frequented by Branwell Brontë when he was working as a clerk on the Leeds and Manchester Railway. 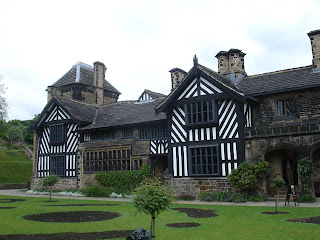 On Tuesday morning it was time to pack up and take leave of our favourite haunts in and around the village – the moor walks, bookshops, favourite pub or tea room, and of course the Parsonage Museum itself. For many this annual pilgrimage has long been a fixture in their calendar, and I'm sure that some of this year's first-time visitors will be returning too. 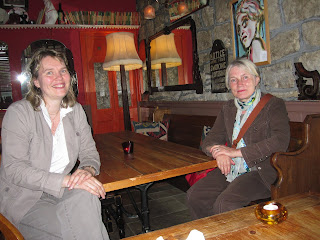 Eva Stönner and Gunilla Westman, two of the first-time visitors to Haworth from Brussels

Helen MacEwan
Posted by Helen at Monday, June 14, 2010 No comments: