The biennial Brontë Society Conference was held from August 26 to August 28 at Homerton College Conference Centre, Cambridge. The theme was ‘The Brontës and the Bible: Influences both Literary and Religious’ – an appropriate subject as this year marks the 400th anniversary of the publication of the King James Bible.

The venue was very attractive with wonderful flower beds bordering the huge lawns. We were staying in halls of residence on the campus. There were about a hundred delegates and the Brussels Brontë Group was represented by Helen MacEwan, Marcia Zaaijer, Brigitte Merle and myself.

As always many of the speakers were very eminent and established Brontë scholars: Christine Alexander, Patsy Stoneman, Marianne Thormählen and Tom Winnifrith (unfortunately Brian Wilks was unable to be present but his paper was read by someone else). In addition there were, among others, a heartening number of up and coming younger Brontë scholars who made valuable contributions which bodes well for the long term future of Brontë studies.

The theme of the conference offered a lot of scope, for of course the Brontë family were steeped in the Bible. Yet in spite of all the work that has already been done in this field, there are still aspects to be brought to light. So it was quite rewarding to listen to people who were actually, in some cases, theologians themselves who looked at the Brontë works primarily from the biblical viewpoint and manner of exegesis. It made us realise all the more how their work is permeated by biblical allusion, not just the odd phrase but the whole structure more often than not is centred round their religious beliefs (orthodox or unorthodox). For instance, Patsy Stoneman’s paper showed how closely Charlotte Brontë’s sentence structure echoes that of the bible. Her stylistic insights were triggered by the linguist David Chrystal’s recent study: Begat: The King James Bible. Another speaker, Emma Miller, dealt with the more figurative aspects, namely biblical and devotional colour symbolism as it related to colour symbolism in the Brontë novels.

Of particular interest to me was Leonora Obed’s paper on Emily Brontë’s Wuthering Heights in which she compared Emily’s notion of nature to ancient Celtic myth where the natural world has its own soul, a kind of super -- naturalness or immanence within it. This, presumably, is the place which the lovers Heathcliff and Catherine will eventually wish to inhabit. To describe it Leonara Obed used the notion of ‘inscape’ developed by the later poet and Jesuit priest Gerard Manley Hopkins. I thought this an excellent and original insight.

In addition to the scholarly talks, on two evenings we were entertained on a lighter note. On Friday, Donald Burrows, renowned expert on George Friedrich Handel, talked to us about the organ in Haworth church, for which Patrick Brontë had raised the funds, and the supposed performances there of Handel’s Messiah of which no tangible trace remains. So Donald Burrows had to hazard guesses as to how it had probably sounded. He did this by means of playing the piano and recordings of very old versions of excerpts from the Messiah. It was a really informative and amusing evening.

On Saturday there was the conference dinner in the sumptuous Great Hall of Homerton College and a great occasion it was. The after-dinner speaker was Patrick Wildgust, curator of Shandy Hall in North Yorkshire. This is a museum dedicated to the author Laurence Sterne (1713-1768) who lived in the house in the 1760’s, and wrote most of his novel The Life and Opinions of Tristram Shandy there. The speech turned out to be a sermon on how (not) to deliver a sermon, with extracts from various sermons and pseudo sermons ranging over some 350 years, including ones by Laurence Sterne, Patrick Brontë, James Joyce and Richmal Crompton (Just William)!

The conference ended after lunch on Sunday. It had been an intensive, worthwhile and memorable experience, thanks to the indefatigable Sarah Fermi and her dedicated team who organised it. I now look forward to savouring the talks on paper when they appear as a special publication of the journal Brontë Studies. 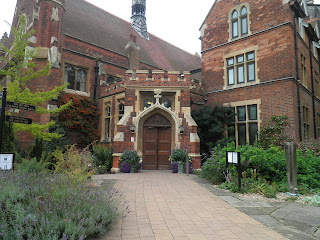 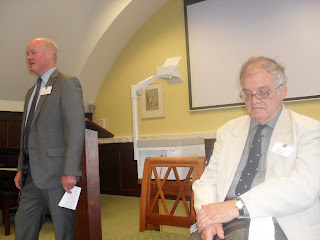 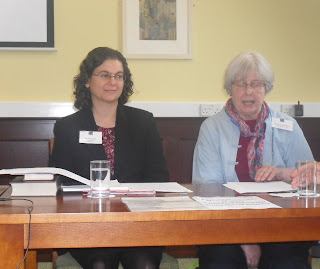 Posted by Helen at Thursday, September 08, 2011 No comments: