Dutch branch of the Brussels Brontë Group meeting in Dordrecht

On Sunday July 12th 2015 the Dutch branch of the Brussels Brontë Group had a meeting in Dordrecht, in the seventeenth century one of the most important cities of the fledgling Dutch Republic of the United Netherlands, and still a fine place to visit when you are interested in art and history. We Dutch Brontë-fans are a small branch, but most of us have been life-members of the Brontë Society for years and years, so you can say we are die-hards. We spent part of our meeting in Villa Augustus remembering nice trips and good talks on the Brontës.  Jones Hayden, who had joined us from the Brussels Brontë Group, could pick up some history here.

Villa Augustus is a restaurant, hotel and garden  at the site and in the buildings of the former water-purification-plant of Dordrecht and most of the surrounding province. Don’t worry, drinking water is still purified in Holland, but on another site with more modern equipment. 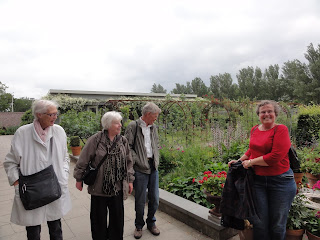 The rest of the afternoon was spent in the Dordrecht Museum at the exhibition ‘Holland op z’n mooist’ (Holland at its best). There were paintings of Dutch painters like Jozef Israëls and Willem Roelofs, and later Weissenbruch,  who were influenced by the Romantic period, specially by the School of Barbizon in France.  They were very modern in painting outside, not in studios. I like to think that the Brontë’s would have enjoyed that.

Well. we did enjoy our meeting and hope the ones that couldn’t make it this time will join in next time.

Marcia Zaaijer
Posted by Helen at Friday, July 24, 2015 No comments: