In some of the important German national and university libraries you can still  find incorrect Brontë entries up to the present day. In the middle of the 19th century, novels of the Brontë sisters were extremely successful. It was therefore  a great temptation for foreign editors (not only German) to find other  anonymous English novels to translate and print them as a new ”Brontë” book.   I found new interesting information about some Brontë titles in the  old, so-called ”Quartkatalog” belonging to the Bavarian State Library (BSB). They  are linked with the book titles on the respective online pages. It is absolutely  fascinating seeing the old original handwritten book records and knowing that in  those days the authors were researched and compiled with great care.    Quartkatalog’s are handwritten catalogue cards in the format of 22 x 18 cm from  the year of their acquisition, in 1841, to the year of publication in 1952. Books are  here listed alphabetically based on the authors' name. Since the beginning of  2004 they have been scanned as images to ease net research. 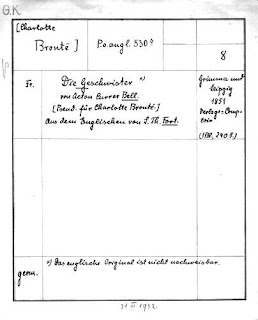 These are the same first lines that in the original title are named “Ernest Vane”.
The author of the English original is well known since years and just now in 2016 this title got a new German edition: 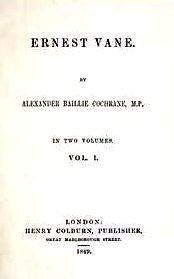