Aspects of the Brussels of the Brontës: The Panoramic View of the City, the Pensionnat and the petites maisons


The problem of the protected panoramic view of the city from Place Belliard, mentioned in a previous article,  surfaced again in 1856, in connection with the renovation plan for the Pensionnat Heger. A key part of it was the incorporation into the building of Rue d’Isabelle 34, 36 and 38, three houses the Hegers had already bought in 1844. Heger, in a letter to the mayor seeking permission, described them as “trois petites maisons.” The first renovation plan was rejected though on the ground that the proposed building got too high, for that panoramic view. The Hegers had to agree to a height of two and a half meters less than the 11,70 m they had wished. That’s one storey.

The 1842 cadastral plan clearly shows this. One can also see that the Pensionnat had a fairly small street front part. A good deal of the building was hidden behind Rue d’Isabelle 34 to 40. In the 1840s, thus, this side of the street was rather different from what it looked like in photographs of later times, such as this one:

This version of the 1842 cadastral plan shows these three buildings, nrs 34, 36 and 38 (indicated by blue dots; the Pensionnat is given in red, with a part of it, a one storey annex. in orange). They were situated at the right side of the Pensionnat’s street façade. On the left side there was a row of 8 of these little houses. Based on this an adapted picture was made, which comes much closer to what the Rue d’Isabelle really looked like in 1842-3.

The Brussels Brontë Group commemorated Emily Brontë's bicentenary on Saturday, Oct. 13, 2018, with a talk on Wuthering Heights by John Bowen, professor of 19th-century literature at the University of York, followed by a celebration of Emily's poetry.

Professor Bowen delved into the strange appeal of Wuthering Heights despite the violence and cruelty in the novel and the public’s enduring fascination with the book more than 150 years after it was first published.

The title of his talk was bleak -- `Dividing the Desolation’, taken from the first paragraph of the novel. But Prof. Bowen showed how that first paragraph highlights the richness of Emily Brontë’s language right from the start. While focusing on the depth of ideas in Lockwood’s declaration that
``Mr. Heathcliff and I are such a suitable pair to divide the desolation between us,'' Professor Bowen also touched on the multiple layers of meaning in phrases like ``solitary neighbor’’ and ``be troubled with.’’

Then we were off on an exploration of the characters in the novel and what they mean to different readers and critics. Along the way, Prof. Bowen touched on the importance of naming in Emily’s novel, Charlotte Brontë’s feelings about Heathcliff, and Heathcliff’s feelings about himself. And throwing in an entertaining rendition of Joseph’s colorful chidings in Yorkshire dialect.

Bowen, who is president of the Dickens Fellowship, also mentioned Charles Dickens’ apparent antipathy to the Brontës. There is only one recorded instance of Dickens talking about the sisters from Haworth, and that is someone’s note about a conversation with the novelist in which Dickens said he never read the Brontës but ``disapproved of the whole school.’’ But reading Bleak House, it's hard to think that Dickens hadn't read Jane Eyre, Prof. Bowen said.

On Wuthering Heights, the question he wanted to ponder was: Who is the main character? And relatedly: what is central to the novel? These may sound like straight-forward questions, and most of us no doubt had our own straight-forward answers. But Prof. Bowen demonstrated the complexity of the queries and how they go a long way to helping understand how readers react to Emily’s book.
Read more »
Posted by Ola at Monday, October 22, 2018 No comments:

1 September, Thursday – Weather: 9 to 19 C, quite clouded, some evening rain, strong wind
On this day an art exhibition was opened in Koekelberg. The aim was to raise money for a new local church. “Les dames directrices,” the Journal de Bruxelles wrote on the fourth, “are Mesdames Goussaert, née Phelps, directress of the English pensionnat” and six other women. Two days later it wrote that the ‘beauty and freshness of most of the works excited the attention of all visitors.’ On the 20th l’Indépendant wrote that ‘many curious people go to Koekelberg each day to see the exhibition.’ It added that there was also a large number of works by women. The Brontë sisters may well have visited this exhibition, together with the Taylor sisters.
Rachel, accompanied by her mother and brother, left Brussels on this day, for Paris. With her 12 performances in the city and one in Gent she had earned more than 30,000 francs, l’Indépendent wrote the next day.

3 September, Saturday – W: 15 to 23 C, clouded morning, bright afternoon
l’Indépendant had four extra pages about the debate in Parliament concerning the city of Brussels which had run into heavy debts. The city wanted to renegotiate the convention with the state of November 1841, which had not worked out well for Brussels. This debate dominated the newspapers around this time.

4 September, Saturday – W: 14 to 23 C, pretty clouded, rainy afternoon
‘They are going to demolish the pump in the rue d’Isabelle in order to construct a new one,’ l’Indépendant wrote. It possibly refers to the water well in the garden of the Pensionnat.

5 September, Sunday – W: 10 to 19 C, quite sunny
More than 5000 people visited the Salon on this day, including the King and Queen. There were also ever more foreigners who came to see the art exhibition. Paintings were still being added to the exhibition.

The Journal de Bruxelles had a Rue d’Isabelle advertisement.

Rue d’Isabelle 3 (at the corner with Rue Terarken) was also the ‘depot’ for the Paris Journal des Economistes (as the Moniteur belge wrote a week earlier). The Brontës obviously knew this bookshop well.
Here’s another ad from them (l’Indépendant, 23 January 1842): 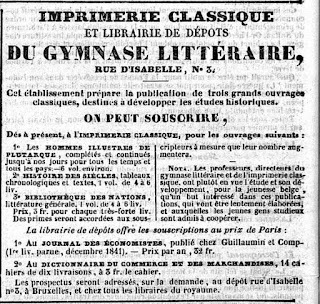