Eric Ruijssenaars, who’s done so much research on the Brontës in Brussels, is spending a year in the USA doing research of a different kind (though he hopes to find time for Brontë investigations too). He has sent this account of his first month there.

On Tuesday April 19th I left the Low Countries to go to the United States. For a year I will be doing research at the New Netherland Institute in Albany, the capital of New York State. It is therefore here that the archives of NYS are housed and thus also the papers of the periodwhen the Dutch ‘owned’ quite a large part of what is now the US (1609-1664, 1673-4). Even after the latter year places like Albany remained overwhelmingly Dutch-speaking for a long time, and up to this day one finds many Dutch names, of places and persons.

It is a great adventure for me of course, and what makes it even better is that I have the opportunity to do Brussels Brontë research here.Many Brontë manuscripts have ended up here in a number of collections all over the country. I hope to find things about the Brontës and their stay in Brussels. It is known many Americans visited the Pensionnat Heger when it was still there, and that Villette was much more popular here than in England.

On Saturday April 23th I had the great pleasure to meet Sue Lonoff again in Manhattan,.after meeting her half a year ago in Brussels where she gave a splendid lecture. It has just been confirmed that she will come to Belgium again in October. In Leuven (Louvain) she will give a talk about the Heger family, at the occasion of the Louise Heger exhibition in the Museum. 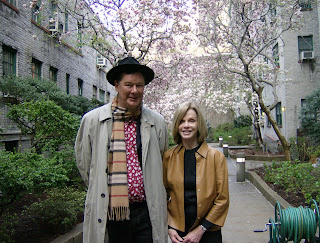 In New York I spent five days. It’s a great city. Had the great pleasure to see four paintings of Johannes Vermeer, my favourite painter, at the Metropolitan Museum, as well as a marvellous collection of Egyptian antiquities and a golden drum given to Ringo Starr in 1964. Earlier I had already visited the place where John Lennon was shot, and close by, Strawberry Fields in the quite wonderful and huge Central Park. I hope to revisit NY regularly, there’s much I haven’t yet seen, nor have I yet been able to do BB research at the New York Public Library.

After spending several days in New York my friends took me to their second house in Old Chatham, which is pretty close to Albany. The house was the village’s Parsonage and still bears that name. 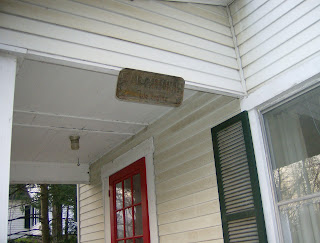 At present Jane Eyre is a big hit in the cinemas in the US. The people I spoke with who saw the movie were all enthusiastic about it. The picture is from a cinema in Albany. 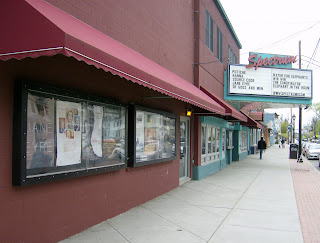 On June 18th I will be giving a lecture in New York to the Brontë Society members of this part of the US. I’m going to do a guided virtual walk through the Quartier Isabelle. It seems like I’m going to do several more lectures this year about my New Netherland research. But there may be more Brontë lectures as well.

In the summer I hope to visit Syracuse (also in NYS), where they have some correspondence between Frederika Macdonald and Marion Spielmann, two of the great early BB historians. The weekend of 6-8 Maysaw the annual Tulip festival in Albany, a sort of Dutch feast, as you can see on the picture. 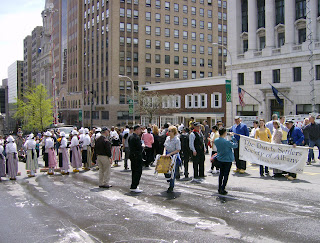