One of the joys of the annual Brontë weekend in Haworth (always held over the first weekend of June), which this year was attended by six Brussels group members, is the encounters with the other members who converge on the village each year. They (we) are a very diverse group of people ranging from academics who have devoted their lives to researching the Brontës to local people who grew up with them, so to speak, and have an encyclopaedic knowledge of the family and of local lore. Some even have family links with Brontë connections, like the lady who has inherited a scrapbook of Ellen Nussey's containing newspaper cuttings about Ellen's beloved friend Charlotte Brontë.

Then there are the claims made by some enthusiasts. There's the lady who claims to be a descendant of an illegitimate child of Branwell Brontë. Or the one who took a photo of the Parsonage and believes that a shadowy outline in the doorway is the ghost of Charlotte.

Of course the Brontës were keen on the supernatural so it is perhaps natural that ghosts should come up sometimes in the tales that are swapped over pints and generous helpings of Yorkshire pudding in the pub after the day's events. Have you heard the story about the London taxi-driver who saw Charlotte's ghost sitting in his cab? Derek Blyth told this one to the Brussels group during his recent talk about Charlotte's letters to Monsieur Heger. 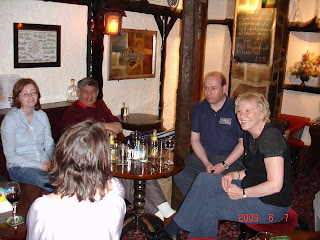 In the Old White Lion

Enjoyable as these stories are, however, few Brontë Society members claim to see ghosts or dabble in any way in the supernatural! True, most of us have our passions and enthusiasms. Such as adding to our libraries of Brontë-related books. The Brontës must be the most written-about literary family in the world and we always live in hopes of picking up first editions or rare biographies in the many second-hand bookshops in Main Street.

The Brontës have always attracted creative people. In the pub I talked to the Italian cellist Paolo Mencarelli who belongs to a chamber music called the Gondal Trio and is interested in the similarities between Emily's writings and Beethoven's music, and jazz singer Val Wiseman who's brought out an album of songs inspired by members of the Brontë family and by characters in their books.

Turning to the scheduled entertainment, one of the highlights was a concert given by Veronica Metz, who recently performed for the Brussels group, of her Celtic settings of Emily Brontë's poems. 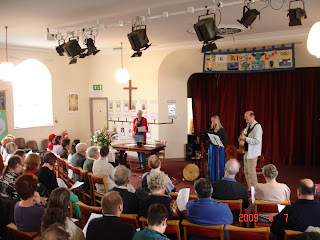 Another was the panel discussion with novelists Joanne Harris (author of Chocolat), Jude Morgan, Amanda Craig, and Kate Walker who writes for Mills & Boon, on the influence of the Brontës on their work. Look out for Jude Morgan's The Taste of Sorrow, a fictionalised biography of the Brontës, which has just come out.

Interesting insights were provided during the discussion both by the writers and by members of the audience. For example, Patsy Stoneman said one gets the feeling from their novels that the Brontës somehow wanted to be women and Romantic heroes at the same time.

We also had talks by Juliet Barker, THE Brontë biographer, who started her career working in the Parsonage Museum. She refutes many of the "myths" about both Haworth and the Brontës perpetrated by Mrs Gaskell in her Life of Charlotte Brontë, and spoke to us about the motives that led Gaskell to deliberately distort some of the facts. But despite its inaccuracies, the Life is still a wonderful introduction to the Brontës. Our Brontë weekend in Brussels in 2010, the bicentenary of Mrs Gaskell's birth, will focus on her and we'll be exploring the ways in which she researched the material for her biography.

The revised edition of Juliet Barker's own Brontë biography is about to come out and she told us that some new facts have come to light, for example fresh evidence discrediting the story that Branwell went to London to study art at the Royal Academy and returned penniless having failed in the attempt and spent his money on drink. 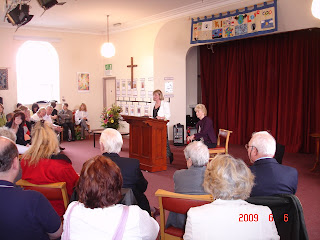 The Society's annual general meeting, which all members can attend, always takes place over the weekend, with committee members reporting on developments in the past year. Financially, the Society relies heavily on revenue from visitors to the Parsonage Museum, and this year has seen an exciting revamp of the exhibition area. Every year there is an extensive arts programme. The Museum promotes works by contemporary writers and artists inspired by the Brontës and offers a wide range of educational activities.

As always, there was a guided walk and happily the weather, which for the first part of the weekend was much more conducive to ghost stories round the fire than to walking, cleared up in time for our tramp over the Moors.

Next year's Brontë weekend in Haworth will be from Friday 4 June to Monday 7 June 2010. The main events are from Friday to Sunday, with an all-day excursion on Monday for those wishing to prolong the weekend.

Hope to see some of you there!

Helen MacEwan
Posted by Helen at Saturday, June 13, 2009 No comments: