As we continue to celebrate the Brontë bicentenaries (2016-20), I’d like to invite you to the launch of my new book Through Belgian Eyes: Charlotte Brontë’s Troubled Brussels Legacy, which is being published next month (Information here):

Those of you who were at my talks on 1 April and 14 October have had a preview of some of the aspects explored in the book. It does two things. It is the first book to look at how Belgian commentators have responded to Charlotte Brontë’s depiction of Brussels and Belgian life in Villette and The Professor. Their reactions cover a wide range: hostile, humorous, enthusiastic. At the same time, to provide context for Belgian readers’ reactions, the book fills in the background to the novels by exploring the Brussels world that Charlotte experienced in 1842-43. Her views are contrasted with those of other foreign visitors and of the Belgians themselves. 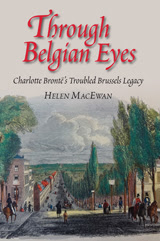 The book offers a new way of reading Villette and The Professor as well as new perspectives on Charlotte Brontë.

I also look at ways in which the Brontës’ stay in Brussels has entered the literary mythology of Brussels and fired imaginations. Did you know that in the nineteenth century there were tales of sightings of Charlotte’s ghost in the Belgian capital? Or that all three Brontë sisters lived in a house in Grand Place in 1852 – at least according to some guide books!

The book has around 60 illustrations, some in colour. Those who were at my talk earlier this month saw a sample of them.

Below are comments by some Brontë scholars who have read the book.

I hope you will be able to join me on 7 December in Waterstones for a glass of wine and a signed copy of the book! It’s also an opportunity to support Waterstones, who organise so many such events.

Helen MacEwan’s acknowledged expertise on both the place and the author comes together perfectly in this packed and fascinating study of Brontë’s mixed feelings about the city that formed her as a writer – and its equally ambivalent responses to her. (Claire Harman)

Helen MacEwan has achieved something very unusual: she has found a fascinating area of Brontë studies untouched by previous writers. By enabling us to read through Belgian eyes, she sheds surprising new light on novels we think we know. (Patsy Stoneman)

Brings together her expert knowledge of the city and the author …. balances Charlotte’s critique of Brussels against the impressive counterweight of her legacy. (Lyndall Gordon)