1 July, Friday – Weather: 18 to 20 to 13 C, clouded, rain around 4 pm, stormy wind
After the heat of June the month of July brought nicer weather: lower temperatures and a welcome amount of rain on a number of days. It started poorly though, with a severe storm.

4 July, Monday – W: 12 to 24 C, clouded morning, quite bright afternoon
The Journal de Bruxelles had news again about Pierre-Jean-Joseph Parent (← 13 June). A second pamphlet he had written in June about the, in his view, show trial of March, was quickly seized by the police, but the text, posted at his house at Rue de la Madeleine 74, drew crowds of interested people. Now he had issued a third pamphlet, which was quickly confiscated again. This time Parent (not related to Zoë Parent) had gone too far, in insulting judges and other high “fonctionnaires public.” Not long afterwards he was sentenced to two years in prison.
The same newspaper wrote about a ‘petition of a great number of noble habitants of the manufacturing districts of the north and northeast of Yorkshire, complaining about the distress of the people.

5 July, Tuesday – W: 17 to 22 to 14 C, pretty clouded, rain between 12 and 2 pm, a fine rainbow visible around 8.15 pm in the southeast
L’Indépendant gave figures for June of travelers from London to Ostend. On 39 journeys 620 people had been brought to Belgium. The number of passengers had sharply increased, due to lower tariffs, caused by the fact that the General Steam Navigation Company now had to compete with a Belgian company sailing between Antwerp and London. More ships had become available, and the average number of passengers per ship had increased by more than 50%.
The newspaper also had an advertisement for a cigar and tea shop. Maybe Heger bought his cigars there, at least sometimes. Twelve days later there was an ad for another cigar shop, at the Rue de l’Infirmerie. There will surely have been more shops where one could buy cigars. 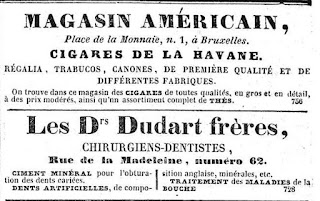 Below it a dentist ad can be  seen. Dentists often advertised. There was one very close to the statue of Belliard too.
Read more »
Posted by Ola at Tuesday, September 11, 2018 No comments:

To kick off this academic year here in Belgium, the writer and academic Kristien Hemmerechts is giving a series of 14 short talks on the Brontës on the Flemish radio station Klara. The talks, which last around 7 minutes, will be broadcast from 3 September on weekdays at 8.15 am. More information can be found here: https://klara.be/thebrontes

As the starting point for each broadcast, Kristien Hemmerechts takes a quotation from one of the Brontës, drawing on their novels, letters (including Charlotte’s letters to Constantin Heger), Emily’s ‘diary papers’ and the French essays written by Charlotte and Emily in Brussels. All four siblings are discussed; one of the talks is dedicated to Branwell.

Look out for the ninth broadcast, which discusses Charlotte’s attitude to Brussels and the Belgians! And in the last of them, the Brussels Brontë Group gets a mention.

Kristien Hemmerechts has written many articles on the Brontës in the Belgian press. In the early days of our Group, she wrote about our activities in an article dated 25 April 2008 for the newspaper De Standaard

Next year, on 6 April 2019, she will be giving a talk to the Brussels Brontë Group called ‘A Belgian reads the Brontës’. She says: ‘At a pivotal time in my life, I spent two years in Britain, mirroring Emily’s and Charlotte’s stay in Brussels. For all their differences I often find herself identifying with them. Their resilience, power and determination have often been a source of inspiration for me. Rereading their work and reading about them for the Klara broadcasts has only added to my enthusiasm and profound admiration. My talk will focus on what the Brontës have meant to me as a writer, a teacher, a feminist and a Belgian.’

For more details of this and our other forthcoming events, see our website: