Whatever the future may hold for the Brussels Brontë Group, 27 October 2012 will always stand out as a high spot in our annals. For us personally it was the day we got the opportunity to take part in a TV programme. More generally, it represented recognition of the role played by Brussels in the Brontë story.

In mid-September I was contacted by Gareth Williams of Blakeway North Productions, a TV production company in Manchester. He was to direct and produce a one-hour documentary on the Brontës, one of a series called Perspectives in which a well-known personality talks about a literary, artistic or musical passion – Andrew Lloyd-Weber on the Pre-Raphaelites, Griff Rhys Jones on The Wind in the Willows. The documentary was to be presented by the actress Sheila Hancock (Sheila is also the widow of John Thaw who played Inspector Morse in the TV detective series).

Gareth Williams explained that the film would be a voyage of discovery for Sheila Hancock as she travelled round the north of England visiting Haworth and other places important in the sisters’ lives, such as Roe Head School, while exploring their story in conversation with Brontë biographers such as Juliet Barker and Lyndall Gordon. The film crew would also head south to London where Sheila would look at the Heger letters in the British Library.

But there was also a location outside England where Gareth wanted to film. He felt that documentaries about the Brontës didn’t always place enough emphasis on the significance of their stay in Belgium. In conversation with me he learned that we organised guided walks around the Brontë places in Brussels. Could he bring Sheila Hancock to Brussels and film her following in the Brontës’ tracks here as she joined a group to listen to one of our guides?

A few weeks later Maire Tracey, the assistant producer for the programme, came to Brussels to reconnoitre. She spent some hours with guides Myriam and Jones and myself going round the walk route. It was a day of brilliant sunshine in early October. The crew were to come out the weekend before Halloween and we warned her that in late October they would be lucky indeed to have a repeat of such weather.

We checked the weather forecast anxiously every day in the week leading up to the 27th. Both the weather that week and the forecast for the weekend were dire. We had been enjoying a brief Indian summer but now temperatures plummeted. Two days before our date with Gareth Williams and his team the forecast was for thunderstorms, heavy rain and temperatures near zero. On the 26th it poured and we were afraid to check the forecast.

Saturday the 27th got off to an uncertain start but quite early in the morning the sun came out – and stayed out. It seemed too good to be true. It was, however, cold. At 1 pm a group of ten of us met the film crew of five (Gareth, Maire, cameraman, sound man and make-up girl) outside the Protestant church in a chill breeze but under a blue sky.

Sheila Hancock, tall and very elegant in her ankle-length coat and scarf, joined our group to listen to Myriam, who seemed unfazed as the camera zoomed in, the sound man held his fluffy microphone high over our heads and the make-up girl occasionally darted forward to spray Sheila’s hair or dab at her face although neither hair nor face seemed at all in need of her attention. Half-way through the walk Sheila was offered some gloves which she refused initially because they would mar ‘continuity’. When the temperature dropped a further degree or two, however, the gloves went on!

The rest of us, with hair unattended to by the make-up girl, enjoyed ourselves despite the cold and soon got used to the presence of the camera. Occasionally there was a re-take, for example when background noise became a problem, one instance being the slamming of car doors when the guests departed after a wedding in the Protestant church. The film crew had been concerned that from the outside it didn’t look like a church, but the emergence of the wedding guests provided suitable cinematic confirmation and they asked Myriam to synchronise the start of her talk with the appearance of the bride and groom.

In Place Royale our great day could have ended in tragedy as we wandered into the centre of the square while the cameraman took shots, regardless of traffic and the fact that at one stage some of us were standing on the tramline!

Myriam started by setting the scene: what brought Charlotte and Emily here all the way from Haworth, why they chose Brussels, how they funded their study trip. At the top of the Belliard steps looking down at the site of the Pensionnat, she took us in imagination into the school and told us how M. Heger’s tuition improved the sisters’ writing style. But as she embarked on Charlotte’s relationship with her teacher, clearly a subject of great interest to Sheila, the director and the future viewers of the programme, the first hailstones fell from a cloud that had been steadily blackening overhead. The weather had turned wuthering, giving us a taste of the Yorkshire moors. We hurried down the stairs seeking shelter, feeling a little like Lucy Snowe fleeing Place Royale, and took refuge in a café opposite Bozar.

Sheila asked questions of the guide and drew the rest of the group into discussion as well. She picked up on various points that interested her, wondering for example whether Emily was as miserable in Brussels as is generally assumed; she obviously enjoyed learning German, and used to study it with a book propped up in the Parsonage kitchen while she made the pastry. Sheila also wanted to know exactly what kind of man M. Heger was, and how Charlotte’s relationship with her teacher was reflected in her novels. She also quizzed us about our take on the Brontë-Heger letters. She had seen them a few days earlier in the British Library; was it known for certain who tore them up, who sewed them together again, and above all, why?

She speculated about the Heger side of the correspondence and whether some letters are waiting to be discovered somewhere, like the manuscript of ‘L'Ingratitude’ that Brian Bracken found last year at the Musée de Mariemont. In her talk to us two weeks earlier Lyndall Gordon had also speculated about Heger's letters to Charlotte being hidden somewhere. Perhaps, like Lucy Snowe, Charlotte had buried them in a jar in the garden.
Sheila hinted at a couple of interesting discoveries made in the course of filming, including one at the British Library while viewing the letters and another at Roe Head. We’ll have to wait for enlightenment until the programme is broadcast.

The sun shining again, we walked to the cathedral. The tour which had begun in bright sunshine in front of the neo-classical building housing the Protestant church ended in sunshine before the Gothic cathedral where Charlotte, despite her anti-Catholic rants, one day persuaded a priest to listen to her confession…. of what exactly? 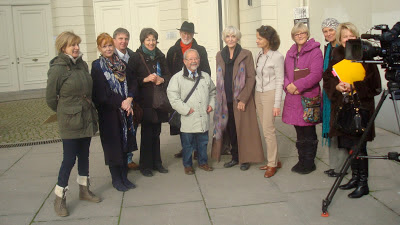 After we had speculated about that for a bit it was time for the crew to rush Sheila off to one of the olde worlde cafés in Grand Place where they’d arranged to film her final musings on the importance of Brussels for the Brontës. With the Hôtel de Ville as a backdrop, she summed up how crucial their time here was to their development as individuals and as artists. We too adjourned to a café, to warm ourselves with mulled wine and talk over our afternoon. We were still talking as the film team caught the Eurostar back to London.

Brussels was the last port of call for the team, and the next six weeks will be spent editing the material amassed. The date the programme will be broadcast is not yet fixed but will be early next year. We’ll watch with interest to see just how red our noses were from the cold, which moments of the tour are saved from the cutting room floor and what conclusions Sheila drew from her time with us following in the Brontës’ footsteps in Brussels.

On 13 October 2012 Dr Lyndall Gordon (St Hilda’s College, Oxford; author of several biographies including of Virginia Woolf and Emily Dickinson) gave a talk called The Hidden Face of Charlotte Brontë in which she explored some of the insights she gained in writing her biography Charlotte Brontë: A Passionate Life.

Lyndall Gordon proved to be as fascinating and engaging as a speaker as she is as a writer. She spoke of the gap between Charlotte’s inner and outer self, the different selves she presented in letters to different friends and the person we find in her journals and novels.

The Brontës resented the fact that as governesses they often seemed to be invisible, yet Charlotte herself presented a demure and ladylike exterior when it suited her – to Mrs Gaskell, for example. Drawing comparisons with other women writers of the period, Lyndall Gordon reflected on the tension and power created in her novels by this gap between her private and public persona.

Dr Gordon has a particular interest in the Brussels period and considers that it was in Brussels that Charlotte became a writer. Heger understood her as a person as well as nurturing her talent. Her fictional heroes were similarly capable of engaging with her heroines’ inner selves.

Brontë had a similar experience with her publisher George Smith. She had subtle and ‘indefinable’ relationships with both men, creating intimacy with them through letters.

Turning lastly to Arthur Bell Nicholls, Dr Gordon said that in marrying him Charlotte chose life over art and that she found happiness in her marriage.

The discussion that followed was very lively and wide-ranging. Lyndall Gordon told us that in a few days’ time she was to be filmed in the British Museum, talking about the Heger letters, for a documentary on the Brontë sisters to be shown as part of ITV’s Perspective series. The crew will then be coming to Brussels to film with our group. During the discussion we took the opportunity to explore some of the questions the documentary will be raising, such as the factors that may have contributed to producing the phenomenon of the Brontë family. We doubted that the programme would find all the answers in the hour allocated to it!

Over the weekend we enjoyed showing Lyndall and her husband around the Brontë sites and pointing out the confessional in the cathedral where, in 1843, a priest may have had a glimpse of that inner self of Charlotte Brontë we were able to explore with Lyndall Gordon. 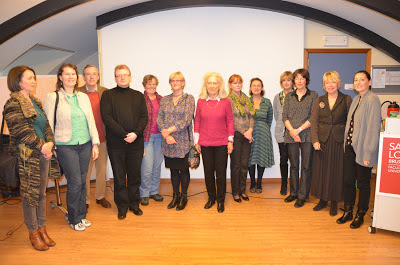