The cobblestones of rue Terarken

Rue Terarken/ Terarkenstraat beside the Palais des Beaux-Arts, off rue Ravenstein, is practically the only surviving stretch of the narrow cobbled streets of the Quartier Isabelle where the Brontës lived in the 1840s. It is very close to the site of Rue Isabelle and the Pensionnat Heger. Most of the Quartier Isabelle disappeared under re-development in the early 20th century.

It was a shock to read, in Selina Busch's report about the Brussels Group events in April, that the original cobblestones of the Rue Terarken had been replaced. They were the ones Charlotte and Emily had walked upon! However much had changed in the Quartier Isabelle, at least they had survived. Until last August, 2009.

If only I could retrieve one of them, I thought, so I wrote to the Palais des Beaux-Arts (BOZAR). As always they were very helpful. They referred me to a lady working at the Brussels Transport Infrastructure Department (Beliris), Priscille Bernard. And she very kindly replied she had managed to save three of the stones! She explained there had been two kinds of stone. These three are probably the kind you can see on the right-hand side of the photograph of the street before it was re-paved. 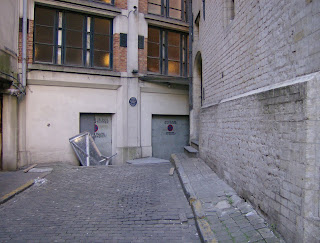 Some weeks ago I went to Brussels to collect them. For me it was quite exciting. To have a cobblestone, like having the Brontë stamp mentioned earlier this year on this blog, would be wonderful for my Brussels Brontë collection. As always, the first thing I did after arriving was to go to Rue Terarken. It was a rather warm sunny day, and it felt great to be in Brussels again, after quite some time. 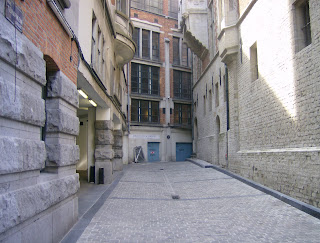 Rue Terarken as it is now

That morning I had my appointment with Priscille Bernard, who you can see in the picture handing over to me the three cobblestones, in the office at the Rue du Gouvernement Provisoire. I would like here to thank Beliris and her very much! They have been incredibly helpful (with what perhaps could be regarded as a bit of a weird request) 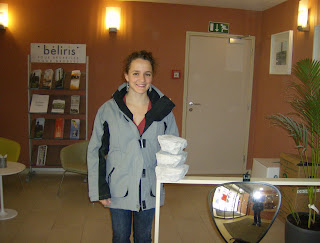 The cobblestones were smaller, or less deep, than I had expected. But when I looked at other roadworks I saw the stones were of the same size. They weigh about 2½ kg each. It is almost beyond imagination that they may well have the footsteps of the Brontë sisters on them. As well as the footsteps of a number of readers of this article.

The two other have ended up or will end up in Kerksken and Tiel.

Marina Saegerman tells me that someone from BOZAR explained that the stones had been replaced because they have to support the weight of the heavy trucks delivering goods for BOZAR in Terarkenstraat.

Eric Ruijssenaars
Posted by Helen at Friday, July 30, 2010 No comments: