Emily Smith, who attended the talks given by Stevie Davies and Philip Riley during our recent Brontë weekend, has provided the following summary of them. 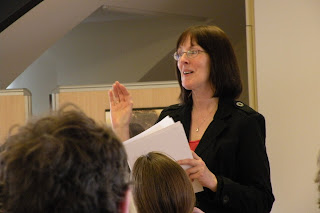 “Earth” is a favourite word for Emily Brontë. Not only, famously, the last word in Wuthering Heights (“...the sleepers in that quiet earth”), it occurs again and again throughout her writings. A speech given at the 2009 Brussels Brontë Weekend, by novelist and critic Stevie Davies, covered a broad and inspirational range of subjects, all centred around the idea of earth. Mother, nature, and home are all strong themes in Emily’s work, and all have earth connotations. Emily seems obsessed by the natural world around her: dismissive of God and often men, as Davies explained, she is rare amongst 19th century writers in treating even the dogs as characters in her novel.

But she is not, as Davies showed, a ‘romantic’ writer when it comes to earth and nature. Nor is she, despite the important central role given to nature in her world, much similar to a modern environmental thinker. Emily does not see a nature as something threatened with destruction by human beings. An essay written by Emily when she lived in Brussels, and quoted by Davies in her speech, states baldly that: “All creation is equally mad. Nature... exists on a principle of destruction.”

Davies compared Emily’s nature to Darwin’s (later) writings, which describe nature as an often beautiful but always destructive whole. “We forget that the birds which are idly singing around us mostly live on insects or seeds, and thus are constantly destroying life.” (On the Origin of Species).

Emily, said Davies, sees the flow of the natural world, rather than a benign universe. Her nature has more in common with Tennyson’s, “Red in tooth and claw” than with a romantic idyll. Davies showed that for Emily nature is always both beautiful and destructive, just as the mother is always associated with death. Her earth is as much tomb as birthplace. 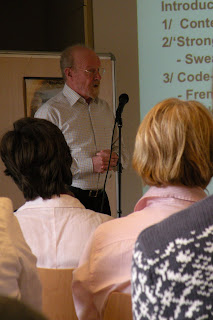 Philip Riley, a Brussels-based academic and socio-linguist, followed Davies' speech with his own presentation explaining why the Brontës' novels were so shocking when they first appeared. He began by presenting some common words from early reviews, including “licentious”, “offensive”, “vulgar” and “improper.” Even George Eliot, referring to Rochester’s conversations with Jane Eyre, said “I wish the characters would talk a little less like the heroes and heroines of police reports.”

These reactions, mostly contained in overall favourable reviews, can, said Riley, seem hard for us to understand. And they are not entirely explained by the fact that the words "hell", "damn" and "devil" were then by convention never fully spelt out in ‘respectable’ novels. The Brontës were not just licentious because they peppered their stories with these expletives. Their use of language was considered much more broadly improper. At a time when it was becoming increasingly common to use euphemisms for a wide range of “offensive” words (alcohol for a while became “peppermint”, said Riley), the Brontës dwelt openly on subjects like drunkenness and violence. Whilst a rule of silence was commonly used as a way to control people, in factories, prisons, schools or orphanages, the Brontë authors could easily be considered too free with their language.

The problem went even further than the words used by Charlotte, Emily and Anne, said Riley, and becomes even harder to spot with a 21st century eye. We can perhaps imagine that Heathcliff’s violence, Rochester’s attempted bigamy or Arthur Huntingdon’s alcoholism were not recommended reading matter for the Victorian middle classes. We are less likely to spot that the use of Latin, or an interest in dialect or physiognomy, were considered equally improper for women. Indeed this goes some way to explaining why many critics refused to believe that the Brontës were women, even when they dropped the ambiguous pseudonyms Acton, Ellis and Currer.