I was pleased to be in England over the Easter break and able to watch this documentary, one of ITV's Perspectives series. As a Brontë enthusiast I didn't expect a one-hour programme to tell me anything I didn't already know, but was interested in seeing how well the story was presented; for some viewers it would be their introduction to the family. But I also had two particular reasons for watching with interest. A novelty of this documentary was its recognition of the importance of Brussels for Charlotte Brontë, and last October the programme’s presenter, Sheila Hancock, and the film crew had spent an afternoon with members of our group exploring Charlotte and Emily's time in the city. My second reason was more personal. I knew that Sheila Hancock had also been filmed in the British Library looking at Charlotte's letters to M. Heger, and a couple of days before the broadcast I had at last carried out my long-standing intention of viewing the letters myself in the Library's manuscript room (see below).

The programme starts with the amazingly spry eighty-year-old presenter cavorting on a common in the south London suburb where she grew up. Bexleyheath, rather than the Yorkshire moors, was where she imagined herself as a girl to be Cathy after falling in love with Heathcliff – or rather with Heathcliff as she had seen him in the local cinema, portrayed by Laurence Olivier. That was before she came to realise that he was in fact 'a vicious psychopath'. The question she sets out to answer is: 'How did three spinsters who spent most of their life in a remote parsonage write books I find shocking, erotic and quite wonderful?'

Her quest for answers does not just take her to the Parsonage in Haworth, where she chats with the Museum curator about the Brontës' juvenile manuscripts while sitting in the tiny bedroom where the fantasy worlds of Gondal and Angria were created. She also goes to Roe Head School where the girls went as pupils and, in Charlotte's case, as a teacher; to the National Portrait Gallery and the British Library in London; and, of course, to Brussels.

On the Eurostar bound for Brussels she speaks of the sisters' plan to start a school of their own and their wish to improve their teaching qualifications by brushing up their foreign languages on the continent. Having just spent a chilly week that October filming on the Haworth moors, Sheila braved the cold of a freezing day in Brussels at the end of the month as she joined a group of our members on a guided walk led by Myriam Campinaire. Of the three hours of filming, less than three minutes made it off the cutting-room floor, but we all enjoyed being involved in the project and we're all smiling despite the weather. The programme makers felt there wasn't time to say much about Villette, which many viewers wouldn't have read. Instead, in Grand'Place after the walk, Sheila muses on how Charlotte's time in Belgium fed into the better-known Jane Eyre, and compares Jane's feelings on leaving Rochester with Charlotte's on leaving Brussels and Heger.

The programme more or less falls into three parts, the first focusing on Emily and Wuthering Heights, the second on Charlotte and Jane Eyre and the third on Anne and The Tenant of Wildfell Hall, her novel about marriage with an alcoholic, with Branwell being brought into the story as the example of alcoholism Anne had before her as she wrote. Sheila also talks to creative artists whose works have been inspired by the Brontës – dance choreographer David Nixon, playwright Polly Teale and artist Paula Rego. There was a danger that all this would be too much to pack into a short documentary, but by the end all the essential components of the Brontë story have been neatly fitted in.

The Brontës have obviously accompanied Sheila Hancock all her life, from her youthful passion for Wuthering Heights to her empathy much later in life, after losing her husband John Thaw ('Inspector Morse'), with Heathcliff’s sufferings when Cathy dies. Her genuine enthusiasm and emotion make this programme the moving tribute the Brontë story deserves.

A private viewing of the Brontë-Heger letters

On Thursday 27 March, at the start of one of the coldest Easter breaks I've ever experienced, I turned out of the busy Euston Road, past Paolozzi’s statue of a giant Newton crouching over his compasses and onto the piazza of the red-brick British Library. 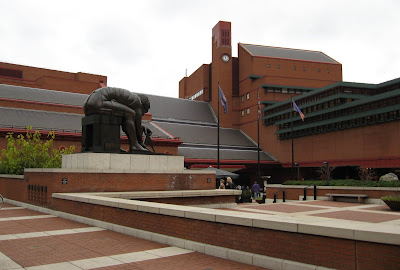 A few people were shivering over coffees on a cafe terrace this freezing morning.
I was eager to go inside the building, and not just to get out of the cold. I had an appointment to do something I'd wanted to for years – look at Charlotte Brontë's four extant letters to Constantin Heger.
The inside of the building is striking, with several levels of galleries running round an atrium whose centre, from floor to skylight, is occupied by a kind of massive glass-fronted bookcase packed with old leather-bound books.

Although I had not found the British Library website very user-friendly when pre-registering for a pass and requesting access to the letters, procedures in the building were relatively hassle-free. A rather stern man issued me with a reader's pass, taking a photo of me for this purpose every bit as unflattering as the one on my Brussels Royal Library card. In the manuscript room I had to present a letter of introduction before the first of Charlotte’s letters to M. Heger was drawn out of the wooden case in which they are kept and placed on a heavy leather-lined tray for me to peruse. Each is written on two sheets of notepaper which have been framed in glass so that you can read both sides of the sheets. Unlike another Brussels Brontë enthusiast who consulted the letters some years ago, I wasn't required to wear white gloves!

I knew that Sheila Hancock, when she was filmed looking at the letters as part of the Perspectives Brontë documentary, believed she had made a discovery when the camera zoomed in on a full stop, at the end of a paragraph, in the shape of a heart! I peered at the stop in question but, sadly, have to report that in my opinion any resemblance to a heart is coincidental! 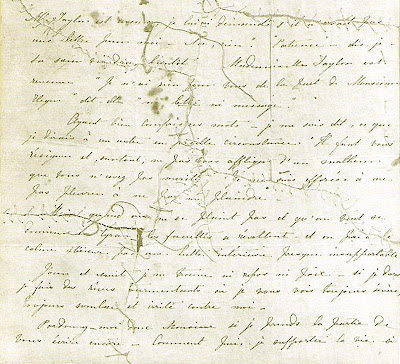 I had taken along the text of the letters but Charlotte's handwriting is so neat they were hardly necessary. Despite the tears in the paper where the letters were ripped up by Heger and the white stitches where they were sewn together again by his wife, it is quite easy to make out Charlotte's anguished words. I had found these moving before seeing them in the original. It goes without saying that it is even more moving to read them in manuscript as they left her pen, on the sheets she sent to Heger and that he tore up, and that have survived so miraculously to be read by us today.