Finally, I thought I saw a house in the far distance that looked like a house similar to the one in the picture. We took the byway, which led us to a peninsula off the Sky road peninsula, and arrived in a “village” (which we later found out to be Cill). We recognized the place, we had been there many years ago to try and find a B&B with angling facilities, where some Belgian anglers had been staying.

The house that I had seen in the distance was near that B&B, up the hill. Great was my joy when we arrived and it matched exactly the picture that I had in my hand. The sign next to the gate confirmed this. We had found “Kille House”! I was over the moon. 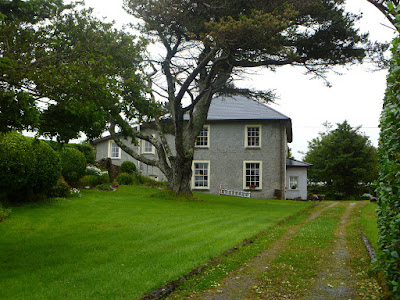 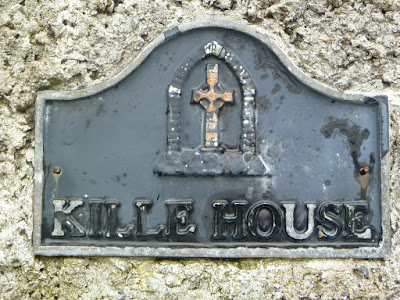 The house is now in private hands and cannot be visited. But just standing there at the gate and looking at the house was enough for me! Another personal mission accomplished!

Two weeks later we were back in Northern Ireland, Co. Down, to meet up with Margaret Livingston and Finny O’Sullivan from the Northern Irish Branch of the Brontë Society. Last year Margaret and Finny took us on the homeland trail to trace Rev. Patrick Brontë's roots. Finny mentioned some other places that we might visit this year, off the beaten track again, and certainly not on the homeland tour. So, off we went again, on a Brontë tour with a difference!

The first stop was Tully farm in Killead (Co. Antrim), the house where Arthur Bell Nicholls was born. It is a two-storey farmhouse looking out across the fields to Lough Neagh and the Sperrin mountains. The house has changed since the days that Arthur lived here with his parents, William and Margaret Nicholls (née Bell), and his brothers and sisters. Arthur lived here up to the age of 7 when he and his brother Alan moved to Cuba House in Banagher to live with their uncle Dr. Alan Bell and his family. Dr. Alan Bell raised the two boys as his own, offered them a good education and ensured a good start in life for them, which they would not have had if they had stayed in Killead. 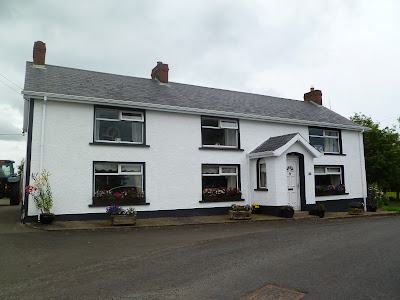 The next stop  on our tour was Killead Church and graveyard on Drennans Road, where we visited the grave of Arthur Bell Nicholls’ parents and some of his siblings. It is said that Arthur and his brother never went back to their birthplace and never saw their parents again, although the families did keep in touch. Margaret Nicholls née Bell was born in the nearby village of Glenavy, and that was where we were heading to next: Glenavy Church and graveyard. The Bell graves are not easy to find, you really must know where to look, but luckily for us, Finny did know. The graves are very overgrown and it is very difficult to decipher the names , but we could discover a few names of the Bell family on the gravestones. 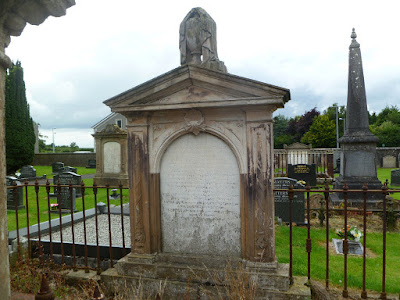 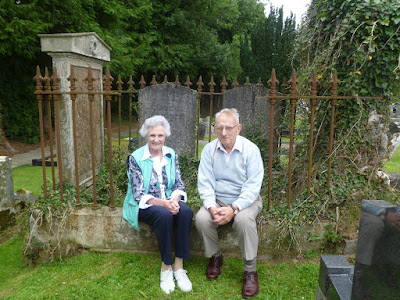 We had one more stop to do on this special tour: the protestant old Church of Magherally and its graveyard, a few miles out of Banbridge. It was here that Rev. Patrick Brontë’s parents Hugh Brunty and Alice McClory were secretly married in 1776. The church is a ruin nowadays, but enough is left of it to see how it would have looked like. An additional bonus at the graveyard (not Brontë related) was the fact that the famous Irish poet Helen Waddell (I came across her name and poems when doing research for my next calligraphy project on Irish poetry) was buried in this old graveyard. I knew she was from the area but did not know she was buried in this particular graveyard. 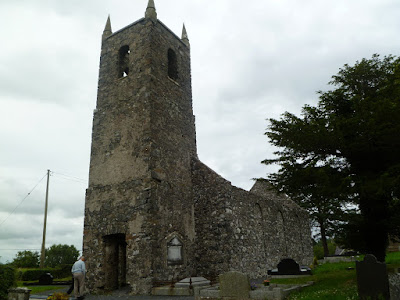 I really enjoyed this special tour and learned a lot about the relatives of Arthur Bell Nicholls, facts I had read about in the biographies (see note below), but came alive when visiting the actual area where the family had lived. Finny proved to be a real fountain of knowledge during this tour. Last year I thought we had seen all the Brontë links in Ireland. I wonder, what  next year will bring!

My husband and I are just back from Banagher. In fact it was your 2013 Brussels Bronte Blog post that alerted me to the fact his home, Hill House, was now a B and B and that inspired our trip!

Now I find you have inspired us yet again with your further adventures! What a marvelous trip and post! How grand to have a guide like Finny!

It's been a mystery to me for years why Arthur has been often ignored. Not just anyone could get a Bronte to the alter and make them happy! I've been a fan of his for many years

You may enjoy seeing my recent painting of Mr. Nicholls in mid-life

Thank you so much!

Sounds like a great trip! I've wanted to go to Banagher for many years. It looks lovely.