International copyright and Villette, or could Charlotte prevent a French translation?

“How much George Smith had to be initiated into the secret shrouding of the Brussels origin of the book can only be guessed from the fact that Charlotte pledged him to refuse and to prevent a French translation. He kept his word till after her death, but it was of little avail to check the pirates,” Winifred Gérin wrote in her biography of Charlotte Brontë. In her biography of Mrs. Gaskell she writes that Charlotte “had made a special agreement with George Smith.”  It is a widely held belief that Charlotte did her best to prevent a French translation, but did she really? And just as important, what could George Smith have done? This article deals with the latter question.

Gérin gave no source but she was at least partly inspired by Clement Shorter, by what he wrote in his Charlotte Brontë and her Circle (London, 1896). She must certainly have seen this book.
"But,” Shorter wrote, “in justice to the creator of these scathing portraits [of Madame Heger in The Professor and Villette], it may be mentioned that Charlotte Brontë took every precaution to prevent Villette from obtaining currency in the city which inspired it. She told Miss Wheelwright, with whom naturally, on her visits to London, she often discussed the Brussels life, that she had received a promise that there should be no translation, and that the book would never appear in the French language. One cannot therefore fix upon Charlotte Brontë any responsibility that immediately after her death the novel appeared in the only tongue understood by Madame Heger."


An even earlier reference to this story can be found in an 1890 article from The World, republished in my first book, Promised land, by an anonymous author, who had visited the Pensionnat: “M. Heger regards the fact that she retarded as long as possible the translation of the offending volumes as evidence of the secret regret she felt at the pain their contents would cause in Brussels.” Clearly then there is an even older source, but this could not be found.

International copyright law
In the early 1840s English authors began to fight seriously against ‘pirate’ editions of their works, Charles Dickens perhaps foremost. On the day after Charlotte and Emily had first presented themselves at the Pensionnat, 16 February 1842, The Times published an article with as headline: ‘French and Belgian piracies of English Works.’ The text was quoted from the Publisher’s Circular. “The attention of the legislature and of the Government is loudly called to the subject of foreign invasion of British copyright, which is daily increasing to a most serious extent.”
The report mentions some works “which had to encounter a serious obstacle in the French and Belgian editions, in the English language, published at Brussels, and by Galignani at Paris.” Stories from for instance Blackwood’s Magazine were quickly reprinted and brought to Britain, “to an extent of many thousands of copies … sold for four or five shillings” only, in a “vastly inferior edition.”

At this stage some countries had some sort of internal copyright laws. But there was no international copyright law yet. There was very little international law whatsoever, totally unlike the world we live in now. It was also a problem for French and German authors of course, making it an international movement. The campaign to get more copyright protection was quite successful. Fifteen years later there were a number of bilateral treaties in Europe, but no progress in dealing with America. And there was still not much protection. But these treaties were a big step forward.

The first success was a treaty between the United Kingdom and  Prussia in 1846, the most important of the German states. By that time Germany was not a political union. But a good deal of the country had formed an economical union (the ‘Zollverein’) by 1853, when 12 other German states had acceded to the treaty. This included, in Saxony, the city of Leipzig, a centre of book publishing. In 1853 there was a treaty with Hamburg, which was not part of the Zollverein. It’s based on the model of the Anglo-French treaty of 1851.

Charlotte on international copyright
Charlotte only once wrote about the copyright debate, in a letter to George Smith of 8 July 1851 (in: M. Smith, The letters of Charlotte Brontë, vol. 2, p 662-3):
“The International Copyright Meeting seems to have had but a barren result – judging from the Report in the “Literary Gazette”. I cannot see that Sir E. Bulwer and the rest did anything – nor can I well see what is in their power to do. The argument brought forward about the damage accruing to American National Literature from the present piratical system is a good and sound argument – but I am afraid the Publishers – honest men – are not yet mentally prepared to give such reasoning due weight – I should think that which refers to the injury inflicted on themselves by an oppressive competition in piracy would influence them more – but I suppose all established methods – be the same good or evil – are difficult to change.”
Charlotte wrote this referring to an international meeting in London. It was indeed one of the valid arguments about the piracy system that it made it hard for, for instance, American authors to get published. The same goes for Belgium. The rise of Belgian literature coincides with the decline of the pirate system in that country.

France
On 3 November 1851 France and the United Kingdom concluded a copyright treaty. The relevant clauses stipulate that an author “who may choose to reserve the right of translating” (to be mentioned on the title page), should, in Paris, register the book at the Bureau de la Librairie and deposit a copy at the Bibliothèque Nationale.
To get 5 years of protection, a translation, or at least a partial translation, should be registered within a year. So, in the case of Villette it means that in or before January 1854 Charlotte or her publisher had to present a translation of at least the first volume of the novel, or the translation copyright would expire. She would then have had two more years to finish the translation, or else, again, the copyright would expire. To make matters worse, there was practically no protection against ‘imitations,’ loosely rewritten versions of original works. 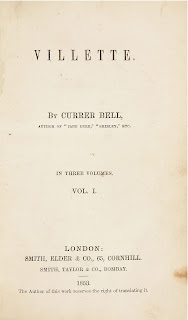 The title page of the Smith, Elder & Co Villette, with the added line: “The Author of this work reserves the right of translating it.” This line was needed to be able to obtain copyright.

Belgium
Belgium was one of the worst offenders, and the main source of pirated editions of French works. As thousands of jobs depended on it, the government was reluctant to address the problem. The industry helped destroy itself though, in a race to publish cheaper and cheaper. But they were still a big problem in 1851, as is shown in an article in The Times of 21 August:
“The negotiations opened by the French Government with Prussia, Saxony and Hanover, have failed. … The Saxon Government, however, recommended the French negotiators to employ all their efforts, first of all to destroy piracy in Belgium, saying, that, as long as it existed there, it would not be of much to put it down in Germany, as the Belgians would be sure to inundate the country more than ever with their pirated editions.”
A year and a day later there was a Belgian–French treaty. It was the beginning of the end of Belgian piracy.

Negotiations between Britain and Belgium will have started soon afterwards. Sloppy procedures and lingering reluctance on the Belgian side meant that it took until 12 August 1854 before a treaty was signed by the two monarchs. It was ratified by the British Parliament on 24 January 1855, and was signed by Queen Victoria one week later (The Times, 7 February). On 22 February the  ‘Convention artistique et litteraire conclue entre la Belgique et la Grande Bretagne’ was ratified by the Belgian Parliament (reported In that day’s Le Moniteur belge). King Leopold signed it very soon after. At any rate the date of the treaty coming into effect is given as 23 February 1855. The text is pretty similar to the Anglo-French treaty.  It stipulates that only works published after that date can be registered for copyright.
Clearly then this came too late for Charlotte, and it does of course mean that there was nothing she or George Smith could do to prevent a Belgian French translation. Charlotte must certainly have known that there was no treaty with Belgium when she wrote and published Villette, with which she could prevent a translation.

Other countries
More treaties would be signed in the next few years, but one with America remained elusive. Even though it seems that at one point, in March 1853 they came fairly close. In its edition of that month Putnam’s Monthly, a New York literary magazine, reported that “We are happy to learn there is a probability that before the present number will reach the remote readers, the terms of a Convention between the United and States and Great Britain, relating to International Copyright, will be made known.” There were more international copyright meetings, like the 1858 ‘Brussels Conference on literary and artistic property.’  In these further talks the main point of difference was the question of the length of protection.

The United Kingdom also didn’t have a copyright treaty with The Netherlands. This means that Charlotte also could in no way prevent a Dutch translation, either in The Netherlands or Belgium. While by far most people in Brussels spoke Dutch. Eventually America and The Netherlands both signed up to new international copyright law which replaced the bilateral treaties, decades later.

The treaties didn’t wipe out piracy at once. And there was still a very long way to go, to our copyright laws of today, which give an author protection for a work from publication to 70 years after death. Unfortunately piracy is now rampant again, because of internet.

This research shows that Gérin’s opening words of this article, and Shorter’s, are nonsense. Charlotte undoubtedly must have known that she was in no way able to prevent a French translation of Villette. She was powerless in Belgium. At best she could prevent one in France for one year. But did she at least try that? In the next article I will deal with that question.

With thanks to the Primary sources on copyright (1450-1900) website: http://www.copyrighthistory.org/cam/index.php
and a number of books on international copyright law.
Posted by Helen at Tuesday, February 02, 2016