Virtual Tour: Brussels When the Brontës Were Here

The Arts Society Brussels enjoyed a very special tour of the city last week, as Helen MacEwan, founder of the Brussels Brontë Group, hopped on Zoom to bring alive, at least virtually, the experience of Charlotte and Emily Brontë when they were in the Belgian capital in the first half of the nineteenth century. 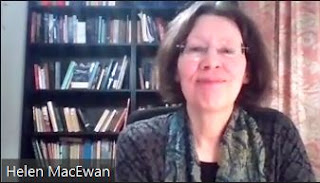 It was a delightful tour of Brussels in the early 1840s, illuminated with photos and paintings, as well as excerpts from letters and Charlotte’s novels, to guide the audience through the sisters’ experience on the Continent just over a decade after Belgium gained its independence.
Helen started with the novels. “Two of Charlotte’s four novels have nothing to do with the moors,” she said, referring to The Professor and Villette, both of which are set mostly in Brussels. While the Brontës are associated in many people’s minds with the wind-swept Yorkshire moors, Charlotte drew enormous inspiration from her time spent in Belgium – less than two years, but its influence can be seen in all of her books.

“Charlotte never wasted anything,” Helen said of Charlotte’s time in Brussels, which is called Villette in her novel. “Everything she experienced in Brussels went into Villette.”

For Emily, on the other hand, who spent far less time on the Continent, the influence of her experience here is much harder to gauge. “She left no direct impression of what she thought of Brussels,” Helen said.

While they were in Belgium, the sisters “were thought rather anti-social and odd,” according to Helen. But their seclusion was due to homesickness (not coronavirus). “Their isolation was really rather self-inflicted,” Helen told the Zoom audience on Wednesday, Jan. 13.

Charlotte was the sister who pushed for a time of study on the Continent from the start. After hearing about the possibilities in Brussels from her friend Mary Taylor, Charlotte wrote to Ellen Nussey about her desire to go: 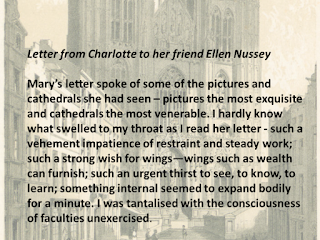 “Charlotte didn’t have wings or wealth, but she did have persuasive powers,” Helen said. “And Aunt Branwell was persuaded.” Aunt Branwell, who had come to take care of the Brontë children after their mother died, provided the money for the trip to Brussels. Helen explained how they found the Pensionnat Heger in the Rue d’Isabelle, down the stairs from the statue of General Belliard (which remains where it was in 1842, although the pensionnat is not so lucky).

A bit of Rue d’Isabelle still remains, but it’s underground, now part of the Coudenberg Palace excavations. Helen confessed to having “a bit of a panic attack” when she visited it due to claustrophobia. She showed images of how Rue d’Isabelle and the Pensionnat Heger looked in the nineteenth century, including a watercolor by Jacques Carabain.

Helen detailed how Charlotte’s Brussels experience shows up in her novels, including her relationship with the married teacher Constantin Heger at the pensionnat and the confession at the cathedral. In Villette, Lucy Snowe leads a very cloistered life, similar to Charlotte and Emily in Belgium, Helen said. And M. Paul is “like Heger in every respect except one – he’s single and he returns her love,” she said.

“Charlotte wasn’t always happy in Brussels, but it definitely had an influence on her,” Helen said. 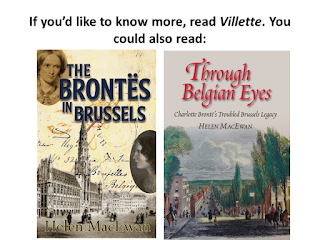