It has been a long time since I reviewed a “Brontë” book, but this one grabbed my attention immediately for a lot a reasons. In “Charlotte & Arthur,” Pauline Clooney tells the story of Charlotte Brontë and Arthur Bell Nicholls as they took their honeymoon in Wales and Ireland in 1854. 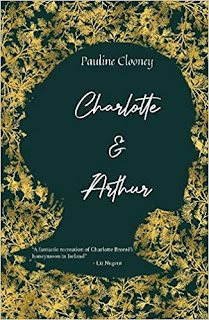 The book starts with the wedding day on 29th June 1854. In the first chapters, there are some flashbacks to how the wedding came about (not without its obstacles, as we all know), and the book then continues with the story of the honeymoon.

The couple first went to Wales and spent some time there, which they enjoyed in a way, but Charlotte was not in the best of health at that time. She was suffering from a bad cold.

They then continued their honeymoon to Ireland, starting in Dublin, where they met up with some of Arthur’s relatives and visited some of the city’s highlights. Then they continued to Banagher, where Arthur’s family lived and where he was raised by his aunt Henrietta. Here they spent some time with the family and Charlotte’s health was restored with the help of aunt Henrietta.

The honeymoon continued towards the Irish west coast and Kilkee where they stayed for a longer time. Charlotte was really taken by the beautiful scenery in this part of Ireland and described it in one of her letters, to Catherine Winkworth dated 27 July 1854, in which she expressed great enthusiasm for Kilkee and its surroundings:

“… went to the coast – such a wild iron-bound coast – with such an ocean-view as I had not yet seen – and such battling of waves with rocks as I had never imagined.

“My husband is not a poet or a poetical man – and one of my grand doubts before marriage was about 'congenial tastes' and so on. The first morning we went out on to the cliffs and saw the Atlantic coming in all white foam, I did not know whether I should get leave or time to take the matter in my own way. I did not want to talk – but I did want to look and be silent. Having hinted a petition, licence was not refused – covered with a rug to keep off the spray I was allowed to sit where I chose – and he only interrupted me when he thought I crept too near the edge of the cliff. So far he is always good in this way – and this protection which does not interfere or pretend is I believe a thousand times better than any half sort of pseudo sympathy …”

From Kilkee they went to Killarney which was a place that Charlotte’s father had longed to see. He had written a novel called “The Maid of Killarney” and Charlotte had read it for sure. Here after having received a letter from Martha Brown saying that the Reverend Patrick Brontë was unwell, Charlotte began to feel homesick. But they decided to continue their honeymoon as planned.

They stayed a while in Killarney, visited the Gap of Dunloe (where Charlotte was thrown off her horse but was not injured), and then went on to Glengarriff and finally Cork, where they decided to return home. They had been away for about a month.

These are the facts known to everyone familiar with Brontë biography. Of course, a lot of the conversation between Charlotte and Arthur recreated in this book springs from the imagination of the author. But it makes a wonderful read and one can believe that this really happened.

For me the book had another dimension: It took me back to places that I have really visited in Ireland and have wonderful memories of. I visited all those places, however not in the same order as Charlotte and Arthur did. The first time I visited them, I did not know that Charlotte also had been there, but my husband and I revisited them over the years with more attention to the facts known about their honeymoon (having by then also read a lot about the honeymoon) and trying to retrace their steps (as much as possible). In these times of COVID-19 travelling restrictions, I really enjoyed being taken back to Ireland and our holidays there!

For me the book really was very enjoyable. One of the reviews on the back cover says: “Imaginative and sensitive, this novel reveals the real Charlotte, as perhaps only a loving reader and a great storyteller can.” I could not agree more! In imagining what could have been said, the author really invites the reader to have a look into the heart and mind of Charlotte. During the honeymoon, it became clear from Charlotte’s letters that she really began to see her husband in a new light and appreciated him more for it.

This is an absolute must read for every Brontë fan!