For a second year our group had organised a weekend of events which would coincide with the date of Charlotte Brontë's birthday (21 April).

After nearly 6 months of planning, organising and promoting our weekend, this year started off with a Brontë evening in Waterstone’s, the English bookshop in Brussels, who kindly provided a specially set-up space and also drinks and nibbles. This was our test, to see how many would turn up to our event this time. We were actually quite surprised to see a great turn-out; some 60 people turned up, and some had to stand, as the chairs were all taken! Robert Barnard gladly accepted our invitation to come to this weekend and he introduced the evening, and with that the weekend, with his witty and erudite anecdotes. Also present were Derek Blyth, Maureen Peeck and Eric Ruijssenaars. 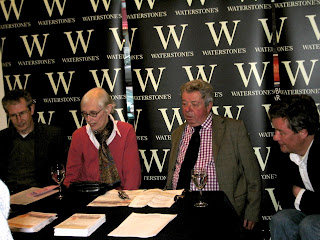 Maureen enlightened us with some wonderful perceptions of two ‘devoirs’ by Emily; Derek told the audience a bit about his experience of the Heger letters (he gave a talk about this last October) and Eric would answer any questions in a question and answer session after the talks. At the beginning people were a little shy and hesitant to ask questions, yet people were mingling and conversations flowing once the official part was over. 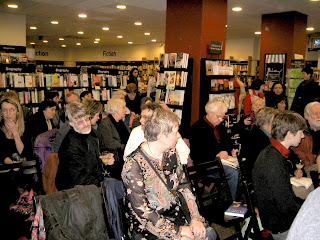 That is the moment people will start to meet others. Those attending came from near and far. We recognized members from the Czech Republic who also joined us last year. This time, however, they didn’t make the journey by bus! Old and new friendships were made when we walked to the Grand Place and decided to have a drink and talk in one of the old cafés. Our weekend had started of with a bang.

Saturday included a one-day conference entitled The Brontë sisters in Brussels organised by the public library Bibliothèque des Riches Claires, with assistance from us. This event was mainly down to them and so we had to wait and see how it would all go. The conference room was in the library which was situated in a lovely old part of Brussels, with a wonderful monument, the old Church of Riche Claires opposite us. 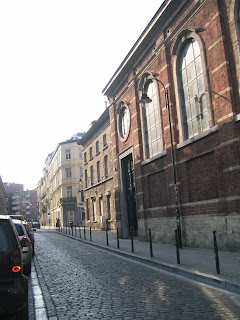 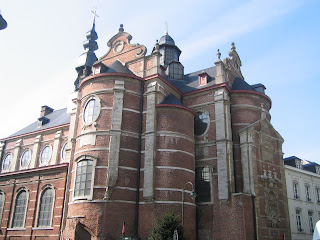 With still more people turning up for this day, the number of attendants was about 100. To our surprise the mayor of Brussels, Freddy Thielemans, was present and opened the conference day, with lively banter, switching easily and naturally from English to Dutch to French. Incredible! (That’s Brussels for you.) 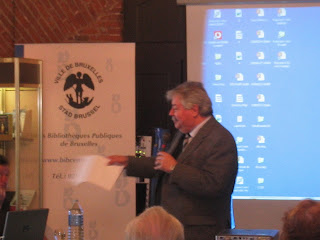 Six speakers, all with their different expertise, talked on a variety of subjects related to the Brontës, 19thC Brussels, the Hegers and other subjects. It was a long, and at times warm and fatiguing day but nevertheless very interesting and at times very amusing. Simultaneous interpretation was provided, so people could follow the speech on headphones. Both English and French were spoken. 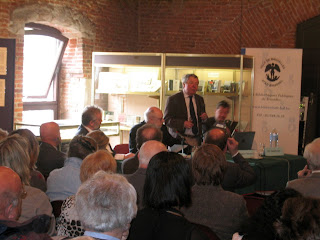 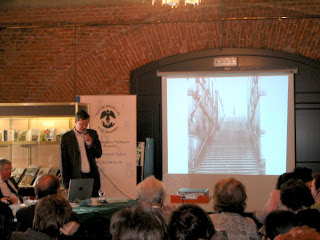 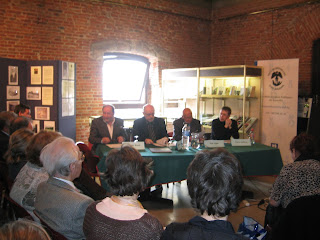 In the same room there was an exhibition called Les Soeurs Brontë à Bruxelles which was organised by the library to coincide with the conference and our weekend. Panels and glass cases were full of interesting pictures, photos and books on Brussels in the period of the Brontës' stay, a lot relating to the Quartier Isabelle and the Pensionnat Heger. There was also plenty of material on the Brontë and Heger families, and a display of Brontë novels and biographies in French from Brussels libraries.
In the evening a unique gastronomic occasion, a Victorian banquet, was on the programme, organised by ‘Le Centre de Gastronomie historique’.

On Sunday morning a guided walk around Brontë places in Brussels was organised, one group led by Derek Blyth and one by Eric Ruijssenaars. There was a tremendous amount of interest by people, so they were fully booked.
The weekend concluded with an informal meeting in A La Mort Subite, another characteristic old Brussels café, where we also had our afternoon tea last year. There were almost 30 people present, including many new members as well as those of us who were there from the start. The meeting was very productive with those present showing enthusiasm and coming up with inspiring ideas. There is a lot of creativity and talent we can draw from, so future events seem guaranteed. 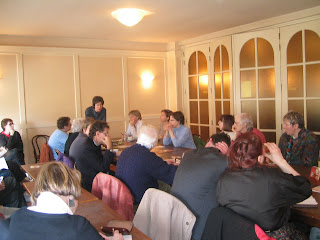 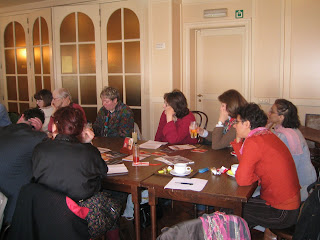 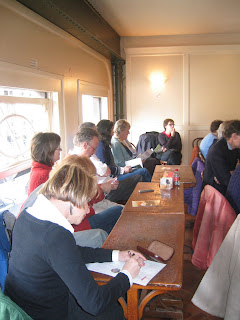 Again, our activities didn’t go unnoticed by the Belgian media; a radio interview with Eric on a Flemish radio station, and an article in ‘De Standaard’, written by Kristien Hemmerechts who visited our events, were among those.

In a relatively short space of time, only two years, we've grown from about five people to around 60, and new people are joining all the time. The Brontë weekend attracted a very large number of new members.

It seems the Brontës are here to stay in Brussels.