Glorious weather for our last guided walk of 2010 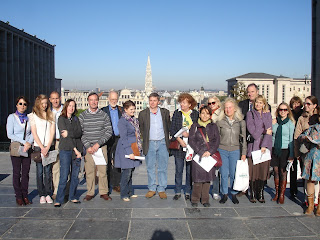 The group at the top of Mont des Arts 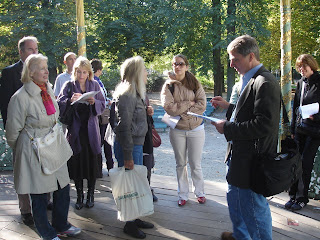 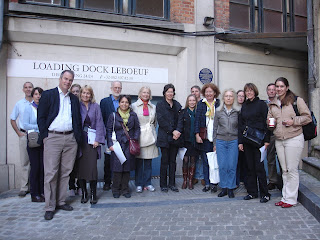 In front of the "unofficial" Brontë plaque

Since last Sunday we have a new Brontë walk guide, as Jones Hayden has volunteered to lead some of our walks. For some time now they have been led by Myriam Campinaire who’s been doing it brilliantly. In the past, walks have also been led by Eric Ruijssenaars and Derek Blyth, and it is to them we owe a lot of the research and material we draw on.

The sun shone and everyone looked happy for Jones's debut guiding on Sunday 10 October. We gathered at 10 a.m. on 10/10/10; it must have been an auspicious moment, for conditions were particularly favourable for that morning’s walk. Not only did the sun shine, but the guide didn’t have to contend with the usual noise of trams and buses on the cobbles of Place Royale, since it was closed for traffic for the Brussels marathon!

Jones, an American journalist who’s lived in Brussels for 10 years, enjoyed preparing his walk commentary and, like our first volunteer guide Myriam, has increased his knowledge about the history of the city - as well as about the Brontës - in the process.

Although the area covered by the walk is a compact one focusing on places near the site of the Pensionnat Heger, there is no shortage of things to be said about the area and its buildings, the Pensionnat and the Hegers, the Brontë sisters’ stay there, the Brontës in general, Villette, The Professor… the difficulty is packing it all into two hours.

As always, a multinational group had gathered to listen. Today our 19 participants were Belgian, British (two from Yorkshire!), Irish, American, Polish, Bulgarian, Russian and French.

After the walk we adjourned, as usual, to one of the museum cafés on Place Royale to continue talking about the Brontës and much else beside.

We’re lucky to have two such able and enthusiastic guides as Myriam and Jones. Each has developed his/her own version of the basic walk commentary, so with Jones there was new information to glean for those who had been on a previous walk.

This was the last walk of 2010. We’ll start up again once warmer days return, probably not until our April weekend (1-3 April). Join Myriam or Jones next year to learn about the Brontës and Brussels!