Villette in the US, or the story of the first American visitor to the Pensionnat in 1858

William Makepeace Thackeray was in the United States, for a lecturing tour, when Villette was published. He wrote about the novel in several letters, and, according to Winifred Gérin in her Charlotte biography, “the rage the book was enjoying among lady-readers over there.” A look in The Letters and private papers of William Makepeace Thackeray (volume 3, London, 1946) reveals however that there are only two references to the popularity of Villette in America. On 11 March 1853 he writes a letter in Charleston, to Lucy Baxter in New York City (pp. 232-3): “So you are all reading Villette to one another – a pretty amusement to be sure – I wish I was a hearing of you and a smoakin of a cigar the while. “ That remark was followed by his opinion of the novel. On 5 April he wrote from New York City to a Mrs. Mayne in London (p. 253): “Here the reign of novels is for a brief season, indeed, and “My novel” [by Edward Bulwer-Lytton] and “Villette,” have long since had the better of Mr. Esmond and his periwigged companions.”

It is certain that Villette was much more popular in America than it was in England. Smith, Elder & Co seem to have published just two editions of the novel in the 1850s. The second one was published in 1855. Harper & Brothers, from New York, published six editions in the 1850s. Apart from the two previously mentioned books of 1853 they also had an edition in 1855, 1856, 1857 and 1859. There is also an 1857 edition of Derby & Jackson from New York & Cincinnati.


The popularity of Villette in America is also reflected in what we know of the first Brontë visitors to the Pensionnat. The three first known visitors (after Mrs. Gaskell) are Americans.  One of these early visitors, Adeline Trafton, in 1871 (see below), who was there with friends, wrote about their introduction at the Pensionnat, having been let in by a teacher. “’We are a party of American girls,’ we said, ‘who, having learned to know and love Charlotte Brontë through her books, desire to see the garden of which she wrote in Villette.’ ‘Oh, certainly,’ was the gracious response.  ‘Americans often come to visit the school and the garden.’” The anonymous author of the 1890 article in The World wrote that the Pensionnat “has become the Mecca of American travellers. The average Britisher is content with worshipping at the shrine of the Waterloo ballroom, but the literary Yankee finds out Charlotte Brontë’s school, searches in vain for the Allée Défendue, and carries away a leaf from one of the giant pear trees. “

And Marion Harland, in 1898 quoted a Pensionnat teacher who had let her in: “So many English and Americans, many more Americans than English, come here every year, and talk, oh, so much! of Mlle. Lucie and Mme. Beck and Mlle. Charlotte, and the Ghost” (Promised land, pp. 59, 68 and 80).

The Americans will have been more inquisitive than the English too, one would suppose. It may also well be that the Americans were more welcome, as the article which follows here suggests. In it an American man is warmly welcomed by the Heger family in early 1858. The Pensionnat, it turns out, had at least one American pupil then.

There is one article written by someone who visited the Pensionnat that has hardly been seen by Brontëites. The anonymous author is the first known visitor after Mrs. Gaskell. The article, titled ‘Vagabondizing in Belgium,’ was published in August 1858, in Harper’s New Monthly Magazine (vol. 17, issue 99). This journal was published by Harper & Brothers. It’s only in the last two pages of the 14-page article that the account of the Pensionnat visit is given. The first page of the article has a lovely drawing of ‘Currer Bell’s pear-tree garden,’ made by the author.

The author set sail to Southampton on 31 October 1857, with just “thirty eight dollars and sixty cents” in his pocket. That surely accounts for the word vagabondizing. He states he has “many years” of vagabondizing experience. From England he first went to Paris, and then to Antwerp where he was at the beginning of December. On the 7th he went to Ghent, and a few days later to Brussels, because he needed money. He did a translation job, which was to make him “independent for a month or two.” He writes that it allowed him to make “frequent excursions into the country.” It’s the only job he seems to have done, so it would seem likely that by the end of February he will have left Belgium, and gone back to the United States. However, his drawing is not one of a winter garden. The trees are full in leaves. It looks more like May, or even later. This seems to be good evidence for him still being in Belgium in May.

He seems to suggest too that he had been received by the Belgian king. Although l’indépendance belge regularly wrote that “le Roi a reçu” certain persons, the newspaper didn’t report him meeting the author. Nor did it mention the American in any other way.

We have been able to identify this hitherto anonymous author. His name was Marshall Talbot. Under that name he published another (nicely illustrated) article in Harper’s New Monthly Magazine of March 1862, 'How the Dutch are taking Holland'. He says he wrote it in 1861, and in it he recalls when he was a school-boy, about 30 years ago. Genealogical research reveals he was born in New York City in 1822, and was still living there on the eve of his journey to Belgium. Talbot’s request for a passport gives this description of him: “Age 35, 6' tall, high forehead, blue eyes, long nose, ordinary mouth, grey hair, blonde complexion, face long, native of New York State.”

In 1861 and 1862 we find him in Brussels again, as an agent for the North in the American Civil War (1861-1865). They feared that France would join the war on the side of the southern Confederacy forces, who in order to retain slavery wanted to secede from the United States. Talbot tried to influence public opinion by having for instance favorable articles for the North published in l’indépendance belge.

By 1863 he was apparently back in America, near Des Moines, Iowa, where it is said he was an active local politician. He probably never married, and seems to have died in 1879, in Polk City, near Des Moines. On the internet there are a few references in which he is described as a “crayon portrait artist”, and also as a “strange genius” (without giving further explanation).

It is interesting that Madame Heger had no hesitation to meet him, whereas two years earlier she had refused to see Mrs. Gaskell. Later visitors also did not see Madame. Talbot wasn’t that interested in talking with the Hegers though. His main interest was to make the drawing of the garden. It couldn’t be seen from outside. It was easy therefore for Villette visitors to use the garden as an excuse for longing to see the Pensionnat. Monsieur Heger will have been pleased to see his garden being admired.

Talbot had a rather strange obsession for women. “For days I searched along the boulevards … but nowhere could my eye slight upon a beautiful woman.” He tried other places, but “even there I found no belles – none that would pass for belles in Baltimore.” At last he determined to try a school, and went to the Pensionnat.

It is also interesting that he liked the Flemish people much more than the French speaking Belgians, and that he spotted a lot of Spanish Belgians. 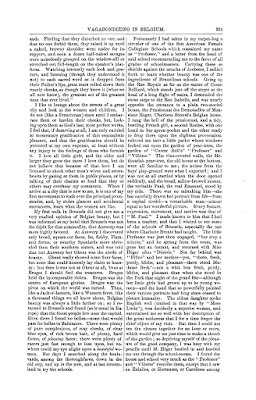 The full article can be read here. Unfortunately no letters or diary appear to have survived that could give another account of his visit to the Pensionnat, if ever he wrote one at all.

Charlotte Forten Grimké (1837-1914), an Afro-American lady, wrote about the article in her diary (in The journals of Charlotte Forten Grimké, Oxford 1988, p. 330). She wrote on Wednesday, August 11 1858: “Sewed, read in “Harper’s” some beautifully written “Criticisms on Italy” and a very interesting paper by a genius Yankee, “Vagabondizing in Belgium.” Among a number of Brontë references in her diary we find that, on 1 October 1857 she, “after school read “Villette” and studied French.”

Adeline Trafton’s article, published in December 1871 in Scribner’s Monthly, is part of a Brussels chapter in her book of 1872, An American girl abroad. It also has a Belgian chapter, with visits to Waterloo, Antwerp and other places. Then she goes to Holland, Germany, Switzerland and back to Paris. A digitized copy of the book can be seen here (with the Pensionnat story beginning on page 115). Her group of girls feeling so excited to be at the Pensionnat (“We will only ask permission to see the garden”) illustrates well the early popularity of Villette in America, the country that kept the novel alive in the first decades after its publication.

The Americans have been doing very well in digitizing nineteenth century journals. No other articles have turned up in these. Perhaps something more can be found in American newspapers though, or diaries and letters collections. The story of Villette in the 1850s isn’t entirely finished research yet.

With thanks to Brian Bracken for contributing research to this series.
Posted by Helen at Thursday, March 17, 2016