The Brontës by Juliet Barker 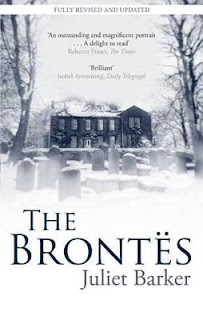 I’ve never done more than one post about a single book (except read-alongs), but I’ll open an exception for this one. It’s not just because it’s probably the biggest book I’ve ever picked up, but I’m half-way through it and it’s fascinating enough to make me want to put some thoughts down. This is compulsory reading for anyone with an interest in the Brontës and don’t be intimidated by its size: it’s one of those books that just floooows.

Juliet Barker’s approach is that a reliable biography of each Brontë cannot be done in isolation, since their lives were too connected and they constantly inspired each other’s works. She’s also in the business of myth-busting.

It was especially enlightening to read this after Elizabeth Gaskell’s The Life of Charlotte Brontë. While Gaskell’s clear agenda was to give a sympathetic view of Charlotte and ease the shock the family’s books generated at the time, she did it by making certain sacrifices. Patrick and Branwell for instance, were not portrayed in the best of lights and it was clear Gaskell bent the truth to carry this argument.

The Life is responsible for many Brontë legends, namely “poor Charlotte” (the martyr daughter and saintly sister) and Emily as the romantic and wild free spirit. With The Brontës, Barker set out to defy these and other dogmas by diligently re-visiting all direct and indirect sources and re-accessing every established assumption.

My perception of Charlotte in particular changed from the “picture of perfection” image I had of her. I was spellbound by her struggle between her duty towards her family (a job she didn’t like and was bad) and the ever-present temptation of her imaginary worlds.

I discussed this book with other Brontë fans and some thought Barker was sometimes too set on thoroughness at the expensed of compelling story telling (the opposite of Mrs. Gaskell?). I didn’t feel that way, even though I admit to a few skims here and there. Baker’s very keen on describing several juvenilia characters and after a while it became too difficult to keep up with who killed, (de)crowned or married whom. Certain parts on the religious and political activism that took so much of Patrick’s time could also have used a little trimming, but the fact remains these were central events in the family’s lives.

Other myths Barker busted included the image of Haworth as an isolate, stagnated village, Branwell being an alcoholic from a very early age and Patrick as a severe and distant father. And we’re only talking about the first half of the book!


There was one debunking where I felt Barker went too far. The Brontë’s two elder sisters – Maria and Elizabeth – died of TB contracted in the boarding school Charlotte also attended. Charlotte was so traumatized by her time there as seen in Jane Eyre’s first chapters. Barker puts these experiences into perspective: Roe Head was bad, but not that bad compared to other schools and their mortality rates, malnutrition and aggressive daily routines were better than average. Somehow, perspective just doesn’t stick as a compelling argument in these cases. Better unhuman conditions are still unhuman conditions. The nightmare at Roe Head is one Brontë legend I can live with.
I’m just at the point in their lives where Charlotte and Emily arrive in Brussels. The voyeur in me is looking forward to Charlotte’s relationship with Mr. Heger, Branwell’s downfall and future literary disappointments

As I’ve mentioned in the first part, I don’t usually write multiple posts about a single book outside read-alongs. However, there’s just too much to explore in Juliet Barker’s The Brontës. It’s an amazing portrait of the family, and has deservingly become known as the biography for all of them. It’s the perfect choice for a brave bookclub like mine, who agreed to tackle this 900+ page mammoth.

The second half of the book starts right after Charlotte and Emily arrive in Brussels and begins her lessons with Monsieur Heger. Strangely enough, it’s not Charlotte’s falling desperately in love that’s the most interesting part of this period, but understanding the influence he had on her writing. He gave her focus and drive, and he encouraged her to write about what she knew. Charlotte’s journey from the enchanted world of Gondal to the almost autobiographical Jane Eyre is remarkably similar to the one made by two fictional characters with similar literary aspirations: Little Women’s Jo and Anne of Green Gables.

Emily on the other hand, didn’t let go of her juvenilia and seemed immune to Heger’s teachings:


Having spent most of her life at home, Emily had always been the one most dedicated to, and involved in, her imaginary world. There was no perceivable break between her Gondal writing and her novel; indeed it seems likely that she went straight from writing her long Gondal poem “The Prisoner”, to Wuthering Heights.

It’s also in this second half of the book that we get to see that the beginnings of some of the most famous novels in the English language. Fascinating stuff!

Something I didn’t know: Emily might have written a second book. Barker has very good arguments to support this as well as the theory that it was destroyed by Charlotte, to prevent another “coarse” novel to be published and further harm her sister’s reputation. As is normal with Brontë-related non-fiction, Charlotte takes center stage due to the amount material biographers have to work with. After the portrait of sainthood painted by Mrs. Gaskell in her version, it’s truly illuminating to finally see Charlotte in 3D, with all her weaknesses and inconsistencies. I’m not sure we would get along if we ever met, I’m afraid. I’m too outraged at the way she handled her sisters’ (especially Anne’s) work after their deaths. Her defense of their themes and writing style (they dared to actually using the word “damn”, instead of “d–“!) wasn’t very brave or true to their nature. She presented them as secluded virgins with an overwrought imagination who didn’t know what they were doing instead of, for instance, argumentation in favor of Anne’s moral and religious motivations for writing The Tenant of Wildfell Hall (can you tell I’m an Anne fan?). I also was shocked at how Charlotte heavily re-wrote  edited their poems, sometimes completely changing the original meaning.

I know Charlotte is considered ground-breaking in her writing, especially in Jane Eyre, but after reading most of the Brontë novels (only missing The Professor and Shirley), she strikes me as the most conventional of the three, the one who risked less. Even on the issue of governesses, Agnes Grey was much stronger in its realism and brutality.


This [women’s rights to work] was a subject to which Charlotte would return again and again, it being one of obvious  relevance to her own situation. One cannot  escape the conclusion that her intellectual engagement with the subject arose purely and simply as a  result of her own unhappiness. if she had been financially independent, “the condition of women”, would not have mattered to her.

But to give her credit, she did show great spirit at time, like her head-to-head with the great William Makepeace Thackeray, who she idolized but never the less receive a piece of her mind when he deserved it.

Barker’s description of the dramatic moments of the family’s deaths were the first time a non-fiction book made me cry. Anne’s death in particular was hard to read because we not only have Charlotte’s description, but also that of Ellen Nussey, an intimate family friend.

It was Ellen, together with Mrs. Gaskell and Charlotte’s friend and publisher George Smith, that made my blood boil in the book’s last chapters. Barker does a wonderful job of piecing together the creation of The Life of Charlotte Brontë, which became the beginning of what Lucasta Miller described as “the Brontë myth”. The three of them did Charlotte a great injustice, not only with the border-line-illegal ways used to gather materials, but especially in the portrayal her family, which would be the accepted version for centuries to come: “poor Charlotte”; not-of-this-world Emily; Branwell, the black-sheep; Patrick, the distant and harsh father; Arthur the domineering husband.

Also, next time someone argues that the media’s exploitation of the personal life of celebrities is a modern phenomenon, I’ll have to gently disagree, after reading about what happened after Charlotte’s death.

Barker has clearly set out to de-bunk most of the Brontë myths and has done a great job of it. It’s almost an historical moment to see their true characters finally starting to surface, after all this time.