The Kilkee cliff walk is a scenic loop walk which follows a cliff path along the coastline, passing the truly breathtaking and very varied rugged coastline and returns to Kilkee via the ingoing road. It is certainly worthwhile doing this cliff walk as you come along truly magnificent and stunning sea cliff views around every corner you take. 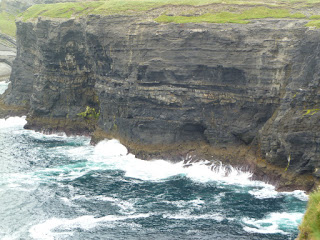 It is of course impossible to know where exactly Charlotte and Arthur sat at the cliffs to enjoy the scenery, but there was one place that I really thought could have been the place described in Charlottes’s letter to Catherine Winkworth (dated 27 July 1854),  in which she expressed great enthusiasm for Kilkee and its surroundings:


“… - went to the coast - such a wild iron-bound coast - with such an ocean-view as I had not yet seen - and such battling of waves with rocks as I had never imagined. My husband is not a poet or a poetical man - and one of my grand doubts before marriage was about 'congenial tastes' and so on. The first morning we went out on to the cliffs and saw the Atlantic coming in all white foam, I did not know whether I should get leave or time to take the matter in my own way. I did not want to talk - but I did want to look and be silent. Having hinted a petition, licence was not refused – covered with a rug to keep of the spray I was allowed to sit where I chose - and he only interrupted me when he thought I crept too near the edge of the cliff. So far he is always good in this way - and this protection which does not interfere or pretend is I believe a thousand times better than any half sort of pseudo sympathy ...” 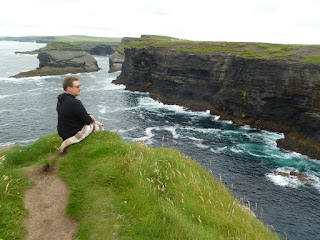 With a bit of imagination, I could see them sitting at that particular spot near the cliffs.
So, armed with a rug Paul and I stepped into Charlotte and Arthur’s footsteps: I found a “comfortable” seating near the edge, Paul covered me with the rug (as loving husbands tend to do), then we both sat silently watching the great rollers of the Atlantic ocean coming in and  battering at the rocks down below, with the water foaming and splashing, we could feel the light spray blowing towards us and taste the salt of the sea. I’m sure, many passers-by will have wondered what that odd couple were doing on the edge of the cliff, but we did not care at all. That particular moment was ours! Paul of course had to get up to take a picture of this scene (not really a Victorian woman in the picture, I’m afraid, but at least, we tried to capture the image!). 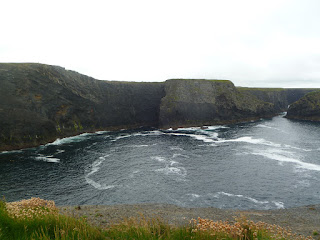 Contrary to what Charlotte thought of her husband (not being poetical), Arthur also described their visit to Kilkee, in a very poetical way, in one of his letters (to George Sowden, August 1854):


“ … we also diverged to Kilkee, a glorious watering place, with the finest shore I ever saw – Completely girdled with stupendous cliffs – it was most refreshing to sit on a rock and look out on the broad Atlantic boiling and foaming at our feet…”

Of course, nowadays, ”silence” at the Kilkee cliffs is not for long as this cliff walk is a popular walk among locals (with or without a dog) and tourists. So we just continued the walk and enjoyed the scenery, as I’m sure Charlotte and Arthur must have done while at the same time enjoying their holidays and each other’s company. 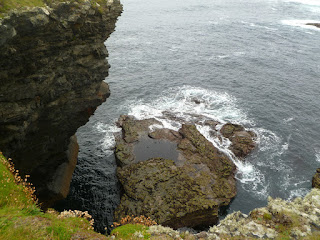 Our visit to Kilkee was short but memorable. An advertisement about Kilkee says:
“Kilkee by the sea – it’s the beauty and tranquility that sets your mind free”.
I’m sure that Charlotte and Arthur have felt this to be true and it is certainly true for us!