2017 is the bicentenary celebration year of Branwell Brontë’s birth, so my husband and I decided, as we were coming back from our holidays in Ireland, to make a stop in the Lake District and explore the Brontë links with this area, with a particular focus on Branwell. As we were staying in the area for two full days, we decided to also visit the places linked to one of the most famous Lake District poets, William Wordsworth.

We found lodgings in Rydal Lodge hotel, a beautiful historic house located near Rydal Water “in the heart of Wordsworth’s English lakes” and situated just opposite the entrance driveway to Rydal Mount, last home of William Wordsworth. It is ideally located for exploring the Lake District, with a bus stop just outside the house connecting the main Lake District destinations.


On the first day of our visit to the Lake district the weather turned out very well (bright, sunny and dry) and we decided to explore the immediate area first, so this meant that we were going to visit the houses associated with William Wordsworth. It was evident that our first visit would be Rydal Mount, as it was just a few meters from our lodgings.

On our way up to Rydal Mount, we also passed Rydal St Mary’s Church. Wordsworth and his family worshipped here. Wordsworth was also church warden from 1833-1834 and inside the church there is a memorial plaque to him. St Mary’s is built on rocky ground and that is the reason why there is no cemetery. All burials were done at nearby Grasmere , in St. Oswald’s Church,  and coffins (amongst others with the remains of the Wordsworth family and Hartley Coleridge) would have been carried to their final burial place via the “Coffin route”. Adjacent to St Mary’s Church is Dora’s Field which was bought by Wordsworth originally to build a house. This plan never materialized and after the death of his daughter Dora in 1847, Wordsworth and his wife Mary and sister Dorothy planted hundreds of daffodils as a memorial to Dora. 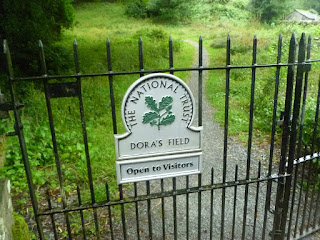 Rydal Mount was Wordsworth’s best loved family home and he lived here with his family from 1813 till his death in 1850 at the age of 80. Wordsworth never owned the place, he rented it from lady le Fleming from nearby Rydal Hall. The house is now owned by the Wordsworth family and is open to the public since 1970. The house was a literary haven for many writers and poets, such as Samuel Taylor and Hartley Coleridge, Harriet Martineau, Robert Southey and many others. The house has changed little since Wordsworth lived here. There are a number of rooms open to visitors: the dining room, the library, the drawing room on the ground floor, upstairs: William and Mary’s bedroom, Dora’s bedroom and Dorothy’s bedroom, and in the attic: Wordsworth’s study. It contains many portraits, personal possessions and objects owned and used by the Wordsworth family, and some first editions of the poet’s work. It is here that he wrote many of his poems and revised and improved much of his earlier work, e.g. his famous “Daffodils” poem.


The Romantic style gardens were designed by Wordsworth who was a keen landscape gardener, as was the rest of the family. The four acre garden remains much as he designed it with rare shrubs, terraces, lawns, rock pools, and an ancient mound with a view of Windermere and Rydal lakes. A special feature at the top of the garden, tucked away from the main house, is the poet’s Summerhouse (or “Writing Hut”) where he spent a lot of his writing time – it consists merely of a bench with a small roof, but it provided shelter from the weather and an escape from the house. Wordsworth often said that the gardens were his office and he is believed to have written and recited much of his work in his summerhouse.


From Rydal Mount we decided to walk all the way to Grasmere via the aforementioned Coffin Route. This is a very scenic route with stunning views of Rydal Water and is very popular with walkers. The path is very narrow at places, and goes up and down, until it reaches Grasmere. One cannot help wondering how they managed to  carry coffins up to Grasmere, it must have been very difficult indeed!


The Coffin Route ends when entering Grasmere, and  one of the first houses we came across was Dove Cottage. This was the home of William and Dorothy from 1799 to 1808. William married  Mary Hutchinson in 1802 when he lived here, the three oldest children (John, Dora and Thomas) were born here and when the family expanded, they had to move to a larger property. It was here that Wordsworth’s best poetry was written. Dove Cottage is a very lovely quirky old cottage. Before the Wordsworths moved in, it was an inn called “the Dove and Olive Inn”. Many of the present features of the house date from this period. The rooms downstairs (a reception/dining room, downstairs bedroom, kitchen and buttery) are small and dark with dark wood panelling and slate floors. Upstairs were the living quarters (sitting room, William’s and after his marriage Dorothy’s bedroom, a guest bedroom and the children’s room with all walls papered with newspapers of the time) and these were brighter and larger. Here also the Wordsworths received many famous guests (Samuel Taylor Coleridge was probably their most frequent visitor). After visiting the house we explored the lovely  little garden, which Wordsworth called “their little domestic slip of mountain”. The sign on the gate is very inviting: “Stop here when you are weary, and rest as in a sanctuary””. There is a path that winds all around the house and brings you to the highest point in the garden where you have a view of the lake. The garden was very important to both William and Dorothy and they introduced lots of plants that they collected from their walks in the area.

After having had some refreshments in the tearoom near Dove Cottage we walked to Grasmere village to visit St Oswald’s Church and cemetery. This was the parish church of Grasmere and Rydal where all the burials took place. Inside the church there is a memorial tablet for William Wordsworth, originally destined for Westminster Cathedral, but Wordsworth wanted to be buried in Grasmere. In the cemetery there is a simple tombstone for William and his wife. In the same plot are buried his sister Dorothy, his wife’s sister Sara Hutchinson, four of his children (amongst others Dora and her husband) and other members of the family. Also Hartley Coleridge who lived at Nab Cottage at Rydal was buried here. They lie in the shade of a yew tree, one of eight yew trees planted by Wordsworth.