The second day of our visit was fully focused on Branwell and his Cumbria/Lake District experience.
Our destination was Broughton-in-Furness, situated in the southern part of the Cumbrian Lake District. This pretty little market town on the Duddon estuary was once home to Branwell for a short time when he was tutor with the Postlethwaite family. It is advertised as being  “an ideal base for a walking or climbing holiday, with ample opportunity to explore the rugged beauty of the Duddon valley and the quieter Lake District fells.”

The weather was not so kind to us that day, it was raining cats and dogs. We arrived in Broughton via the road from Coniston. Branwell would have taken another way: he would have travelled from Haworth to Kendal where he stayed for the night (and according to one of his letters to John Brown, got drunk for the last time), then to Ulverston (which was the administrative centre of the Furness district then) by coach and would have travelled the last 10 miles to Broughton probably by gig. The area around Broughton is  very wild and mountainous and was a source of inspiration to many poets, such as Wordsworth. To the west of Broughton you can see (on a good day) the peak of Black Combe mountain which is a landmark for the area. One can imagine that Branwell would have been very happy and excited  with this sight, it certainly would have stirred his poetic nature. Branwell described Broughton in a letter to John Brown (dated 13 March 1840): “I am fixed in a little retired town by the sea-shore, among woody hills that rise round me – huge, rocky, and capped  with clouds.” 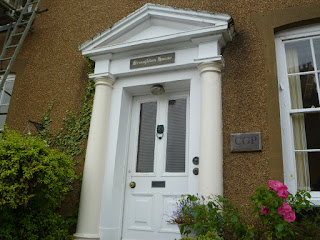 We parked the car on Station Road, and armed with an umbrella, went to look for Broughton House.  We did not have a map of the town, so we asked  a passer-by for directions and he showed us the way. We did not have to go far and we could not miss it: Broughton House was just down the road in Griffin Street, on the corner, opposite the 17th century Old King’s Head Inn:  a big three-storey house in scaffolding. This was the home of the Postlethwaite family when Branwell arrived in Broughton on New Year’s day in 1840. He had been employed by Mr. Robert Postlethwaite as a tutor to the two young sons John and William, aged respectively 12 and 10½.  Branwell described his employer in his  letter to John Brown (dated 13 March 1840)  as “a large landowner, and of a right hearty  and generous disposition“,  his wife as “a quiet, silent and amiable woman” and the two boys as “fine, spirited lads”. Branwell was certainly determined to make a good impression on his employer. And he seemed to have had quite a lot of freedom in tutoring the boys. He seemed to have had enough leisure time to sketch and write poems (a sketch of Broughton Church and a poem on Black Combe are clear evidence of this).


Branwell did not live in Broughton House, so we went to look for the house where he actually stayed during his employment. On our way into Broughton, we had passed the elegant market square with its obelisk (commemorating the golden jubilee of George III of 1810) situated in the middle of the square, surrounded by Georgian houses and horse chestnut trees. The Tourist information centre was located in the old Town Hall, once also the market hall. The market square was just at the other end of Griffin Street, so that was where we were heading first. In the small tourist office we found all the information we needed. The lady in charge directed us to the Syke estate, a little bit out of the centre, but still in walking distance. It was still raining, but this was not going to stop us from completing the mission. 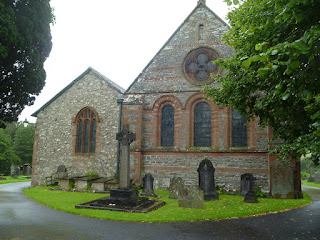 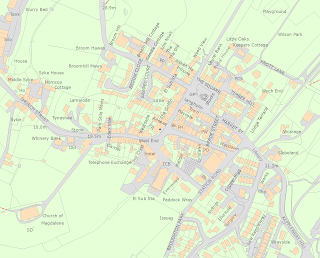 We went back to Griffin Street, past Broughton House and turning the corner, where  the road (Church Street)  winds its way up a steep hill and goes right into the old Syke estate, now divided into different houses and cottages.
Before entering the estate we visited Broughton Church (Church of St. Mary Magdalene) which stood a little isolated off the main road in the fields below the town. A drawing of this church made by Branwell has survived. Branwell would have seen this church from his lodgings.

We then continued Church Street, passing the old School House, houses, farms and cottages that once belonged to the Syke estate and ending up at High Syke House, the last house before reaching the top at High Cross. This is the house where Branwell took his lodgings during his employment by Mr. Postlethwaite. As the datestone above the door confirms, the house was built in 1753 by Robert Robinson. It is a long low farmhouse, the centre being the original house to which extensions were built in stages. In 1840 (during Branwell’s time) the house was occupied by one of the local surgeons Dr. Edward Fish  and his family. Branwell gave a description of his landlord’s family  in his letter to John Brown: “My landlord is a respectable surgeon, and six days out of seven is as drunk as a lord! His wife is a bustling, chattering, kind-hearted soul; and his daughter! – oh! death and damnation!”
In the same letter he continues to describe what they might think of him: “A most calm, sedate, sober, abstemious, patient, mild-hearted, virtuous, gentlemanly philosopher, - the picture of good works, and the treasure-house of righteous thoughts – Cards  are shuffled under the tablecloth, glasses are thrust into the cupboard, if I enter the room. I take neither spirits, wine nor malt liquors, I dress in black and smile like a saint or martyr. Everybody says, ‘What a good young Gentleman is Mr Postlethwaites tutor!’ This is fact, as I am a living soul and right comfortably do I laugh at them. I mean to continue in their good opinion.” Not really the picture that we have of Branwell now! 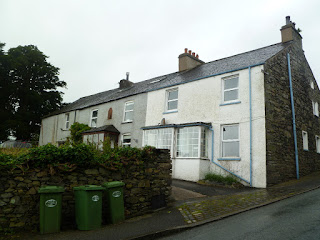 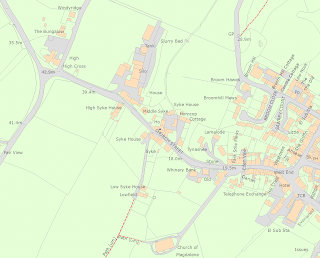 Branwell only remained tutor to the Postlethwaite family for a period of 6 months, being dismissed from his post for “negligence”. This seemed to be an indirect result of Branwell’s meeting with Hartley Coleridge on 1st May 1840.  Branwell had been occupied with a translation of Horace’s Odes, and on 20th April had sent a specimen of his work to Hartley Coleridge (son of Samuel Taylor Coleridge) who lived at Nab Cottage, on the shores of Rydal water, mid-way between Grasmere and Ambleside. As this was only a ten-minutes’ walk away from our lodgings at Rydal, we said goodbye to Broughton and returned to Rydal for a visit to Nab Cottage. 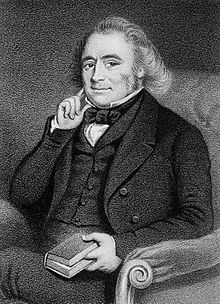 The result of Branwell’s letter to Coleridge was an invitation  for a visit to Nab Cottage, which  Branwell gladly accepted. On  1st May 1840 he spent a whole day with Coleridge and this day would remain a memorable day for Branwell, as he felt then that he was treated on an equal footing and was respected as a writer. He must have been very excited that finally he received a response to one of his letters, and he must have thought that a literary career would now be within his grasp.
Hartley Coleridge and Branwell Brontë had some things in common, although they came from very different backgrounds. Coleridge certainly had his family relations and his formal education at Oxford as an advantage over Branwell. His father Samuel Taylor Coleridge had set up a trust fund for his son thus securing a financially comfortable life for him as a poet and philosopher. His connections with Southey (his uncle) and Wordsworth (friend of the family) also made the way to literary fame easier for Coleridge as it brought him an easier access to the publishing world.
Coleridge was really impressed with Branwell’s translation of the Odes and advised and encouraged him to continue these literary efforts, promising him to use his influence with the publication.
This visit must have triggered a “fire” in Branwell to pursue his literary ambitions again. From then on his noble attempts to continue ”in the good opinion of his employers” were blown up completely and he started to neglect the duties for which he was employed. His employer was alarmed and was keeping a close eye on his tutor. When one day in June Branwell was out, met a friend and did not return to Broughton in the evening as expected, Mr. Postlethwaite’s brother William rode out in search of Branwell and eventually found him in a drunken state and brought him back. This meant of course the end of Branwell’s employment as he was dismissed immediately. On questioning his sons, Mr. Postlethwaite had discovered that Branwell had taught them very little, spending most of their lesson-times outside the house sketching and writing.

Branwell was convinced that Hartley Coleridge would help him in his literary ambitions, but for some unknown reason this has never happened.

Nab Cottage still exists today, although it has been turned into a holiday accommodation and can only be visited if one enters it for holiday purposes. It stands in a sheltered position high over the winding Rydal Road, backed by Nab Scar, with a beautiful view over Rydal water. According to the datestone above the porch, it was built in 1702. It is a long low white building with a beautiful porch, covered with ivy and rose bushes and a lovely small cottage garden in the front. 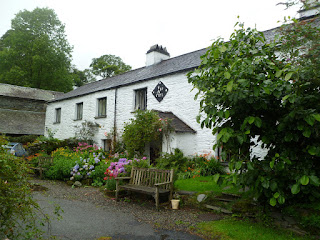 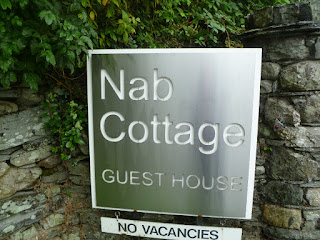 This concluded our second day at the Lake District. It had been a fascinating and very interesting visit. Before coming to the Lake District I had done some reading on Wordsworth, Coleridge (S.T and Hartley) and Southey, especially through an interesting book  called “The Poets’ Daughters – Dora Wordsworth and Sara Coleridge” by Katie Waldegrave. I also read a lot of articles on the links between the Brontës and the Lake District. Of course this information is also included in many Brontë biographies.

The next morning we sadly said goodbye to this beautiful place with its stunning scenery and continued our journey towards home.

Sources and further recommended reading:
“The poets’ daughters” (by Katie Waldegrave): on the lives of Dora Wordsworth and Sara Coleridge (gives a very good insight into the lives of the Lakeside Poets Wordsworth, Coleridge and Southey)
“A Brougthon Miscellany” and “A second Broughton Miscellany”: pages on the history of Broughton- in-Furness by W. Greenhalgh (with illustrations by Enid B. Greenhalgh)
“Branwell Brontë – a biography” by Winifred Gérin
“The infernal world of Branwell Brontë” by Daphne du Maurier

Posted by Lisbeth at Wednesday, September 20, 2017