Mapping the Brussels of the Brontës: Friends I, Mary and Martha Taylor, Koekelberg

Charlotte and Emily will have quite often walked to Koekelberg, to visit Mary and Martha Taylor, just as they will have regularly walked to the Pensionnat Heger to visit the Brontë sisters. The pictures below show how they would have walked. Nowadays one can still do this walk, apart only from the Rue d’Isabelle and part of Rue Terarken bit. 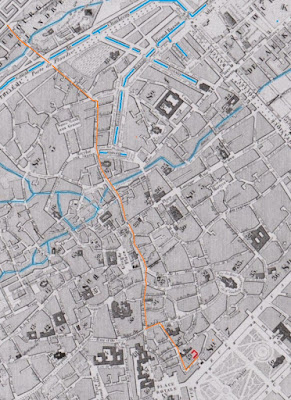 When starting the walk at the Koekelberg Pensionnat there were two options. The main route was the eastern way, the Chaussée de Gand. As the name indicates this road led to Gent. Thus these maps also show the last stage of the route of the diligence that brought the Brontës to the city (see Calendar, 14 February 1842). The road on the west was quieter. These routes come together in Molenbeek. The city was entered at the Porte de Flandre (more about the Portes later).

Molenbeek was growing quite rapidly. The Journal de Bruxelles wrote on 11 June 1842 that “everyday Molenbeek sees the number of shops and factories growing […], soon this faubourg will no longer form just one group of buildings.” On the 1st of January of that year the number of inhabitants of this town was 7495 (l’Indépendant, 24 Jan).

Koekelberg was little more than a hamlet. It appears from the newspapers that little had changed since 1830, the year the plan shown above was drawn. Since then though much has, for instance also at the place where the Pensionnat of Madame Goussaert née Catherine Phelps was situated. An old painting shows it without any other nearby building. Nowadays the place where the building once stood is completely surrounded by houses and a wall, making it a rather frustrating place for the Brontë traveller.

Thanks to aerial pictures we can though see what it looks like behind these houses. There are some big trees now on the site of the old pensionnat, from which Mary Taylor wrote her letters to Charlotte in the autumn of 1841 which inspired her to go to Brussels, with the idea to go to there for schooling. Mary wrote of  “pictures the most exquisite - and cathedrals the most venerable” she had seen in the city of Brussels. Surely, Charlotte concluded, it must be “one of the most splendid capitals of Europe.” Mary had arrived in May 1841. She had had plenty of time to see the city.
Knowing that Mary and Martha Taylor would be living nearby must have added quite a lot of weight too in the debate about which place exactly to go to. It is in Koekelberg where the Brontë Brussels story started, thanks to Mary, at the site of these trees.


Madame Goussaert was a driving force in the village. She was the president of the committee that organized a big art exhibition in Koekelberg in the autumn of 1842, undoubtedly visited by the Brontë and Taylor sisters. It was intended to raise money for a new church. In the 20th century a big basilica would be built in Koekelberg.