Mapping the Brussels of the Brontës, part 1. The 1841 plan

Cartography has been a rather neglected part of Brontë Brussels history, apart of course from the Quartier Isabelle, thanks to Selina Busch. With the aid of computer techniques and an excellent plan of Brussels, dated 1841, it is nowadays very well possible to show the city and all the many relevant places. The map gives a very good idea of what the city looked like when the Brontës arrived. It also shows the locations of many specific buildings. It seems possible that the Brontë sisters used this map when going out for a walk, at the beginning. Without a map one could quite easily get lost. The plan is foldable, and as one can see, easily in four smaller parts.

We have first digitally removed the black cross lines, which already gives a prettier result. 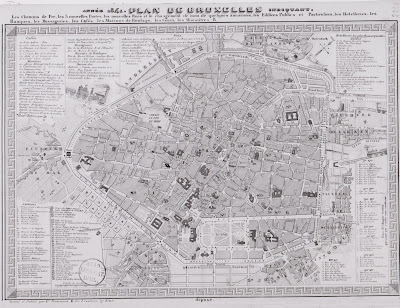 Then a version was made with the Pensionnat indicated on it (in red), and with the Senne river, the Petite-Senne and canals shown too (in blue). It is easy to forget nowadays, as the rivers have completely disappeared from view, but they made the city look rather different. 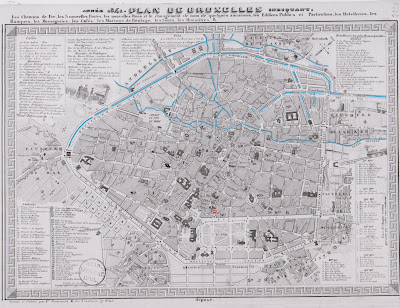 The adapted plan with the Senne, Petite-Senne and the canals, and the Pensionnat

It is also important to remember that as usual with Brussels maps they don’t present the right north-south direction. To do that the plan must be turned 50 degrees. 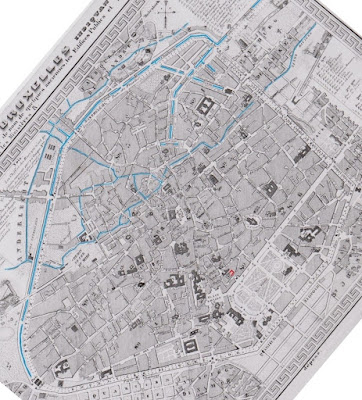 With this digitized and adapted plan (and a few others) it is also possible to show, for instance, all the places where the sisters’ friends were living, and how they would have walked to them. To show the cultural places of interest, or, when cutting out a small part of it, the walk on 15 February 1842 from the hotel to the Pensionnat, to present themselves there.

Brussels did change quite a lot in 1842. Another adapted map version will show many dots and circles at places where new houses were built, and old ones destroyed. This year also saw the beginning of the vaulting of the Senne.


These pictures can of course be downloaded, after which one has a plan which one can zoom in on, and see all the details.

The next illustration shows Brussels and the towns around it, the faubourgs in a wider perspective, seemingly surrounded by woodland, in 1840. 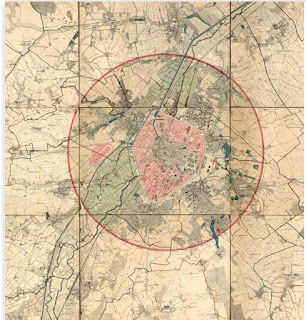 With thanks to René van Oers, for all the adaptations, here and later on