Post
Sending letters by official post was expensive, and finding alternative ways was a recurring theme in the letters of these years. This is also shown by the (semi-)advertisement of 23 September 1842, in which a person related to the Mr. Brown’s English bookshop offers to take letters to London. Negotiations between Britain and Belgium had begun in May about a ‘convention postale.’


Some letters the sisters wrote will have been sent from a post-office. There were six of them in the city. On the following map one can see the approximate locations. The main office is indicated in red - it was also located on the old 1841 map, as the “Grande Poste aux Lettres.” There were five ‘bureaus secondaires’ of which the one at Montagne de la Cour 44 was closest to the Pensionnat. 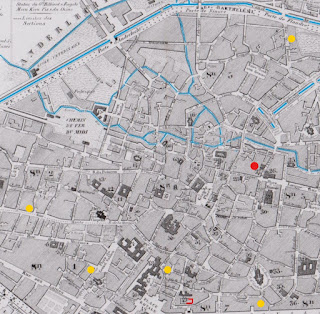 A plaque in the Rue de la Régence, not fat from where the Dixons were living, later on, commemorates that: ‘Until 1872 here stood the mansion of the Princes de la Tour and de Tassis, close to which François de Tassis organised the first international postal service in 1516.’

Mary Taylor
This letter of 9 September 1841 shows that Mary Taylor wasn’t a pupil at the Koekelberg pensionnat yet, at that time. She and her brother John had apparently been on a tour on the Continent, which lasted several months. Her letter to Charlotte, about the cathedrals, will have been written before August. Charlotte’s letter to Ellen Nussey, in which she spoke about the letter from Mary Taylor, was written on 7 August. By the end of July Mary and her brother must already have visited some cities with cathedrals, possibly then in northern France. In August they would at least have gone to Germany one would suspect, and possibly to Italy, in the traditional English way to do a tour of the Continent.

Mary Taylor won’t have been residing at the Château de Koekelberg, as that pensionnat was known, before October 1841. Who knows though, Martha Taylor’s letters, from the Koekelberg pensionnat, may also well have inspired to come to Brussels.

On 29 September Charlotte wrote a letter to her Aunt Branwell, in which she said that “I would not go to France or to Paris. I would go to Brussels, in Belgium.” It had, she added, also the pleasure of being able to regularly see Mary and Martha Taylor, and they and their cousins, the Dixons, would probably help to get “in time be introduced to connections far more improving, polished, and cultivated, than any I have yet known.” With the aid of the Rev. Jenkins they would be able to find a good school in Brussels, she stated too. It took about three months, but eventually that happened.