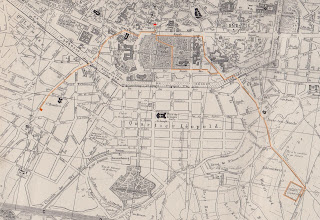 1. The Dixons
The Dixon family has so far been neglected on this blog, and to add to that I have previously mislocated the house where they were living. In my first book I wrote the house still exists, but that’s not true. I had wrongly assumed that the present day Rue de la Régence nr 11 was also the nr 11 of 1842. The correct location can be seen on the first plan. (The wrong location, or present day nr 11, actually lies in what was then the Rue de l’Arbre, beyond the Sablon Church.)

The first time Abraham Dixon was mentioned in a Brussels newspaper was on 28 October 1841, in l’Indépendant.

The texts are always like these. Dixon, between 28 October 1841 and 14 October 1841, obtained 27 patents. Of these 23 were a brevêt d’importation, 3 were a brevêt d’invention, and there was 1 brevêt d’addition et de perfectionnements. For these patents Dixon dealt with 27 men, with a W.-H. Ritchie top scoring with 3 brevêts. In October 1842 we find him staying at the Dixons at Rue de la Régence 11. These brevêts d’invention were not inventions Dixon made. He traded in invention patents but was not an inventor. Interestingly, Rue de la Régence 10 is regularly mentioned as an address too for inventors and patent holders.

Until early June 1842 at least Abraham Dixon (1779-1850) was residing in Ostend, but he also had a house in Leeds. Indeed, in a letter of 31 May/3 June 1842 to his daughter Mary he writes about a new, quite big house in Ostend (Brontë Parsonage Museum, Dixon Papers). It’s unclear when exactly he moved to Rue de la Régence 11.

This letter also makes  clear that Mary Dixon still had not come to Brussels yet. It was sent to Leeds, as the following picture with the address shows.


Abraham had married Laetitia Taylor (b. 1780), an aunt of Mary and Martha. She died in early 1842, probably in Yorkshire, but surely not in Brussels. Joan Stevens, in her great work Mary Taylor. Friend of Charlotte Brontë. Letters from New Zealand and Elsewhere (Auckland 1972) stated that, when the Brontës arrived, “Abraham Dixon, Mary’s uncle, was living in the city, in the Rue de la Régence, where members of his family often visited him. Mary, his only surviving daughter, was constantly there, while his fourteen year old nephew William Henry Taylor worked with him in some kind of apprenticeship. Also in Brussels was Dixon’s fifth son, Thomas, studying engineering and taking German lessons from King Leopold’s librarian.” As shown though above, it can’t have been before June 1842 that he moved to Brussels.

After the death of Martha Taylor in October 1842 her sister Mary spent some days at the Dixons’ house, at the Rue de la Régence. In a letter to Ellen Nussey she wrote that she found the Dixons “very different to what I expected. They are the most united affectionate family I ever met with. They have taken me as one of themselves and made me such a comfortable happy home that I should like to live here all my life.”

While Dixon’s patent trade in Belgium was never much of a success, it clearly suffered a blow in July 1843. On the 24th he wrote, to Mary, that the “Belgian government have declined to use Kydn’s process, this is mortifying after all the trouble and expense which I have had with it.” Before this misfortune Mary Dixon had already left Brussels, for Germany – “I received your letter from Königswinter” Abraham writes. Some time later we also find her in Rotterdam.

He also wrote that “under the circumstances which have taken pace the last year I find the cost of the house Rue de la Régence more than I can support, indeed the expense with not receiving the money that I had calculated upon when I bought the furniture …”

Abraham still had this house in Brussels on 30 December 1843, from where he wrote this quite well-known line: “I received your very short letter dated Ilkley 28 sep. this I send by Miss Brontë who leaves on Sunday for her home, and does not mean to return.” He also reported that “Miss Brontë and others with myself” dined at the Jenkinses on Christmas Day. He was then selling his furniture, and was still trying to sell the Rue de la Régence house (and still had a house in Ostend).

2. The Wheelwrights
The Wheelwrights were living at the Hôtel Cluysenaar, Rue Royale 53 (now nrs. 101-3), better known perhaps as the Astoria Hotel. The history of this building has been well described in this BBG blog 2015 article.

The future is still as uncertain as it was then, or, as Brian Bracken has observed, the place is now “just as dead and unlikely to reopen as ever!” In 2016 Corinthia Hotels bought the hotel from a Saudi owner, saying they intended to reopen it in 2019. This clearly won’t happen. It may be partly explained by the fact that the hotel is on the list of monumental, protected buildings. Corinthia though must have known that, in 2016. They now deliberately opt to make the building a ruin, it would appear.

We know of a few other people who were living at the Hôtel Cluysenaar, from the newspapers. A theologian named Paléologue was, in May 1842, ‘continuing to give courses in literature and in oriental and Greek eloquence.’ A man named Decker began advertising in August, for his ‘depot with carbon filters, to purify water. These filters are especially useful at the time of autumnal fevers which doctors often attribute to poor water quality.’

3. The Protestant cemetery
Charlotte in 1843 regularly walked to the Protestant cemetery, where Martha Taylor and Julia Wheelwright lay buried. The site has been described too here, in this 2008 article. It was a fairly straightforward walk, especially after leaving the city at the Porte de Louvain, as can be seen on the map above.

4. The Jenkinses
It was also a straightforward walk to where the Jenkins family was living, in Ixelles. This place has also been well described earlier, in this 2010 article. This walk went through the Porte de Namur.
As with the Taylor sisters, the walks presented here, and thus the main streets, leading to the friends, haven’t changed. Within the city, especially in the part of it shown here, not that much has changed en route. It’s in the suburbs where it is hard to spot a building that was there in Charlotte’s time. That doesn’t make these walks less interesting to do nowadays.