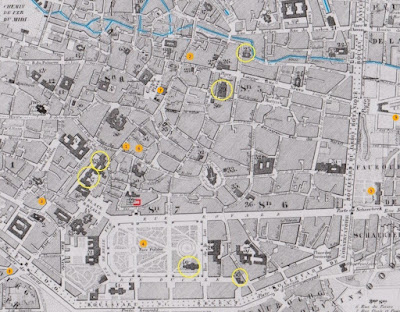 2. Salle de la Société Philharmonique (Rue Marché-aux-Poulets)
On 11 February 1842 the Société Philharmonique opened its new building. The exact location, apart from the street, is not known. On 18 May the Moniteur belge reported that the building “will be embellished with a monumental façade,” designed by Cluysenaar.
It is interesting to note that here, on 25 May 1842, the works of Carolina Uccelli were performed, conducted by herself apparently. She was a renowned composer. Her daughter, as a singer, also featured on the stage.

3. Conservatoire Royale (Rue de Bodenbroeck)
It’s unlikely the Brontë sisters ever visited the Conservatoire. No concerts were held there. Their musicians gave performances at other places in the city. W. Gérin states Emily had piano lessons from M. Chapelle, “a professor of the Conservatoire,” but that is only another blatant falsehood by Gérin. She just invented that herself. There is just no evidence for it. Later in the 19th century the Conservatoire moved to a place nearby, in the Rue de la Régence, where it’s still housed.

4. The kiosk in the Park
There were many concerts in the Park, sometimes free, or sometimes for only 50 centimes, in a reserved space. One wonders though how they would have fenced off such an “enceinte reservée” which occasionally even hosted the King and Queen. The Park itself didn’t even have a gate around it. Both the orchestras of the Société de la Grande Harmonie and the Société Philharmonique performed here. Given the size of the kiosk though it can’t have been the full orchestras. It was chamber music surely that was mostly performed.
The kiosk, still there, was only half a year old, when the sisters arrived. It replaced an older one, elsewhere in the Park, which existed until September 1841.

5. Jardin Botanique
Every Tuesday, between the beginning of May and the end of September 1842, the Société Philharmonique gave concerts in the Jardin Botanique (building). Obviously though the Botanical Garden itself will have been a very nice place to visit. In late August 1842 the Brontës and the Hégers may have seen a very rare flowering Agave Americana here.

6. Musée phrenologique (Rue des Armuriers)
In 1840 a phrenological museum was founded. It’s not clear if it still existed in 1842, but if it did Charlotte may well have visited it. She had, as reflected in her novels, a keen interest in phrenology, the by now long discredited ‘science’ of establishing someone’s character by the sizes of the skull.

7. Brood Huis/Salle de la Loyauté (Grote Markt/Grand Place)
This building, now the City Museum, occasionally hosted concerts given by the orchestra of the Conservatoire Royale. It is not the original building we can see now though. That was torn down and it was rebuilt in the 1870s.
It must have had a big enough stage for a full orchestra with a choir, in view of the works performed on 13 March 1842. 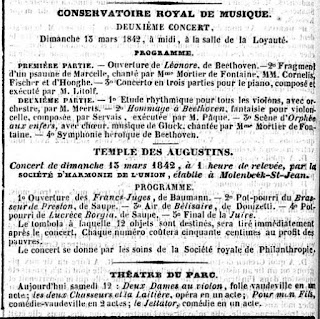 25. Temple des Augustins
The Temple des Augustins was the place where both concerts and exhibitions were held. It had been built in the 17th century, as a church for the Augustine monks. Between 1815 and 1830, the ‘Dutch’ period, it was the Protestant church in Brussels. By the time the sisters arrived it had been revived as a cultural place. It was demolished in 1893, but the façade survived. It was transplanted to the Église de la Sainte-Trinité in Ixelles.
Both the Conservatoire Royale and the Athenée Royale used the Temple des Augustins for their ‘distibution of prizes’ (distribution des prix). Indeed, as the Journal de Bruxelles points out, M. Héger’s speeches at these occasions in  both 1842 and 1843, on 15 August, were given at the Temple des Augustins. He gave a copy of his 1843 talk to Emily (not held thus at the Athenée, as Juliet Barker says in The Brontës).
It was here too that in 1842 both Liszt (on 24 July) and Berlioz (9 October) performed.

29. Théâtre Royale (Place de la Monnaie)
In the long hot summer of 1842 the famous actress Rachel drew large crowds at the Théâtre Royale. Thousands of persons must have seen at least one of her performances.  Although Charlotte did have a chapter about Rachel in Villette, she denied having seen her in Brussels (in 1851, after having seen her perform in London). It is of course still well possible that she and Emily visited this Royal Theatre.

38. Salle des Concerts (Rue Ducale)
This concert hall closed its doors at around the time of the Brontës’ arrival in the city, but it is well possible that Constantin and Zoë Héger had gone to concerts here in the years before. After its closure an evangelical Protestant church took over the building.

40. Waux-Hall, or Théatre du Parc
The sisters will often have seen this building, situated within the Park. They could have gone to concerts, and theatre plays, being performed here. It appears that they mostly did ‘vaudeville’ theatre (see the picture above), which can be compared to musicals. But it certainly was also a good place for good classical music concerts, organized by the Société du Concert-Noble. One part of the large building was occupied by the café Velloni.

Other places, events, entertainment
A new museum opened its doors on 9 April 1842, the Musée d’armes et d’armures, of weaponry and heraldry. The address isn’t known.

The Brontës and the Hégers could also have gone to flower shows. He of course would certainly have, being a keen gardener. The first one began already on 28 February 1842. On the 20th of June a flower show was opened in the Rotonde au Musee, the Palais des Arts (nr 47 on the plan). There were more than 900 plants, as well as some 500 cultivated roses, the Journal de Bruxelles reported.

In September 1842 a show of magic and phantasmagoria began to be performed, by a Monsieur Weiss, “prestidigitateur,” in the “Grand Salon, dit Palais Royal, hors la porte de Namur” (nr 8 on the plan). A bit later on he also did his tricks at the Grand Place, at the Salle du Cygne (near nr 7 on the map). Prices ranged from 50 centimes to one franc.

They may also have gone to the Theatre of Lions, near the railway’s North Station (nr 9 on the plan, given as an approximate location), which began its performances in early October 1842. Some days later it was reported they also had an enormous snake, a python or a boa. (Both names were given but it can’t be both.)

Another venue given as a place for a concert is the ‘Jardin des Feés, ancient Tivoli.’ This place was situated in Laeken (not that far from nr 9 on the plan). It is also interesting to note that, as can be seen on the picture above, even a small town like Molenbeek, situated between Brussels and Koekelberg, had its own good orchestra, the Société d’Harmonie de l’Union. Koekelberg itself, where Mary and Martha Taylor stayed, had a quite big art exhibition in the autumn of 1842, for the benefit of a new church.

Most of these events were cheap to visit, and most of these events and exhibitions had a tombola or lottery at the end, in which one could win one of the paintings exposed for instance. As Charlotte points out in Villette, this was usually done for ‘the benefit of the poor.’ In other cases, such as the 1842 Salon, it will also have been an additional source to cover the costs. Fanny Geefs’ La vie d’une femme painting, described by Charlotte in Villette, was one bought by the “commision directrice de l’exposition des Beaux-Arts” for the lottery, the newspapers reported in late August, shortly after the Salon had opened.

Lucy Snowe once won a prize.” Slowly and with difficulty we made our way along the passage, and at last regained our seats. The drawing of the lottery lasted nearly an hour; it was an animating and amusing scene; and as we each held tickets, we shared in the alternations of hope and fear raised by each turn of the wheel. Two little girls, of five and six years old, drew the numbers: and the prizes were duly proclaimed from the platform. These prizes were numerous, though of small value. It so fell out that Dr. John and I each gained one: mine was a cigar-case, his a lady's head-dress—a most airy sort of blue and silver turban, with a streamer of plumage on one side, like a snowy cloud. He was excessively anxious to make an exchange; but I could not be brought to hear reason, and to this day I keep my cigar-case: it serves, when I look at it, to remind me of old times, and one happy evening” (Villette, Chapter XX, The Concert).

Apart from this all, there were also a good many bookshops in this culturally exciting city, additional cultural places in their own way. They will be documented later. The city itself was at that time still a beautiful old city, full of architectural art. And at the same time the young capital of the young new nation of Belgium, which attracted the best artists of the time to come to Brussels.