8 April, Friday – W: 2 to 9 C, a fairly bright day
The papers report that in 1841 about 600,000 hectoliters of beer have been consumed in Brussels in 1841. It is worth pointing out that at this time still, beer with only a bit of alcohol was a normal drink, as it was better than much water of dubious quality. And certainly better than the water of the Senne.

9 April, Saturday – W: -1 to 4 C, a grey day
The new Musée des Armures opened its doors for the public on this day, a museum with weapons, and heraldry, about military history. (Unfortunately I haven’t been able to find out where it was situated.) The newspapers report that the poplars, alongside the Jardin Botanique, beyond the Porte de Schaerbeek, will be cut down, in order to “give a convenient entrance to the Garden from that side.”

10 April, Sunday – W: -1 to 6 C, clouds
At the occasion of the celebration of the birthday (9 April, actually) of the young crown prince, later king Leopold II, a military parade was held, close to the Pensionnat. It started at the Place Royale, went to the Rue Royale and after the Park took a turn to pass by the parliament (nr. 39 on the plan, as ‘Palais de la Nation’). It attracted a large crowd. 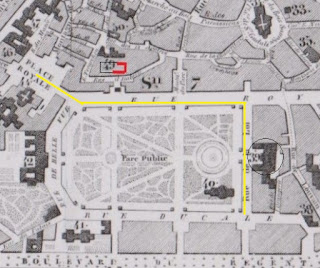 12 April, Tuesday – W: 1 to 5 C, clouded, a little bit of rain in the evening
L’Indépendant writes about new rules for the public transport in the city, by horse coaches.  From 20 May on omnibuses – big coaches that could carry 16 passengers – could only have two horses, not three. This surely was a measure taken to reduce their speed. There were many more smaller coaches, with one or two horses. A walker had to be quite careful, on the bigger streets (→ 19 April).

15 April, Friday – W: 2 to 10 C, clouded
The Journal de Bruxelles reports that “to the heavy rains of March a temperature has succeeded which is hardly less favourable to the agricultural interest. The north to northeast winds, which reign with violence since several days, are significantly delaying the growth of the vegetation. It has been freezing almost every night.” The wet times, it was added, had also caused a plaque of snails.
M. Heger can’t have been a happy gardener too. The Pensionnat’s garden was vulnerable to northeastern winds, whereas the building will have shielded the garden from the much more common southwestern winds. It also meant that he still for instance couldn’t move his orange trees, in tubs, outside.
The Journal also wrote, quoting the Irish Limerick Chronicle, that Charlotte’s hero, the Duke of Wellington had cried like a child when hearing about the disastrous news from Afghanistan (← 14 March).

16 April, Saturday – W: 1 to 7 C, quite clouded, strong wind
In more abnormal weather news the Journal de Bruxelles writes about frosty weather in France, and frost and snow in Spain.

17 April, Sunday – W: 1 to 9 C, grey (according to statistics of the Belgian Metereological Institute this 1842 day still holds the record of having the lowest minimum temperature recorded, for 17 April: - 2.9 C)
On this day Charlotte finished her second devoir: Sacrifice d’une veuve indienne.

18 April, Monday – W: 1 to 10 C, murky
Charlotte finished her next devoir on this day, La jeune fille malade. It suggests she had spent much of the Sunday writing on these two essays, rather than spending the day for instance with the Taylors.
The papers write about the recent meeting of the City Council, in which it was decided  to approve of “a transaction between the city and M. Hauman, concerning the two buildings elevated near the Belliard statue. It is said the conditions are advantageous to M. Hauman.” These two buildings were at the opposite side of the street of the Pensionnat. (← 22 March: → 21 April)

19 April, Tuesday – W: 5 to 11 C, clouded
The Journal de Bruxelles begins a new feuilleton story, Une journée à Londres. Charlotte surely would have been interested to read about this journey to London, taken from the Revue des deux mondes.
On this day, at about eight in the evening, L’Indépendant reported on the 22nd, a diligence rode down Montagne de la Cour with great speed, knocking over an employee of the Bazar de la Madeleine. The wheels rode over her legs and she was badly wounded. The paper continues with a complaint about these voitures which seem to think the streets were just designated for them, and not the pedestrians as in Paris (← 12 April).

21 April, Thursday – W: 5 to 14 C, a bit grey, but also quite sunny. Pleasant spring weather had finally arrived, on Charlotte Brontë’s 26th birthday!
If they won’t have gone out on this free afternoon, the sisters will probably have witnessed part of the following spectacle, as for once something did happen in the Rue d’Isabelle:
“Yesterday,” the Journal de Bruxelles reported the next day, “at about 4 pm, a squad of sergeants of the city stirred the most quiet quarter situated in the center of the capital. The police intended to scare some children whose curiosity had led them to the souterrains of the buildings under construction in the Rue d’Isabelle … [these were] several children from good families, whose only crime it was to satisfy a very natural curiosity at their age.”

It can only refer to the two buildings opposite the Pensionnat referred to earlier, also because it states that the buildings are property of the city (← 18 April).
From this date on a military parade was given at the Place Royale every Thursday.
(As a curiosity for nowadays, L’Indépendant begins another feuilleton story on its front page in which a German “docteur Trump” features.)

24 April, Sunday – W: 7 to 23 C, some clouds
L’Indépendant, on the 26th, wrote that there had been a heavy thunderstorm with torrential rain in Leuven (or Louvain) on this day, but not a single drop of rain fell in Brussels.

28 April, Thursday – W: 11 to 22 C, a bit clouded
The Journal de Bruxelles wrote about a rumour circulating about misbehaving pupils of the Athenée, without giving any further details (→ 1 May).